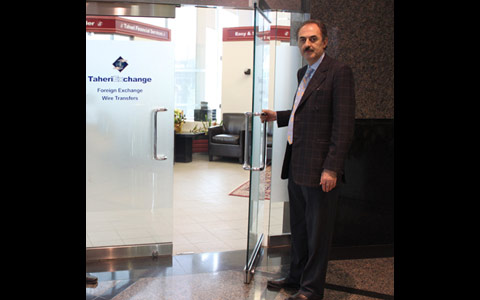 Sima Sahar Zerehi – It’s a family business like so many others in Tehranto, the father passing on the torch to his oldest son, teaching him the family trade, and stepping back ever so slowly from the daily tasks to allow for junior to take the reigns.

The business is Taheri Exchange, a foreign exchange company based in Toronto.   The office is located on the ground floor of one of the new high-rises on Yonge just north of Finch. A security guard is posted by the frosted-glass doors that open from the marble lobby of the building onto the offices.

The main reception space is decorated with a Persian rug and sleek leather chairs; the front offices are glass open-concept rooms that speak of transparency.  The website bills the business as a foreign exchange company based in Canada with a global perspective. Overall the exchange company resembles a sleek bank branch, a testament to its success.

Saeid Taheri a tall middle-aged man, distinguished by his graying hair and dark contemplative eyes created the company.  He looks like a man with a thousand stories to tell, the kind of person that you want to take out for a drink so he can share his tales of the days gone by.  But Saeid Taheri is not one to tell-tales out of school.  His words are measured and his conversation is tempered by his age and experience.

His son Ehsan Taheri, a verbose young man with a Canadian education and modern business sense is the one who acts as the spokesperson for his father’s business.  Like so many children who step into the family business, Ehsan is protective of the company and his father’s legacy.

He speaks about Taheri exchange with pride. “My father ventured into the financial services industry in 1987.”  He continues, “the market was very receptive at that time.”

“The company started when Toronto was a city with a growing new immigrant population. In those times, financial services were not specifically marketed to any ethnic immigrant groups as they are presently. Today, banks have marketing material in Farsi,” explains Ehsan.

He adds, “Most contemporary businesses try to appeal to other cultures. At that time it was not the case and as a new immigrant and student, my father witnessed that there was a demand that was not being met and a market being ignored.”

He recounts, “For many new immigrants at the time, Toronto was a large unfamiliar city with an unfamiliar language. Additionally, there was a cultural difference evident in the way customers were treated here. In other countries customers are treated with more formality, hospitality and respect, especially at the bank.”

Ehsan adds, “Certain segments of the financial industry and certain communities that we felt had a lot of potential, were being ignored by the bigger players. There was a need within the community that had to be addressed.”

Like so many other businesses in Tehranto, Taheri Exchange, had very modest beginnings.  Ehsan notes, “The Company originally conducted business in a humble one room office at Yonge and Eglinton.”

The business started as a one-man operation.  “It started with just my father,” explains Ehsan, “I was still in elementary school at the time. He would work long days. He could not leave the office from open to close because he was the only person there.”

Ehsan describes why these customers gravitated towards Taheri Exchange.  He states, “They were in an unfamiliar country, and did not know who they could trust. Some had just arrived and brought their savings with themselves from the previous country they were in and needed to exchange it to Canadian dollars. Some who were here longer were working here and needed to send part of their earnings abroad to support dear ones outside Canada. Others still were recipients of support and needed to receive money from outside Canada.”

Today Taheri Exchange is one of the business icons within Tehranto.  Ehsan speaks of the company’s growth.  He states, “Since its inception, the company has changed completely. The industry has also changed. The business has changed its focus to the commercial market and away from retail.”

Much of the growth of the business has been in response to the changing needs of its clients.  Ehsan explains, “Over the years the growth in any area of our business has been directly related to our client base. As the needs of clients and the community changed, we responded to those needs.”

The Iranian community in Toronto has grown over the years and this population increase has been good news for businesses like Taheri exchange that cater to residents of Tehranto.  Ehsan recounts, “The community we serve has grown in size and success and our success is directly related to that. We currently convert currency in over one hundred different currency pairs. We have a foreign currency analyst. We send out daily analyses of the market to our commercial clients. In total we had more than 22,000 customers in our database last time I checked.”

Taheri Exchange has had to adapt to the growing needs of its customers over the years.  Ehsan explains, “Most of the changes that have affected us are a result of the demand that has transformed. In the beginning, a client who had just arrived needing to convert his or her foreign currency to Canadian dollars was common. Over time it reversed and became common for us to have clients who needed foreign currency for their vacations or to buy products. Later still our clients became businesses and we catered to their financial needs.”

However, Taheri exchange is no longer exclusively relying on Iranian-Canadian customers.  “Today our most common clients are Canadian corporations needing access to foreign exchange to conduct international trade. Our current commercial clients include some impressive accounts which I cannot directly allude to for respect of their privacy rights,” states Ehsan.

Despite its success Taheri Exchange has had to overcome barriers due to its roots within the Iranian-Canadian community.

Ehsan speaks to the nature of these challenges, “There is a natural tendency for Iranian-Canadian customers to gravitate towards our business,” he notes.  He explains that while this clientele has made the business a success it has also created some challenges, “there are concerns within the financial services industry about certain countries and Iran is currently one of those countries.”

Ehsan also speaks about how stereotypes and prejudices sometimes affect their business.  He notes, “When we try to land a commercial client, sometimes there is some reluctance by the prospective client to deal with a firm that has an Iranian name. We are coping with that stereotype. As time went on, our corporate identity overcame that stereotype, but it took and still takes a lot of hard work.”

Despite these challenges, Taheri Exchange has thrived over the years.  Ehsan speaks with pride about the legacy of his family’s business in Tehranto.  He boasts, “The Company has been seen as a leader and an inspiration to the community. Since the beginning, the company has been breaking barriers. From being the first to provide financial services to the Iranian-Canadian community, to being the first Iranian-Canadian company to provide financial services to the Canadian community, we have always tried to lead by setting a good example.”

Taheri Exchange has been a fixture in Tehranto for over two decades; during its twenty-four years of service the financial exchange company has had a direct role in growing Tehranto’s businesses.  Ehsan explains, “There was a time when you did not see Iranian businesses lining both sides of the street from North York to Richmond Hill. Our business provided financing to many newcomers who had a dream, a good business plan, but needed financing.”

Taheri Exchange has also played a role in fostering various community-oriented projects over the years.  Ehsan recounts, “The Company has had a charitable role where it sponsored artistic events and several community sports teams for ages ranging from young children to adults.”

Above all, Taheri Exchange has often acted as a financial guide to many newcomers unfamiliar with Canada’s financial practices.  Ehsan states, “We have also had a role of providing guidance. Our customers would call us, and some still do, to ask general questions not related to our business, because they generally view our business as knowledgeable and dependable. My father received an award from the Province of Ontario for ten years of volunteer service in the community.”

Before walking out of Taheri Exchange I turn to Saeid Taheri to ask him what he thinks of the new generation stepping into our parents’ footsteps.  He smiles a knowing smile and says “I feel very hopeful for the future, but I just wish your generation paid more attention to the knowledge and experiences gained by our generation.”

Racists, Reformists and Revolutionaries: A Conversation with Yousef Azizi Benitorof