Sima Sahar Zerehi – The media is penned behind a fence about twenty feet-away, far enough to be eliminated from the carefully constructed made-for-TV shot of the politician presiding over a handpicked crowd of supporters dutifully nodding in agreement to his pre-packaged speech.

His remarks come to an end and the fenced-out reporters begin to shout their questions from behind the metal barriers, straining their voices and standing on their tiptoes to be seen and heard by the politician who dismisses them like misbehaving children. 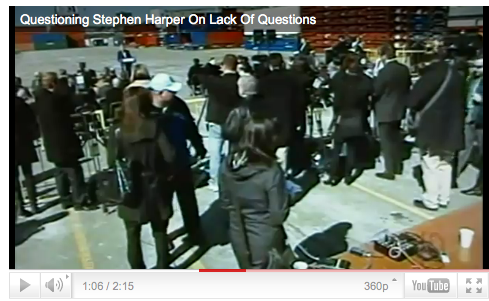 The question posed by frustrated journalist after journalist in multiple languages, “Why are we limited to asking only five questions a day?”

A young university student and first time voter is thrown out of a political rally for being a suspected supporter of another candidate.  The student who wanted to attend the rally in order to learn more about the political leader before voting for the first time, was required to pre-register for the event. When she arrived at the rally she was escorted out of the venue by a police officer.

A background check conducted on the 19-year old by the political aids of the leader had unearthed a picture posted on her Facebook of her meeting another candidate at a rally for an opposing party.

A consortium of mainstream national broadcasters decide that one of the leaders of a major Federal Party would be excluded from the national televised debates.

No I’m not writing about the rigged elections in Iran, or the political games that Libyan dictator Muammar Gaddafi plays with his state-controlled media outlets, these violations of democracy bare a distinctly “Made in Canada” stamp.

Yes, polite, unassuming Canada is the country that is currently making a mockery of the democratic process.

While our Prime Minister, Stephen Harper boasts about open government and transparency in politics he is controlling the media and public access on his campaign trail to such an extent that it would make even celebrity dictators like Ahmadinejad and Gaddafi blush.

Harper is refusing to answer more than five questions a day from media and is conducting thorough background checks on anyone who wants to attend one of his events along the campaign trail.

I’m sure in some corner of North Africa or the Middle East some despot is scratching his head while mumbling, “that Harper, why didn’t I think of that?”

Meanwhile, our most respected national media outlets, namely the CBC/Radio-Canada, CTV, Global and TVA decided this past week that federal Green Party leader Elizabeth May would be excluded from the English and French debates.

I wonder if Canadian history books will look back at the 41st election as the election that killed democracy.

Will this 41st election in Canada be like the US presidential election of 2000 between George W. Bush and Al Gore, where the Florida chad fiasco showed the entire world how hypocritical the US claim to democracy was?

In a year that has seen democratic movements blossom in places considered too hostile for the cultivation of such a delicate flower, it would be a shame to allow Canadian politeness, complacency, or apathy to erode our democratic system from the flawed system that it is to a ridiculous farce.

Those of you who have fought for your right to vote, those of us who are still fighting shoulder to shoulder with our family members’ and friends’ right to vote in other regions, we know that this is not what democracy should look like.

Ethnic Community Votes: Have we learned our lesson yet?