Sima Sahar Zerehi – On Sunday October 3rd, hundreds of hungry Richmond Hill residents and foodies swarmed to the Richmond Green Sports Centre for the town’s fourth annual Taste of the Hill multicultural food festival.  The annual celebration embraces the distinct cultural flavours of the community and brings them together while raising money for local charities.  This year’s event supported the Canadian Diabetes Association and Yellow Brick House – an organization that offers shelter and counselling for homeless and battered women and their children.

As platter after platter of delicacies ranging from Dim Sum to Kabobs were being peddled by the town’s various restaurants I couldn’t help but consider how this event was an apropos analogy for Richmond Hill’s emerging political profile.

If Richmond Hill were a dish, it would definitely be classified as fusion, a cuisine that combines elements of various traditions without conforming to any single style.  A nibble of Richmond Hill politics reveals that this town has a unique flavour, a distinct taste that can only be derived when combining the singular elements that make up this region.

Despite its unassuming and almost too stereotypically Canadian motto of  “a little north, a little nicer,” Richmond Hill is no longer a quaint little town but an emerging municipality on the move.

According to Statistics Canada, Richmond Hill continues to be one of Canada’s fastest growing municipalities. Presently, the population is approximately 181,000 and it is estimated that by the year 2021, the Town will reach 200,000.

Currently the Town of Richmond Hill consists of six Wards stretching from Bathurst eastward to Highway 404 and from Highway 407 East/Highway 7 East northwards to Bloomington road.

On October 25th, Election Day, voters in Richmond Hill will elect positions for the offices of Mayor, two Regional and Local Councillors, six Ward Councillors (one for each Ward) and two Trustees for the English Public, English Separate and French Public School Boards. The candidate for the French Separate School Board has been acclaimed.

However, this election will mark a much-anticipated turning point for Richmond Hill.  As more and more people migrate from overcrowded, overpriced and according to some over-hyped Toronto to the 905, regions like Richmond Hill not only grow in numbers but also in terms of wielding greater economic and political power.

On December 2008 the federal government decided to give Ontario 10 new electoral ridings as part of their plan to grow the House of Commons from 308 to 330 seats. Although, where these new electoral ridings will be created has yet to be decided as they are contingent on the findings of the 2011 census, many speculate that Richmond Hill will be one of the beneficiaries of one of these new Ontario ridings.

Speaking about the possible addition of new wards, ridings and constituencies in Richmond Hill, he explains, “probably we will have one provincial and one municipal seat.”  According to Assadourian these new political seats will also signal new political powers for the region. 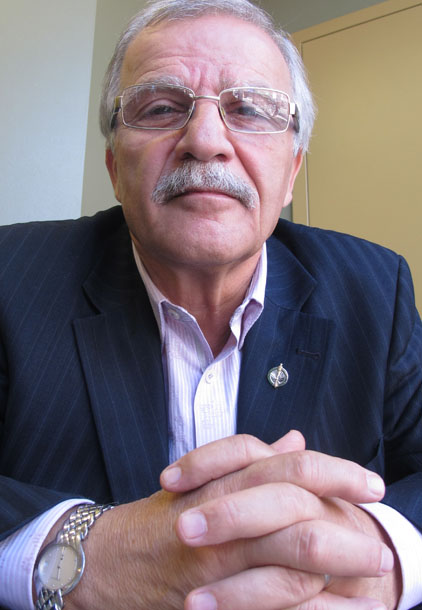 Assadourian who has decided to once again return to public life but this time as a candidate for City Council states: “there’s more opportunities to help people directly in municipal politics, there’s no party politics here.”

A resident of Richmond Hill, Assadourian is also a major promoter for the town.  He states, “Richmond Hill is the jewel of the North,” and adds, “It’s one of the safest and best cities in Canada.”  According to Assadourian people flock to the town because “it’s a good place to raise your family.”

Assadourian who is an immigrant of Armenian descent believes that the growth of Richmond Hill is part and parcel with the growth of the GTA as a metropolis that attracts new immigrants.

He explains, “Richmond Hill is growing and prospering as new immigrants are prospering and making economic life advancements. Residents in this town are living the Canadian dream in Richmond Hill.”

He believes that this growth also signals the need for the development and implementation of new policies.

“Now there’s new pressure on politicians to come up with solutions,” states Assadourian.

Assadourian explains that the residents of the 905 areas are looking for greater political engagement. When Assadourian was a Members of Parliament he championed the creation of two Federal caucuses, the second addressing the needs of the 905.  He declares, “We need to strive for a more open process to receive input.”

Godwin Chan, a veteran in Richmond Hill politics who is running for re-election as Councillor in Ward 6 echoes Assadourian’s assessment.  He states, “Given its strategically central location and the recognition as the only ‘Class A’ community in the Greater Toronto Area by the Conference Board of Canada, Richmond Hill is experiencing a transformation into urbanism that faces pressures for intensification.”

Assadourian also has big plans for growing and greening Richmond Hill.  He muses, “In Richmond Hill, we’re blessed to have a blank sheet.”

His goal if elected to city council is to make Richmond Hill a “self sufficient town,” where “people get involved directly” in municipal affairs.

He acknowledges that as the township grows so do its needs for more public services.  He states, “There are many services that we will need to improve on and expand on in town and I have many plans that strive to address the needs of every citizen in Richmond Hill.”

He notes, “Density justifies transportation expansion,” and adds, “The population and businesses have to be there to justify expenses.”

However, as Richmond Hill is predicted to grow he believes that this population increase heralds many promises for the township, including the construction of new subway lines that further connect Richmond Hill to the rest of the GTA.

He states, “The best thing for a city is that you have people living and working in the same area.”

Among his plans for the town is his aim to create a hub in Richmond Hill.  He explains, “I don’t think we need to have a downtown area with high-rises in every municipality,” and adds “but you should feel at ease here and know that the town has all the essential parts that you need for your daily life.”

Assadourian’s plans for the creation of a city centre in Richmond Hill includes moving city hall from its current location to Yonge and Major Mackenzie where the essential building blocks for a town hub have already begun to take root.  He notes, “There’s already a police station, hospital, and library there,” and adds, “There’s a huge amount of land there.”

He believes that the question that politician, residents and stakeholders in the town should be focusing on in the next decade is “How can we make the best use of that land to bring in business?”

Continuing to speak about his vision for turning the area near Yonge and Major Mackenzie into a Richmond Hill city centre Assadourian explains, “that land can be used the same way they use Richmond Green, you can go there with your family and enjoy the green space for a picnic, or go shopping in the nearby shops.”

“I don’t like the building of squares oriented to businesses only, I think we should build community spaces that integrate business centres with community centres,” clarifies Assadourian.

However, Assadourian admits that all these innovations will only be possible if the residents of Richmond Hill decide to take a more active role in the growing and building of the town.

He admits that unfortunately “the municipal election turnout is very low compared to provincial or federal turnouts.”

Assadourian believes that as an immigrant, he relates to the same issues as many other Richmond Hill residents from diverse backgrounds. “Like it or not we have the same problem,” he notes.  To build bridges with other communities, Assadourian works hard to establish ongoing communications with various community and ethnic media outlets as well as ensuring that his campaign material is available in multiple languages.

Although he is a champion of diversity at all levels of politics, Assadourian doesn’t want to get votes solely based on his ethnicity.  He states, “If people are going to vote based on ethnic origin, I have a problem.”

Instead Assadourian hopes to win votes based on his extensive political experience and community involvement, “I’m on two associations, the Richmond Hill Chamber of Commerce, and the Blood Donors Clinic,” he also adds “as an Member of Parliament I voted eleven times on the National Budget.  These are the experiences that I bring to the table as a candidate in Richmond Hill.”

Speaking of his successes, and his passion for public life, Assadourian states “Canada gave me more than I asked for,” and adds “now it’s my responsibility to share the benefit that I have gained in this country with those who are less fortunate.”