Sima Sahar Zerehi – Sometimes it takes an international festival to turn us on to local talents who have been living and working in our city and neighbourhoods for years.

It’s no surprise to any Torontonian worth their salt, that this is a creative city, we pride ourselves on being the host to world renowned arts events like the Toronto International Film Festival and Luminato. 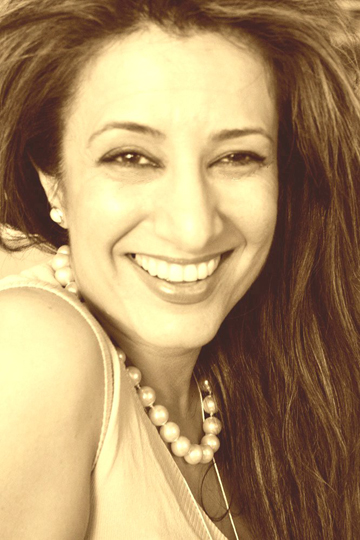 We know that we have arts wired into this city’s grid, after all we house the Canadian Opera Company, the Toronto Symphony Orchestra, the Art Gallery of Ontario, Factory Theatre, and Tarragon Theatre to name a few.

But being an arts destination can have its drawbacks.  Sometimes we are so focussed on catching the performances of guest artists that have travelled here to take advantage of our city’s diverse, cultured and enthusiastic audiences that we forget about our own local talents.

For Tehranto, Tirgan Festival, is our chance to showcase some of the Iranian community’s shining stars to the rest of the world, but it’s also a rare chance to meet some home-grown talents like vocalist Maryam Toumrai.

Toumrai is one of the many Toronto-based artists featured in the four-day festival hosted at Harbourfront.  Her music ranges from world music sounds with a Mediterranean flavour to opera.

In speaking about herself and her art, Toumrai reminds us that Tirgan is as much about celebrating the changing face of Canadian art and culture as it is about shining a spotlight on Iranian art.

“I am an Iranian but I’ve been in Canada most of my life, I’ve lived outside of Iran more than I’ve been in Iran,” admits Toumrai.  “For me, Tirgan is a part of Canada as much as it’s a part of the Iranian community.”

Toumrai has been a Toronto resident for over twenty years; she completed her studies at York University’s Creative Arts Program. In fact, it was in Toronto that Toumrai turned her childhood hobby of singing into a profession.

Being in Toronto provided Toumrai the opportunity to work with some of the best in the industry, getting access to the kind of world-class training that allowed her to pursue music on a professional level.

“In the 90s I had the opportunity to work with Elaine Overholt.  She was a voice coach for the actors in the film Chicago that was filmed here,” recounts Toumrai.

After years of voice training under the tutelage of various voice coaches, in 2006 Toumrai released her first album of Iranian love songs titled Under Your Spell.

While the lack of funds for doing extensive marketing and promotion prevented the album from reaching as many audiences as Toumrai hoped, the CD did open some doors for the up-and-coming artist.

“A producer from the CBC Radio program Fresh Air heard my CD in the CBC library and contacted me in 2007,” explains Toumrai. “I didn’t do the research but I think I’m the first Persian woman singer to have my music played on CBC radio,” adds Toumrai.

Toumrai received her second affirmation from Toronto media in 2008 when her CD was reviewed by WholeNote magazine; a publication dedicated to the promotion of live jazz, classical jazz and world music.

“They did a review in April 2008,” explains Toumrai, and adds, “the reviewer called me another fine example of what the world has to offer.”

In 2009 Toumrai got another opportunity to showcase her music in Toronto by being asked to perform at the Richard Bradshaw Amphitheatre at the Four Season Centre for the Arts.  Her music was categorized as world music.

She gloats “It was one hour of Persian music during their lunch hour music series and I believe I was the first Iranian to be there on that stage.”

In the past two years Toumrai has changed direction from Word Music to pursue her love of opera.

“Since 2009 I have been focussed on opera”.  She notes, “I auditioned two weeks ago at the Toronto Opera – I haven’t heard back but I’m optimistic.”

In addition to music Toumrai has dabbled in theatre.  She recently wrote and performed a one-woman show titled In Search of the Beloved.  The play is in English but includes songs in three languages including Farsi.

The workshop performance of the play was staged in the fall of 2010 at Canada Culture Days in Toronto.

Toumrai will be presenting another new piece titled under the Starlet Summer Nights of Tehran at Tirgan.  This work is based on a short story that she has written and will include the performance of two songs.

In speaking about her participation in Tirgan Toumrai states, “I think it’s a great festival – it’s high calibre – I’ve seen their festival in the past years and always wanted to be a part of it.”

Toumrai states, “I’m a local artist of Iranian origin and I felt I belonged in Tirgan, this year I felt I was ready.”

“My talents may not be totally Persian or totally Western – that’s where we are – we really don’t have a place – our art is a reflection of our experience in the past thirty years,” explains Toumrai of the generation of Iranian artists who have been living and working outside of Iran following the Islamic revolution.

Artists like Toumrai are a reminder that while we gush about finally being able to see Iranian artists who has travelled here from Europe or Asian at Tirgan, we should also take the opportunity to meet those rising talents right here in our own backyard.