Sima Sahar Zerehi – As the debate about voting against someone versus voting for someone continue to dominate mainstream electoral coverage, Joe Pantalone quietly makes headway with good news stories and Toronto loving rhetoric.

This week Pantalone once again sparked debate on the issues rather than the personalities by announcing his plans to start giving power back to the local level and hence roll back the clock on amalgamation.  This move would make Pantalone, the only candidate who is interested in diminishing his monopoly as mayor and sharing power. 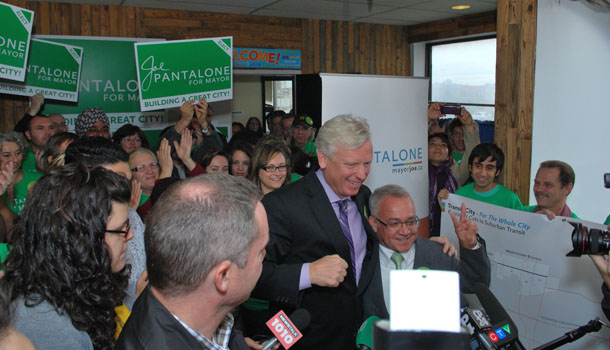 “Our system still hides some of the trauma of amalgamation imposed by the Mike Harris provincial government,” explained Pantalone. “My plan for Community Budgeting would ‘de-amalgamate’ certain parts of the City budget, and give communities power over spending. Cuts are not the only way to reduce bureaucracy.”

To really understand what Pantalone’s plan involves requires a quick look at the recent amalgamation of Toronto.

On January 1, 1998 the provincial government under Mike Harris dissolved seven municipalities comprising Metropolitan Toronto including East York, Etobicoke, North York, Scarborough, York, the regional municipality of Metro Toronto and the former city of Toronto and amalgamated them into a single municipality.  This move made the new City of Toronto the fifth largest municipality in North America, following Mexico City, New York City, Chicago and Los Angeles.

Like most measures imposed by Mike Harris on Ontario, amalgamation was widely contested in Toronto.  In fact, a municipal referendum in 1997 showed that Torontonians were overwhelmingly against amalgamation, with three quarters of voters rejecting the idea of a merger.  Prominent mayoral candidates in the 1997 municipal election campaigned against amalgamation including North York mayor Mel Lastman and Barbara Hall as well as former Toronto mayor John Sewell.

Regardless of the mass opposition, Harris imposed amalgamation on Toronto as a cost saving measure.  Amalgamation under the Conservative government did not only mean the creation of a mega-city but the drastic reduction of the municipal budget via provincial downloading. Ultimately, the new City of Toronto was mandated to take on additional responsibilities and costs resulting from a realignment of provincial and municipal services.

In the quest to meet the bottom line, the integrity of local neighbourhood oriented politics in the city were undermined and many Torontonians were further alienated from municipal politics.

Now, more than a decade after amalgamation, Pantalone speaks about turning back the clock and handing back power to more localized levels of government.

As such Community Councils could fund community priorities in specific departments, by directing money within existing budget envelopes.

The intention is to make Community Councils be responsible for engaging residents in a democratic and consultative community budgeting process.

Pantalone explains: “Contrasted with ‘Strong Mayor’ political systems in many other cities, Toronto Council is supreme. Strong local representation offers flexibility and accountability, checks and balances, and honours our ‘city of neighbourhoods.’”

Pantalone believes that by working with the elected Councillors on their Community Council, residents will have more influence over how money is spent on in their neighbourhoods.

In further explaining his vision for de-amalgamation Pantalone states: “While the former cities lost their separate status, they never lost their built form, social character, or community pride. Through this plan communities can make sure their local priorities are communicated and addressed – strengthening both their neighbourhoods and the whole city as well.”

According to Pantalone’s proposed plan at least a quarter of the general budget for the BIA capital program, Parks, Community centres and MLS investigations would be delegated to the local level.

To carry out this new strategy Pantalone proposed to appoint four new Deputy Mayors.  He explains,”I will appoint four Deputy Mayors, who will be responsible for the needs of the four Community Council districts, ensuring there is a strong responsive level of representation between the local view of Councillors and the city-wide view of the Mayor.”

Innovative thinking and a campaign dominated by ideas rather than attacks have allowed Pantalone to move steadily ahead in this race and now it seems that if elected this mayor would be willing to share the power and give municipal politics back to Toronto’s neighbourhoods.