Sima Sahar Zerehi – The Colour of Poverty Campaign – Colour of Change Network a province wide initiative that address the growing racialization of poverty and the increased levels of marginalization of racialized communities across Ontario, recently released a Racial Justice Report Card on the top candidates running to be Toronto’s next Mayor.

The report looked at the candidates’ platforms on employment equity, housing, public transit, data collection/analysis, community Services and equity issues as metrics for evaluating the candidates.

The advocacy group states that they issued the report card in order to highlight many of the issues that are of particular concern to members of racialized communities and to provide a way for voters to evaluate the mayoral candidates.

Avvy Go, Clinic Director of Metro Toronto Chinese & Southeast Asian Legal Clinic and group spokesperson states, “We release this Report Card to raise awareness around these pressing issues, while at the same time providing a tool for the voters to evaluate these candidates.”

Go added, “It is important for members of racialized communities in Toronto to elect the right person to be their mayor because of the particular difficulties they face including poverty, racial profiling and substandard housing, etc.”

The group believes that when it comes to the media coverage around the municipal election, the issues that affect people of colour have been neglected.

Professor Grace-Edward Galabuzi of Ryerson University, and Colour of Poverty (COP/C) Steering Committee member added, “So far, the media has focused on issues that affect only some Toronto residents, such as homeowners and business people. There has been close to zero coverage on issues that matter to equity seeking groups as well as to the majority of Torontonians.”

Galabuzi adds, “We need the media and the candidates to shift the focus of this election to what matters to the people who live in Toronto.”

The group issued their report card based on findings from individual meetings with the mayoral candidates between August to September 2010 as well as the candidates’ campaign platform.  While mayoral candidates George Smitherman, Joe Pantalone, and Rocco Rossi all met with the group, Rob Ford failed to respond to the group’s request for a meeting and was evaluated via his campaign platform and public statements. 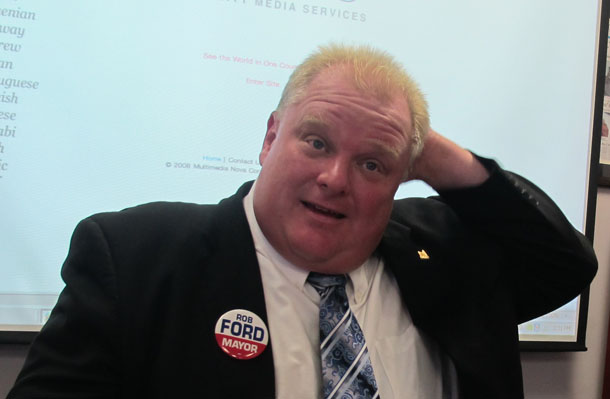 In the overall rankings George Smitherman received the highest mark with a B+, followed by Joe Pantalone with a B, and Rocco Rossi with a C+.  Rob Ford failed the racial justice report card with an F.

Debbie Douglas, Executive Director of the Ontario Council of Agencies Serving Immigrants believes that the report card also serves to hold the mayoral candidates accountable to their election promises.

She notes,  “By recording what the candidates have said on such issues as employment equity and strengthening diversity, we can also hold the new mayor accountable for his promises, no matter who gets elected at the end of the day.”

The group hopes that the report card will be used as an educational tool by voters and community groups on the issues in the lead-up to the October 25th election.