Sima Sahar Zerehi – “Whenever I pick up a new play, I’m always scared to death because I’m afraid it’s going to be a failure,” admits five time Dora award winner Soheil Parsa.It seems strange that a man who was short-listed twice for the Elinore and Lou Siminovitch Prize, the most prestigious award in Canadian theatre, would be so humble about his craft.

Artistic Director of Modern Times Stage Company, writer, choreographer and dramaturge Soheil Parsa is a rare creature in Tehranto, a successful artistic icon without any pretentions. 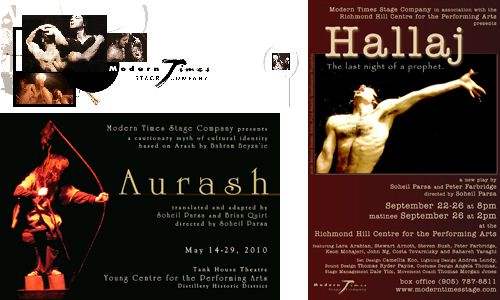 Parsa doesn’t play the role of tortured artist; neither is he the womanizing artists, or the misunderstood intellectual whose rarefied artistic visions keep him isolated from the general public.  In fact, he’s rather normal and even down to earth for a man whose work has made a distinct mark on the Canadian theatre scene.

The beginnings of Parsa’s story mimic a typical Tehranto migration tale.  Like many of his generation Parsa was in his last year of studies in Theatre Performance at the University of Tehran when the Islamic Revolution broke out.  As part of the Cultural Revolution in Iran, theatre studies were shut down and Parsa like many others felt that he had no choice but to smuggle his family and himself out of the country in 1982.

After journeying through Pakistan and India, Parsa, his wife and his young son finally arrive in Toronto, Canada in 1984.

At this point in the story most Tehranto narratives would talk about survival jobs and in some cases the launch of a small business such as a convenience store or perhaps embarking on a new carrier in real estate.

Past dreams of pursuing a profession in theatre would be relegated to daydreams, weekend community gatherings and perhaps small nostalgic Farsi language productions staged at the North York Library.

But, Parsa’s story is an exception to the rule.  He states, “I didn’t want to work in a 7/11 to survive.” He adds, “This was a very tough period in my life.  I had a family and financial and linguistic struggles.  I wanted to be in the right environment to learn English and pursue my dream.”

Parsa recounts, “although I barely spoke English in 1984 I wanted to enter the theatre program at York University, through perseverance I was able to convince the administration and the department to accept me as a student.”

“The theatre industry was very different at the time.  I was the first Middle Eastern student in the theatre department at York. I was considered a strange phenomenon,” explains Parsa.

Parsa speaks of the barriers that he faced in those years as a theatre student.  He states, “I appreciated the professors I had, some were very supportive, but I got a great deal of negative feedback as well. I was told that an artist from a Middle Eastern country, particularly a person from Iran, in the context of the anger and hatred against Iran during the post-revolutionary years, could not have an appreciation for the nuances in theatre.  The perception was that we were terrorists and fundamentalists with no understanding of the arts.  Again and again I was made to believe that there ‘s no room for an Iranian in the Canadian theatre world.”

Regardless of the warnings from the theatre establishment Parsa continued to pursue his dream.  He admits, “I believed in myself and my love for theatre pushed me forward.  Also, I got a lot of support amongst the students.”

Finally, in 1989 Parsa completed his Bachelor of Arts in Theatre Studies at York University.

He recounts, “In 1989, right after graduating I established Modern Times with Peter Farbridge who had also just graduated from York.  We were totally unknown and we started to create theatre with a minimal budget.”

Parsa explains, “Our first show, The Conquest, had a $300 budget. We staged it for the Toronto Fringe Festival.  It was a hot translation and adaptation of a film script by Bahram Beyza’ie.  This was the first Iranian play on a Canadian stage in a professional environment.”

The Conquest was a success at the Fringe Festival and launched Modern Times into the spotlight.

“From that point on we started creating one or two shows per year.  In 2011, we now have 30 productions in our portfolio.  Many have toured nationally and internationally as well.”

With Parsa and Farbridge at the helm the company has become a trailblazer in the Canadian theatre scene.

Since its inception Modern Times has received forty Dora Awards Nominations and ten awards.  Parsa has personally won three Dora Awards for Outstanding Direction and two for Outstanding New Play.  Parsa is also the only immigrant to have been short-listed twice, once in 2007 and once in 2010 for the Siminovitch Prize.

Parsa notes that part of his work included introducing Canadian audiences to the Iranian pieces.  He states, “out of the 30 productions we staged 8 of them have been translations or adaptations of Iranian plays.”

Besides The Conquest, Modern Times also produced Beyza’ie’s The Four Cases, The Eighth Journey of Sinbad, The Death of the King and Aurash.  In addition, Parsa has staged G.H. Sa’edi’s O Fool! O Fooled!, Abas Na’lbandian’s Stories from the Rains of Love and Death and Mohammad Rahmania’s Interrogation.

Parsa explains, “Stories from the Rains of Love and Death was a world premiere and only production of this play inside or outside of Iran.  The play was banned by the Islamic Republic for being so-called immoral.”

This play gave Parsa a 2004 Dora Awards for Best Direction.

Similarly, Parsa’s interpretation of Beyza’ie’s Aurash has been a tremendous hit for Modern Times.  Parsa notes, “Aurash has had a long life since 1998 when we first staged it at Theatre Passe Muraille.  The play, which is based on a famous Persian myth, has travelled all around the world. Since it was first adapted into English it has been translated to Spanish and produced in Havana, Cuba in 1999.  In 2002 we took the production to Tehran as part of the Fadjr International Theatre Festival.  Aurash has also been staged in Croatian in Bosnia-Herzegovina in 2009.”

In speaking about these productions Parsa states, “What excites me the most is that I was able to introduced the humanist aspects of Persian culture in a time when Iran was being depicted as a country of butchers.”

Parsa adds “Twenty years ago it would have been impossible to imagine staging an English language production with a title like Aurash or Hallaj and expecting them to be successful on a Canadian stage.”

“The reality is that these pieces have a resonance for broad audiences.  For example Hallaj is the story of a Sufi master equivalent to Joan of Arc,” explains Parsa.

Although Parsa has the distinction of staging the first professional Iranian play on a Canadian stage, and introducing the Canadian theatre world to a slew of Iranian playwrights and Persian flavoured productions such as Hallaj and The Daughters of Sheherzad, he did not limit his work to this realm.  Nor did he pigeonhole himself as a director focussed on ethnic or cultural productions.

“People have a hard time labelling me.  They tried to label me as the guy who does Persian theatre, but then they saw I was working on Beckett,” chuckles Parsa.

He states, “Modern Times didn’t only focus on Persian plays and pieces.  We staged Shakespeare, Chekhov, Ionesco and also Canadians like Guillermo Verdecchia, and Ahmed Ghazali.”

Parsa does acknowledge that his work often includes a distinctly Persian flavour.  He notes, “There’s always a flavour of my culture there.  It makes the production more profound.  For example, when I was reading Waiting for Godot, Khayyam was with me.”

He adds, “In the arts, we have to find some giants and stand on their shoulders.  My giants are Ferdowsi, Khayyam, Beyza’ie, Kiarostami, and Hafez.  I can’t describe how much they have nurtured and influenced my work and me.”

Despite his Persian influences, Parsa acknowledges that only small parts of his audience are from the Iranian community in Toronto.

“In reality Iranian-Canadians started to take me more seriously after I had made a name for myself in the mainstream theatre word.  It was important for the community to see the recognition that I got from outside, from the broader Canadian theatre community,” admits Parsa.

Although it has taken time for fellow Iranians to gravitate towards his work, Parsa has maintained a steady and growing popularity amongst broader audiences.

He explains how his unique style has kept the audiences interested in his work.  “I directed and reinterpreted Western pieces such as Macbeth or Waiting for Godot in a unique and original way with a different kind of interpretation. This has left a strong mark on the body of Canadian theatre.”

Speaking about his contributions to Canadian theatre Parsa explains, “My cast is always multinational.  I have been one of the pioneers in doing this and taking a risk by creating a show where a father and son are from two different races.  Yet my productions have managed to grow beyond this possible barrier and audiences have come to terms with the idea of multinational casts.”

He notes, “One of the secrets of my success in this country is that I believed in diversity and inclusiveness, I’m not only producing work for a specific community. I never alienated my Canadian audience.”

“If one day my audience consisted of one culture or one colour I would shut down my show and stop working in theatre,” asserts Parsa.

Parsa is not one to focus on identity politics.  He explains, “I’m interested in the political aspect of theatre but I don’t play politics.  I’m no stranger to the experience of racism; I have faced discrimination in Iran as someone from a Baha’i community as well as in Canada as an Iranian. In reality my experience with discrimination was even harsher in Iran. Racism and discrimination are not only the purview of White people; we have Chines people, Black people and Iranians who are discriminatory.”

For Parsa his work in theatre has always had strong links to social action.  Recently, his focus has been to return to the Iranian community and work on youth oriented projects.

Speaking about his recent staging of The Conference of the Birds a project conducted with Iranian youth between the ages of 11 to 30, Parsa states, “I think I have a commitment to my community, especially a commitment to youth.  Getting theatre training is very expensive in this city.  I don’t want one Soheil Parsa in Canada, my dream is to have many Soheil Parsa’s in different areas of the arts.”

Parsa boasts, “Since 2006, five of my students have gone to different theatre schools in Canada; to York, Humber, and George Brown.  I know that in five to six years we are going to have fantastic actors and directors from our community in professional theatre.”

While Parsa spends a great deal of his time on mentoring and training the next generation of actors, directors and playwrights he had not yet finished working on his own career.

He states, “I never ever stopped learning.  When I get any award it makes me crave new challenges.  I’m still researching, reading and traveling to learn new approaches.  I’m always re-evaluating my work.  For me every play is a new journey.”

Speaking about this production, Parsa explains, “Basically what is at the heart of this project are many why’s.   Why can some people offer an olive branch when others need an eye for an eye?”