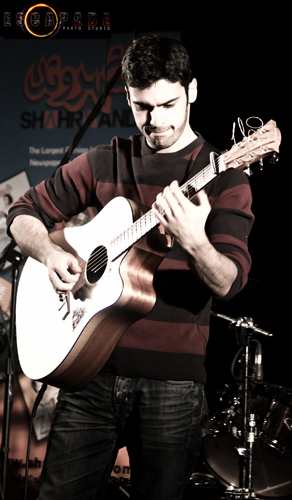 Well, they have all influenced the work of Maneli Jamal, an up-and-coming self-taught acoustic guitarist who has been making a name for himself in Toronto’s music scene.  Maneli is one of many young talents performing at a free show at Harbourfront’s bi-annual Tirgan Festival.

Maneli describes himself as “a solo acoustic guitarist who plays in a progressive way – that means taking some of the techniques that you wouldn’t normally use on a guitar and applying them to the acoustic guitar – such as percussive styles like slapping and tapping – putting it all in a blender and seeing what you get.”

As his divergent influences suggest, the key to Maneli’s style is experimentation.  However, despite his young age of 26, Maneli is not just an irreverent kid mindlessly toying with clashing sounds in order to produce gradations of anarchistic noise.  In fact, he’s a cerebral musician producing thoughtful, complex compositions that seamlessly weave together unexpected rhythms and harmonies.

Maneli’s deeply analytical approach to the acoustic guitar is evident in the considerate way he speaks about his influences, “classical music is the roots of most music that I listen to today – because of that it’s natural for me to go back, back, back, and see what my current influences were influenced by. Bach set new standards for classical music at the time, even today we’re listening to Bach, and his very complex composition, intertwining rhythms with other rhythms in one piece. This inspired me to go in the direction of having two or three things going on at once.”

Maneli effortlessly draws the line from Bach to Iron Maiden, “if you look at the musical quality of their songs not their high screeching vocals or their amazing solos, a lot of it is based on the classical scale revolutionized by Bach – they are metal and I started playing metal and punk when I first started to play the guitar, that was the roots of my influence for playing.  Even now when you listen to my music you can pick up some of the harmonies from Iron Maiden, they had three different guitars, so it got me thinking how can I do three different things with one guitar as opposed to three guitars.”

In speaking about Led Zeppelin, Maneli emphasizes the rock band’s ability to draw from various musical sources, he states “they weaved a lot of difference genres into their playing, they didn’t just play hard rock, they played some acoustic stuff, they even brought in some eastern flavours to their tuning as well –Jimmy Page the guitarist – used alternate tunings quite a bit – that’s something that I use frequently, for every one of my pieces I change the tuning of the guitar to accommodate the message.”

From the Canadian music scene, Maneli points to guitarist Don Ross as one of his main influences.  He explains, “he’s a monster on the guitar, he plays a similar style as me. I picked up a few of his tricks, his percussive stuff, his slapping on the guitar, he is a solo acoustic guitar player too, so when I was starting out he was a big role model because he made it seems like it is actually possible to play one guitar and make different sounds.”

Not all Maneli’s influences are based on Western music, he also draws from other musical traditions; “From Flamenco I’m pulling out the rhythm and modes used in their scales,” he explains and adds, “a lot of it is similar to Persian music and Arabic music because gypsies were travelling in all those areas and were picking up different things and eventually got their own sound – in a way I consider myself a nomad as well, picking up different influences during my travels.”

While Maneli’s roots are Iranian, he considers himself a citizen of the world. His history is similar to the story of many refugee families forced into exile.  Since he was a young child he has had to migrate from one country to the next in search of refuge.  For the first seventeen years of his life, Maneli and his family were constantly on the move, migrating from Iran, Russia, Germany, and the United States until they finally arrived in Toronto, Canada in 2003.

Maneli started teaching himself how to play the guitar ten years ago, a few years before a deportation order from the American government forced him and his family to seek refuge in Toronto.

“I didn’t play too much for the first few moves, but I did play music for the hardest move of my life from the States to Canada. This connection to my acoustic guitar that I had was so deep and so personal; if I didn’t have the guitar I would have gone to a mental institution. I needed the creative outlet. The guitar has really helped me develop my voice.”

Maneli explains that his last move from Austin to Toronto was the hardest because of his age.  He recounts, “I was a teenager – as soon as you’re taken out of your surroundings you get angry and rebel. I was 17 years old, I was trying to figure out who I was, my oldest brother had the hardest time moving from Germany to America.”

Now eight years later Maneli has made Canada his new home, “When I first came here I was an angry kid – it took me two to three years – I had to let go of the past – Canada right now is the best place for me and my family.”

Despite his studious approach to music Maneli is a self-taught artists with no formal training.  He explains that being self-taught has greatly influenced the evolution of his style, “one of the advantages is that you are forced to be creative in teaching yourself – I’m a visual player – I try to see what someone is doing and imitate them and it forces me to ask how do I do this?”

Maneli adds, “If I wasn’t self taught I wouldn’t be finding a way of fusing these various styles, I would probably be following the teachings of my instructors and modeling my work after their styles.”

“It may take me ten years longer to teach myself the things I want to learn – but when it takes that long you discover many new things that you wouldn’t discover otherwise,” explains Maneli.

While Maneli Jamal may be a new name for some, fans of acoustic guitar in Toronto have most likely come across his singular style.   Maneli has played over 200 shows including performing at some of Toronto’s music hot spots and festivals including the Junction Arts Festival, The Mod Club, the Rivoli, Free Times Café and most recently Hugh’s Room.

Maneli has also been awarded two first place prizes by Taylor Guitars and the UK’s Faith Guitars on their YouTube competitions.

Currently, he is working on his second full-length album with a new label; the CD titled The Lamaj is scheduled to be released in late 2011.  The title is an inversion of Maneli’s last name.

“The album is dedicated to my family’s journey coming to Canada,” notes Maneli. “My parents had to change their name every once in a while to hide their identity so the name Lamaj is a reference to that practice.”

Maneli’s first album The Ziur Movement (2009), as well as his demo (2006) are both available via iTunes and through his website at www.manelijamal.com.

However, Maneli cautions that his special brand of music is best appreciated when viewed live.

“Live is always a different setting regardless of the music being played – simply because you can see the artists doing what they are doing on stage. This is such a visual style. I’m using the guitar as my drum kit, as my base, as my keyboard, I’m using the guitar as any instrument that you can think of and trying to combine it all in one instrument. I might tap the guitar or I may do something that people are not used to seeing, I may slap the guitar on the back in a percussive style like a tomback to make a Persian drum, doing this my arms are flying all around and up and down – I think that’s what’s more exciting to see than playing in the regular position when everything is more disciplined.”

In speaking about participating in the Iranian arts festival Tirgan Maneli states, “I’ve never been to Iran – I’ve travelled all around the world, that has helped me shape my music – being of Iranian descent has helped me realize that there’s so much Iranian culture that needs to be preserved.”