Sima Sahar Zerehi – Stop me if you heard this one already, a young family with kids immigrates to Canada in search of a better life and future.  They choose Toronto as their new home and settle in an affordable residence in Scarborough.  The kids are young, so it doesn’t take them long to integrate with others in school, besides their classes and neighbourhood is filled with other new immigrants.

The parents work hard in starter-jobs in the service sector with hopes of owning a business and home one day, time passes by.

Although this story could be about any one of our families, and strikes as being a cliché, it is nevertheless a true story about Babak Nahiddi, the young Iranian lawyer running for City Councillor of Willowdale’s Ward 24.

You wouldn’t expect to hear this story recounted while sitting in the boardroom of a prestigious law firm on the thirty-first floor of an office tower on King Street.  These stories are told in ethnic food stores and family restaurants that smell of flavours from home.  In local beauty parlours that promise services such as threading or from the front seats of taxis driven by doctors and engineers. 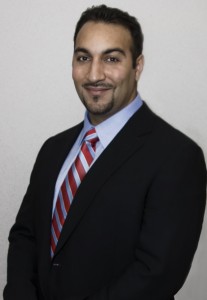 But this story is recounted in the boardroom of the Gardiner Roberts law firm overlooking Toronto’s financial district. Nahiddi speaks about his life, family, career and quest to embark into municipal politics. But we start with his name.

Babak also goes by Bob, another telltale sign of his hyphenated identity as an Iranian-Canadian.  “When I’m interacting with someone who is Persian I prefer to be known as Babak but for the sake of everyone else I go by Bob.  I’ve been Bob since I was in grade three, and it kind of stuck, it wasn’t really a conscious choice, but I didn’t really object to it because Bob is so similar to Babak anyway.”

Nahiddi is one of many young Iranians who have grown up in Toronto.  “I actually came to Canada when I was three,” he recounts. “My family and I immigrated to Canada on October 12, 1983.  I remember holding my mother’s hand as we walked through the Pierre Elliot Trudeau International Airport in Montreal. My parents knew neither English nor French. They had nothing but a few hundred dollars and a lot of hope and determination with which to build a new life in a foreign land.”

Nahiddi admits, “We literally had to build ourselves up from scratch.”   He adds, “that’s why I really appreciate the plight of immigrants and the plight of newcomers in society.  The beauty of this place is that it is possible for a person to come here with nothing and build yourself up.  Albeit it does take a long time and a lot of hard work.”

Nahiddi speaks with candor about his family’s early years in Canada and his parents’ early career as owners of a Pizza Pizza franchise in Scarborough.

He states, “my parents when they came here, started delivering pizzas in a pizza shop, then they saved up enough money to actually buy the pizza shop. Meanwhile, I would go to school at John A. Leslie Public School and after come directly to the pizza shop and joke around with the guys.  It was an amazing childhood, it was fun, there were always interesting people coming into the store.”

Despite the good childhood memories, Nahiddi also recalls his parents’ determination, tenacity and sacrifices. “I remember my father and my mother working late until three or four in the morning closing the shop.”

Nahiddi continues with his family story, “once we were able to build some more capital they purchased another franchise restaurant, this time we moved out of the realm of pizza shops, this restaurant was actually in the downtown core, it was a Michelle’s Baguette.”

Speaking of his family’s Michelle’s Baguette, he adds, “that was a very lucrative venture for us, they worked very hard and they actually recently sold that and now they own a camp ground in Prince Edward’s county.”

For Nahiddi involvement in the family business was a matter of course, “I have been intimately involved in all of the businesses, forcibly, because I had to,” he jokes, “on the other hand I really value family because I owe my parents everything, if it wasn’t for them I would be in Iran and my life would be totally different, I wouldn’t be running for City Councillor.”

Nahiddi and his family moved to Willowdale when he was a young teenager, Ward 24 is the place that he calls home.

The immigrant work ethic, embodied by his parents was something that inspired Nahiddi to strive for success throughout his life.

“By the age of eighteen I had won over a dozen medals in provincial karate tournaments and multiple medals at the Canadian National Black Belt Championships,” remembers Nahiddi.

Yet, despite his athletic success, Nahiddi shifts gears and continues on a road towards more traditional academic pursuits. He states, “I registered at the St. George Campus of the University of Toronto and four years later, obtained an Honours Degree with a specialization in political theory.  Subsequently I enrolled in the Faculty of Law at Queen’s University and I achieved a Juris Doctorate.”

After graduation from law school, Nahiddi snags a promising job at Gardiner Roberts where he is currently employed as a civil litigator with a focus on wrongful dismissals.

Sitting in a suit, flanked by a young Iranian articling student whom he is mentoring, Nahiddi speaks about his passion for law.

“I enjoy employment law because it really helps me appeal to the common man, it’s much different from say corporate law because employment law deals with an individual on a one on one basis.  If they are fired they call you and they need your help and you help them and it impacts their life immediately,” recounts Nahiddi.

Clearly despite his family’s success in business and his own success as a lawyer in a major law-firm, Nahiddi has not forgotten his humble roots.

“If you look at my client base you’ll see that I represent both employees and employers. It’s true that most of the employers I represent are corporations but on the other hand I also represent employees,” Nahiddi explains.

Nahiddi also calls attention to his legal writings, “if you take a look at my profile online you’ll see that I have written an article on Bill 168, which is the new legislation introduced on workplace violence and harassment.”

With a wry smile Nahiddi glances around the sleek boardroom and concludes, “So it may seem a little ironic to be speaking of the common folk while we’re in our ivory tower but I’m certainly not opposed to working with lower income people and the common man.”

Nahiddi is exactly the kind of up and coming young professional needed to put the Iranian community on the political map.  His story is a story of the successes and achievements of an immigrant community striving to establish long-lasting roots in our adopted home.  With a new generation of educated and articulated leaders like Nahiddi, the Iranian-Canadian community in Toronto is well on its way to becoming a political force to be reckoned with.

As I take the surprisingly short trip back down the elevator of 40 King Street West, I can’t help but think “we’ve come a long way baby!”