Sima Sahar Zerehi – It’s the age of the geek – the eggheads, the nerds; the pocket-protector crowds have officially taken over, no longer confined to their labs, and imprisoned behind their computer screens.  Being a geek is now chic.

But the geek revolution is not just about the comeback of dark-rimmed glasses – it’s about a new world order that places science and technology at the epicenter of our socio-economic and political life. 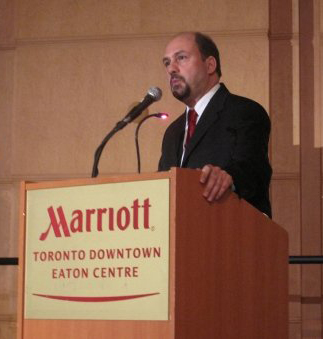 The scientists are no longer content to invent the tools and machinery that helps us improve our lives – they want to be part of the discussion about the impact of their work on our economic and political future.

In Canada the mother ship for the scientists who want to have a voice in the development of this country’s science policy is the annual Canadian Science Policy Conference.

Iranian-Canadian Mehrdad Hariri is at the helm of the initiative as the conference Chair.  Hariri, an active community leader and human rights organizer is exactly the kind of person who could make science politically relevant.

Hariri admits, “The Canadian Science Policy Conference or CSPC was my own idea. I initiated this effort due to a few reasons; first I felt that in Canada there are not sufficient channels of systematic linkages and communications, across various sectors, academia, government, private sector and non-profit,” explains Hariri.

He adds, “in addition, I believed that Canada deserves to have an annual forum on science technology and innovation policy, a forum that is inclusive, national, multi-sector and multi-disciplinary. Finally, the science policy community needs to be heard more and brought to the mainstream.”

Hariri recounts how he initiated the conference; “I rolled up my sleeves and formed an organizing committee from colleagues and developed a strategic plan and created an advisory committee from experts in science policy from across the country. We organized a fundraising campaign, which was very successful, and finally the first conference took place in 2009 with enormous success. More than 400 participants, 60 speakers, 13 panels, and for the first time a forum on science policy innovation at such level and scale happened in Canada.”

Since it’s inception the CSPC has come a long way.  Hariri states, “The conference generated enormous enthusiasm, hope and energy, mainly because it was initiated at a grassroots level; young scientists and policy makers, graduate students and postdocs – the community gained an unprecedented level of confidence. So the conference has empowered the community.”

Hariri notes that the CSPC has also inspired other similar efforts in the sector, “as a result we have witnessed several other initiations and some have been very successful. Also, our organizing team has become the machinery to enable a young generation of scientists to become familiar with science policy and find the relevance of their research within society and among policy makers.”

One of the consequences of the conference has been to raise the profile of the science policy community according to Hariri; “Science policy issues and some of our panels have been covered by various media outlets. Even Nature magazine in its editorial page referred to CSPC as a sign of hope for the Canadian science policy landscape.”

Above all, the conference has been able to open lines of dialogue between policy makers and the science community.  Hariri points out the significance of these discussions, “the CSPC has been able to stimulate discussions and generated a lot of content on pressing issues of science and innovation policy, some of which are being discussed for the first time in Canada.”

One important issue that Hariri has done a great deal of work on personally has been connecting the fields of science and diplomacy.  Hariri explains, “the emerging field of science diplomacy was discussed for the first time in Canada at our conference through the participation of former science advisor to the Secretary of State, Hillary Clinton.”

According to Hariri gaining a grasp of science policy is crucial to securing a stable economic future for Canada.  He notes, “if Canada wants to keep the same level of living standards in a very competitive world, it must shift its gears from relying on natural resources to innovation and a true knowledge based economy.”

Hariri warns that other countries have already made significant investments in the area of science and technology. “In today’s global economy there are emerging powers such as China, Brazil, Singapore and South Korea, which are capturing the global markets more and more and transforming into giant powerhouses for research and development.”

He adds, “Canada lags behind in innovation and building a knowledge based economy. The first step is building proper infrastructures for science and innovation policy that is the necessary foundation for progress in that direction. Innovation will not happen by just a mixture of research and capital. It requires fresh dynamic ecosystems in which various sectors of science, enterprise, government, private sector, academia, and non-profit, are connected and collaborate.”

Bringing in new ideas and bright new minds is a central concern for Hariri and his colleagues.  Hariri notes, “We need a foundation to get the best and the brightest of the younger generation to get involved in setting policies and bringing fresh ideas into practice. Our conference is contributing to this cause. We have become the main source for establishing a cross-sectoral dialogue and youth engagement. We have established better connections and fostered collaborations and in general built a foundation for innovation, which will be integral to a wealthy economy.”

The third annual CSPC will be held in Ottawa from November 16-18, 2011. “This year’s conference is going to be the biggest one;” boasts Hariri, “with 17 panel sessions, a full day workshop on science policy 101, and almost 90 speakers including more than 45 CEOs, Presidents and Executive Directors, leaders of industry, government and academia.”

Connecting the science community to the political arena has been one of the CSPC’s trademarks.  Hariri explains, “We have two keynote sessions one of which is titled ‘Science and Politics in Canada,’ and for the first time this topic is being discussed at a national conference. Four former scientists and current politicians including our own Richmond Hill MPP, Reza Moridi will discuss the challenges and solutions for better communication channels between the scientific and political communities and how to encourage more active participation from scientists in the political arena. This session will be broadcast by CPAC on TV.”

While Hariri is proud of the high profile speakers at the conference he points out that one of the major accomplishments of CSPC has been its ability to attract young people.  He states, “Significantly, almost 20% of our participants are students and post docs, and CSPC is the only venue in which these high caliber individuals and emerging minds from the younger generation can discuss the issues of science policy in one place.”

While CSPC has come a long way during its three short years, Hariri and his team have even loftier goals for the future.

“We hope to expand our activities beyond the conference,” admits Hariri. “It has been one of the conference objectives to lay down the foundation for the establishment of a centre for science policy in Canada. The centre will be a hub for the science policy community; and link the pool of expertise and talents of the community, host discussion forums on emerging issues of importance in the Canadian science policy landscape and establish ties with similar organizations internationally to benchmark the good practices from other nations.”

A commitment to training young leaders continues to be a priority in the future of the CSPC.  Hariri states, “the centre will also initiate, develop and foster effort for training young scientists to become the leaders of science policy in Canada.”

A proposal for the development of such a centre is currently being finalized by Hariri and his team, the aim is to present the plan for this project at the conference in Ottawa.