Sima Sahar Zerehi – Mine’s in the far back corner of the closet, tucked behind a box containing hardly-used items like a sleeping bag and extra linens for guests, protected by a heavy-duty garment bag – the kind you get when you buy an expensive winter coat from the department store. 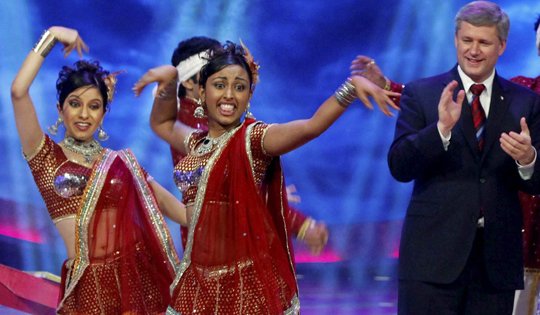 It’s emerald green, silk chiffon, fabric thin and delicate like tissue paper, colour brilliant like a gemstone.  It has been embroidered by hand with intricate designs in gold thread, particularly around the hems and the edges of the three-quarter length sleeves.

It smells like the warm sundrenched desert that remains tucked away in a special vault in the recesses of my memory – the homeland of my childhood.  It belonged to my paternal grandmother, a woman whose image plays back in my minds eye – as dated reels from a super eight camera, a woman who I can now see mirrored in the long lines that frame my sister’s face.

This garment, left to me on my grandmother’s death-bed from a small village by the Gulf of Oman, is the only physical link I have in this part of the world to a woman I only remember from the bygone days of early childhood.

To reach me in Toronto, this dress travelled from hand to hand, from family to friends to acquaintances, from Iran to the United Arab Emirates, to finally fall onto my trembling hands in Tehranto.

This green bejewelled garment is my ethnic garb, the uniform of women frail as reeds but tough as nails, women who fought for their right to wear their traditional costumes even in the face of religious oppression in Iran, and won.

Last week in preparation for an event at 655 Dixon Road in Toronto, Mr. Harper’s event planners, released a call-out in search of people in “ethnic costume” to sit in the front row, in order to generate a “great photo op”.

Ironically, the invitation was circulated to the Colour of Poverty network as well as the Canadian Arab Federation, an organization defunded by the Harper administration.

Mr. Harper and his team want us to parade our ethnic garbs in order to garner the ethnic vote, they want to display us turban on head, sari in hand, in front of the well orchestrated media machine.  They want to prove that you don’t have to have progressive immigration policies, funding for settlement services, or a blueprint to address the needs of newcomers to be able to whip-up the ethnic vote.

Mr. Harper wants to show that he can control the 905 with empty promises; he thinks that shaking hands with the gatekeepers in our communities and sprinkling funds into handpicked partisan projects will secure him a majority in the House of Commons.

Dear federal leaders, I won’t wear my grandmother’s ethnic garb for your photo ops when your immigration programs prevent my friends from being reunited with their grandparents. I won’t smile rice-bowl-in-hand, when my friends can’t get their medical and engineering degrees accredited; I won’t pose shaking hands in agreement when you cut funding to essential settlement services helping my neighbours find housing, jobs and a pathway to citizenship.

My ethnic garb is too precious to play dress-up with in your superficial campaign and my ethnic vote is reserved for a party that reflects my concerns and addresses my needs.