In addition to Canada, the US and Britain also issued statements regarding tougher sanctions against Iran while both China and Russia declared their opposition to these measures. 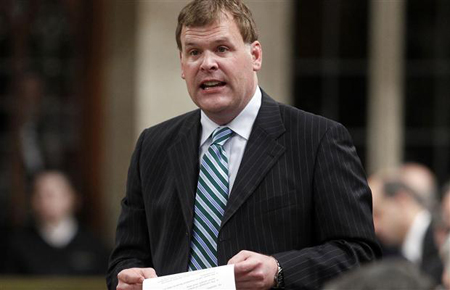 Since 2006, the United Nations Security Council has imposed four rounds of sanctions against Iran in response to its nuclear program. These resolutions require Iran to fully cooperate with the IAEA and to suspend all uranium enrichment-related and reprocessing activities.

In a statement issued on November 21, Foreign Affairs Minister John Baird announced “Canada will continue to work with the growing list of like-minded countries in a bid to limit the ability of Iran’s rulers to further undermine peace, prosperity and stability.”

Baird expressed that “Canada is deeply disturbed by the information contained in the most recent International Atomic Energy Agency report on the state of Iran’s nuclear program.”

He noted that these actions were “yet more proof that the current regime in Tehran poses the most significant threats to global peace and security today.”

“We are compelled to take further action as a result.”

According to Baird the new sanctions under the Special Economic Measures Act (SEMA) will be even tougher.

“These expanded sanctions prohibit almost all financial transactions with the Iranian government, add individuals and entities to the list of designated persons and expand the list of prohibited goods.”

As part of the new measures the Canadian government has lengthened the list of prohibited goods to include all goods used in the petrochemical, oil and gas industry in Iran as well as additional items that could be used in Iran’s nuclear program.

In addition, the expanded sanctions entail the addition of new individuals and entities to the list of designated persons. On October 18 Canada imposed sanctions on five Iranian individuals. Four of them are members of the Islamic Revolutionary Guard Corps-Qods Force. These individuals brought the total of those targeted by Canada’s sanctions to 279 entities and 47 individuals.

While the sanctions prohibit financial transactions with Iran, including transactions with the Central Bank of Iran, the government stresses that Canadians with relatives living in Iran will still be able to send funds to family members, provided those relatives are not listed individuals.

Baird explains  “We are taking aggressive action to cover the known leadership of the Iranian Revolutionary Guard and block virtually all transactions with Iran, including those with the Central Bank, while providing an exemption allowing Iranian-Canadians to send some money to loved ones back in their home country.”

It should be noted that the new prohibitions on financial transactions and goods used in the petrochemical, oil and gas industry in Iran do not apply to contracts entered into prior to November 22, 2011.

It is important to note that while the sanctions are targeting Iran’s nuclear activities, Baird also made reference to the Iranian regime’s human rights record.

He stated, “Iran’s current leaders blatantly ignore their international obligations. They obfuscate Iran’s nuclear activities and they block any international attempt to verify the country’s claims. They do so while continuing to violate the human rights of their own citizens, all while undermining regional security.”

Since 2003 Canada has been the lead co-sponsor of the annual resolution at the UN General Assembly on the situation of human rights in Iran.

Forty one other UN members and states co-sponsored the 2010 resolution and 80 others supported it, an unprecedented show of support speaking to the international community’s growing concern for the human rights situation in Iran.

In July 2010, Canada implemented a series of sanctions against Iran under SEMA. These sanctions prohibited the exporting of arms and related materials that could contribute to Iran’s proliferation activities, and items used in refining oil and gas, including technical data related to these goods.

The 2010 sanctions were also designed to curtain financial relations with Iran. They prohibited making any new investment in the Iranian oil and gas sector, or providing or acquiring financial services for this purpose.  The measures also banned the provision and acquisition of financial services to allow an Iranian financial institution (or a branch, subsidiary or office) to be established in Canada, or vice versa.

The Canadian government also prohibited the establishment of correspondent banking relationships with Iranian financial institutions, or purchasing any debt from the government of Iran.

In speaking to this announcement earlier this week at the House of Commons, Peter Van Loan, Government House Leader stated, “The regime in Iran poses a significant threat to regional and global peace.  We will do what it takes to isolate the regime and to minimize the risk that it poses to global peace.”

While these sanctions go further than any previous measures to economically isolate the Iranian regime, many countries including the UK continue to import Iranian oil.

To address this double standard France has called for new sanctions on an “unprecedented scale,” proposing a halt on purchases of Iranian oil and the freezing of Iranian Central Bank assets.