I was an emotional wreck, it was International Women’s Day in a year of revolutions and the women of the Middle East had received a kick-in the butt instead of the pat on the shoulders we so richly deserved.

I hemmed and hawed about ending my day at a one-woman play about an Iranian-Canadian perspective on the fraudulent Iranian elections of 2009.  Come on, I already knew the ending to that story and it wasn’t going to do anything to change my doom and gloom.

On the other hand I had heard the buzz about Mahmoud on stage at Tarragon’s Extra Space since March 4th.  People from all over were raving about Tara Grammy, the twenty-nothing-year-old performer and writer, already being heralded as someone to watch in Toronto’s theatre scene.

Ultimately a mixture of curiosity and obligation took me to the play.  I mean we should support the work of young female artists from our community, right? 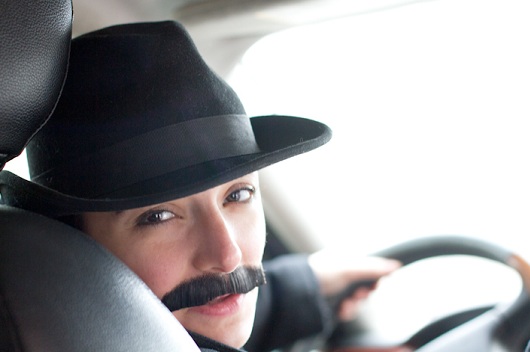 Mahmoud is a play about three seemingly disparate characters, an Iranian Engineer turned Toronto-cab driver, a young Iranian-Canadian teenager with body-hair issues, and a fabulous Spaniard who is dating a closeted Iranian man.

The play is produced by Pandemic Theatre; a new Toronto-based collective focussed on productions that offer personal perspectives on topical political issues.

The company was formed in November 2009, their previous works include My Gaza ‘Tis of Thee, dealing with the Israeli-Palestine conflict, Imbalance, about a family shattered by mental illness and Guantanamo Hotels & Resorts a satirical play about the conversion of the notorious detention centre into a holiday destination.

Even with a quick glance at these past titles you can see that this group doesn’t shy away from controversy.

Mahmoud, like their previous productions, in a cutting satire about the Iranian-Canadian community.  Obviously, there is nothing sacred for this crew, from Hafez our beloved poet to Ghorme-Sabzi our favourite dish; they mercilessly poke fun of us all.

With Mahmoud, we have been outed, warts and all, and to think this is done by one of our own!   Is there no respect for the time-honoured code, “What Happens in Tehranto, Stays in Tehranto?”

Don’t get me wrong this play is not just ethnic jokes and empty laughs, Mahmoud is a refreshingly honest and personal take on how a young generation of Iranian-Canadians experience the uprising in our native homeland.  This is life and politics as only a twenty year old can tell it, unabashed and irreverent, free of dogma and indoctrination.

So stop reading my rants and raves and go get a ticket already.  There’s only a few days left, the last performance is on March 13.  Just do it, because after all we could all use a laugh and a closer look at ourselves from the vantage point of the future generation.