Sima Sahar Zerehi – Documenting doesn’t always come naturally to us; we’re more of a handshake-to-seal-the-deal community. Oftentimes our recent history is told as stories whispered between friends in the wee hours of the night, hidden like shameful secrets too sordid to be told in the light of day, mitigated by long drawn out silences and puffs of smoke.

Sure, our parents’ and grandparents’ generations are famous for telling tall tales about the greatness of the Persian Empire and the achievements of Iranians in the arts and sciences.  We know names like Ferdowsi and Khayyam before most kids learn their ABC’s in Canada.  But when it comes to our recent history we’re predominantly left in the dark. 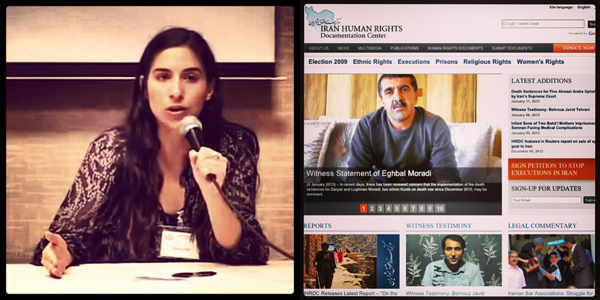 I know, most of us are familiar with the broad strokes: the Shah who was selling off Iran’s natural resources, like items in a fire sale to the West was defeated in a revolution spearheaded by coalitions of various groups. In a vacuum of leadership amongst the left the clerics led by the exiled Khomeini took over power and we got what we have today, Ahmadinejad and Khamenei, sanctions and an honorary position in the ‘access of evil’.

But what we never hear discussed around the dinner table are the specifics, what happened that solidified the power of the clerics in Iran?  How were all those young idealistic activists silenced into submission? What prevented our parents and grandparents from standing up and opposing the Islamic regime’s takeover of Iran? Those stories were always too horrible to tell, the wounds were too fresh.  So, we bit our tongues and never pressed for the details.

Today, when everything about Iran is en vogue, and even Hollywood is cashing-in on our past with films like Argo, the knowledge of our own history takes greater precedence.  Finally after more than three decades, we’re asking the hard questions and uncovering the stories seldom told and rarely documented.

The Iran Human Rights Documentation Centre is one organization that strives to answer some of these questions by providing the most basic building blocks for understanding history, the simple facts.

The IHRDC was founded in 2004 by a group of human rights scholars and lawyers, including McGill law professor Payam Akhavan. The mission of the Center is to “Establish a comprehensive and objective historical record of the human rights situation in Iran, and on the basis of this record, establish responsibility for patterns of human rights abuses.”

IHRDC also makes the records of these human rights abuses available to the public for research and educational purposes.

In the aftermath of the 2009 protests in Iran, a new interest emerged in uncovering the details of our recent history.  The generation of children born after the revolution are now keenly interested in learning the details of the past.

Gissou Nia the Executive Director of IHRDC explains how the events of 2009 in Iran changed her career focus and attracted her to the work of the documentation centre.

Nia, a rights lawyer by trade, is no stranger to working on high profile human rights cases.  Prior to joining the IHRDC she worked on war crimes trials at the International Criminal Tribunal for the former Yugoslavia (ICTY) where she represented former government ministers from Bosnia and Kosovo.

She explains how the events in 2009 compelled her to change her career focus. “I was at the Hague in 2009, I had voted at the embassy, and in the early morning in Amsterdam we started getting reports that Ahmadinejad had won, protests snowballed, and I was spending more and more time on things related to Iran.”

Nia recounts how the events in Iran had consumed her, “I was in the court room scrolling Twitter feeds, and then I realized that what I wanted to do was take what I was doing in the Hague in that framework of justice and accountability and bring it into the Iran context. That’s how I got interested in doing work with IHRDC full time.”

Nia adds, “During this time I was looking to see how I could best add value to document what was happening.  I was doing my homework on different groups and trying to figure out how my experiences would best match with the work of these organizations. The group that I found most closely fit with the things that I was working on before was IHRDC.”

Through her work at the Hague, Nia had connected with Payam Akhavan one of the groups founders and she shared his vision for the need for documentation.

“That documentation model is needed when you are looking to prosecute different individuals for mass crimes or to promote awareness about responsibility and this group is doing that. There are other groups that are doing this work as well, but IHRDCs model was most attractive to me so I came here,” explains Nia.

Speaking about the work of the IHRDC, Nia states, “The group was founded with the idea of building a very comprehensive record of human rights abuses over the past few decades and looking to Iranian state responsibility in that.”

“The idea of naming and shaming different officials and other alleged perpetrators is something that has caught on particularly in recent years with the rise of international criminal courts and looking for certain people to be brought to justice for those actions.  That was the model that IHRDC was founded on,” explains Nia.

While the original mandate of IHRDC remains relevant today, the context in which the organization operates has radically changed in the past few years.

“A lot of things have changed in Iran since 2004,” notes Nia, “the leadership has changed, the freedom with which civil society can conduct itself, a lot has also changed in the way we disseminate information. In 2004 you couldn’t get real-time instant information about abuses in the manner that we get now with Syria for example.”

Nia explains that while accessing information may have become easier, there is still a need for in depth documentation.  “The core part of the programming at IHRDC is to put out full length reports that are about 50-75 pages in both English and Persian that are thematic based on documenting human rights abuses against different individuals and groups or on particular issues.  For example the reports that we have put out in recent years have focused on ethnic minorities and religious minorities.  One of the last reports that we put out was documenting the Iranian state’s human rights abuses against the Kurdish minority in Iran.”

“The way that we compile research is primarily through first person witness interviews,” states Nia, “This isn’t something where we just go online and aggregate different public source information, we actually go to the root of what’s happening, we conduct field investigations.  We cannot physically go into Iran for obvious reasons, but we go to Turkey, Iraqi Kurdestan, Europe and go interview witnesses face to face about the abuses that they experienced in Iran.

“Those interviews can last 1-3 hours on the average,” recounts Nia, “I recall one interview that I conducted that lasted 18 hours.  All that witness testimony is taken in conjunction with public source information like court judgments and newspaper reports, we put it all together and produce these reports that establish legal and factual findings on who bears the responsibility for these abuses, what manner of abuses were conducted and so on and so forth.”

She adds, “We have concrete evidence that in certain cases drugs were planted on minority activists, like Kurdish and Arab activists in their homes and that drug charges were used as a pretext to arrest them, but for the most part we haven’t found that most executions for drug related offences are necessarily a pretext for political or human rights activism.”

“What is certain is that these are not fair trials and so there’s no way to say for certain what these individuals actually did. Did they even traffic drugs? Iranian anti-narcotics law punishes possession and trafficking the same way.  There’s mandatory death sentencing that is applied in cases of possession as well.  This is an area where reforms are needed but because Iran receives such a huge chunk of money from the United Nations Office on Drugs and Crime they feel like they have a mandate from the international community to carry out these executions.  Countries in Europe and North America’s primary goal is to ensure that these drugs don’t make it across the borders from Iran and Afghanistan into their territory,” explains Nia.

According to Nia another area of work that the IHRDC is engaged in is the threat to the independence of the legal profession in Iran.  IHRDC has put out some legal commentaries on this issue and is working on a full-length report to be published in the fall of 2013.

Nia points to Nasrin Sotoudeh one of the most recognized political figures in prison as an example of a lawyer languishing in jail for her defense of politically sensitive clients.  She notes, “Nasrin is not the only one.  This is an important issue for us, we’re on a really problematic path in Iran when not only people are the people accused of political or subversive activities put in jail but the people who defend them on those charges are also being put in jail.”

In March 2013 IHRDC is publishing a report on the abuses against the Ahwazi Arab population in Iran.  Nia notes that the report will be based on 50-60 first hand interviews.

The reports compiled by the IHRDC have already been widely used by the UN, in various immigration courts, as well as for academic reasons by writers, journalists and researchers.

Recently much of the documents compiled by the IHRDC were used by the Iran Tribunal in their hearing on the 1988 massacres in Iran.  Nia took part in the Tribunal as a prosecutor.

She states, “A lot of the witnesses who gave testimony at the Tribunal were witnesses previously interviewed by IHRDC.”

Nia comments that her hope is that one day the work of IHRDC will be used as part of a judicial process before a commission of inquiry in a free Iran.

Although she admits that the work is oftentimes thankless and tedious requiring hours of transcribing, translating and verifying each interview, she also recognizes its importance.  “I see our work as foundational. Those who want to pursue aggressive advocacy campaigns can look to our documents as a foundational piece.”

She adds, “We need the foundational documents before the witnesses die or before they forget the details because of the onset of age.  This all needs to be memorialized.”

For the work of IHRDC to continue, Nia and her colleagues will need greater public support and awareness.

“One aim of why I’m visiting more cities and coming to Toronto is to get more people more familiar with what we do,” states Nia.

By familiarizing people with the work of IHRDC Nia hopes to enlist more time, energy and resources for the organization.  She admits that IHRDC needs the efforts of many more volunteers to assist in their work as well as financial support from more individual donors to fund their initiatives.

Or on Saturday January 26 at the University of Toronto http://www.cilsc.com./

Placing Her Flag in the Sand: An Interview with Kathleen Wynne