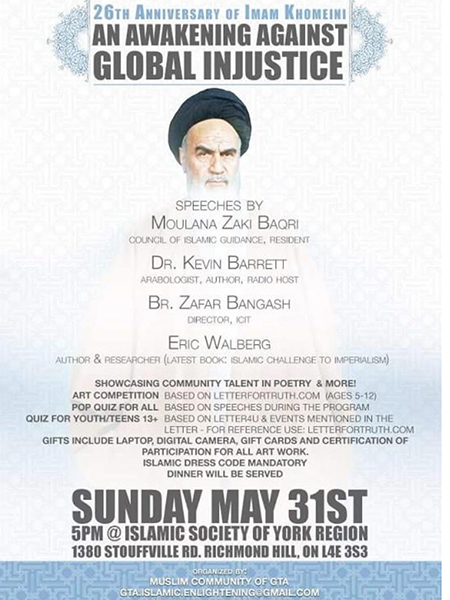 The Honourable Thomas Mulcair, the Leader of NDP, the Official Opposition

Justin Trudeau, The leader of the Liberal Party

Elizabeth May, The leader of the Green Party of Canada

To the Honourable Minister Blaney, Minister of Public Safety Canada

We, the undersigned, are a group of responsible members of Canada’s sizeable Iranian-Canadian community. We are writing to express our outrage and revulsion with the Islamic Society of York Region’s decision to hold a celebration on May 31, 2015 in honour of Ayatollah Khomeini.

Ayatollah Khomeini’s heinous historical record is well known. As documented by countless United Nations condemnations, Amnesty International reports and many other independent investigations, he was responsible for the execution, torture, disappearance, rape, and imprisonment of tens of thousands of Iranians– whose only crime was the peaceful exercise of their political and religious rights. Ayatollah Khomeini, then the supreme leader of Iran, was directly responsible for numerous violent acts including:

The execution of thousands of political prisoners in the summer of 1988. Canada’s Parliament courageously adopted a unanimous consent motion recognizing the massacre of political prisoners in Iran in 1988 as crimes against humanity under international law. Canada as such became the first country in the world to officially recognize these crimes.
The systematic torture, imprisonment and execution of thousands of political dissidents throughout the 1980s. In 1985, Iran became “the fourth country ever in the history of the United Nations” to be placed on the agenda of the General Assembly because of “the severity and the extent of this human rights record.”

Furthermore, Ayatollah Khomeini was directly responsible for the implementation of policies which can easily be categorized as religious and gender apartheid. In its judgment –at the end of a three-day session in The Hague in 2012– the Iran Tribunal found that the Islamic regime had committed “gross human rights abuses” including torture, sexual violence, extra-judicial executions and unjust imprisonment throughout its existence.

On the international stage, Ayatollah Khomeini was responsible for numerous assassinations of Iranian activists on foreign soil. In addition, he issued the “Death Fatwa” against Salman Rushdie, the author of The Satanic Verses.

In numerous speeches addressed to the people, Ayatollah Khomeini declared all who opposed or criticized the Islamic government “Enemies of God” and assured their elimination. As Iranian-Canadian citizens–many of us whom witnessed and experienced first-hand these atrocities–we request a strong condemnation of the Islamic Society of York, whom have the audacity to organize this event.

In the past, the government of Canada has shown leadership in condemning the Islamic republic of Iran and other nations for their flagrant violations of human rights. This is a historic moment for Canada, with its long peace-loving tradition, to seize this opportunity to refuse to endorse any form of celebration that glorifies the founder of the Islamic Regime. Any such event would be an insult to humanity and the families of the victims.