Sima Sahar Zerehi – Twenty years ago the Iranian community was a very different entity in Toronto.  We only had one or two Iranian restaurants, few family doctors and dentists who catered to Farsi speaking clients, a single pastry shop that offered nostalgic sweets from home and a grocery store that stocked what passed for Iranian bread, cheese, rice and dry goods.

So not surprisingly, most Iranian-Canadians in Toronto would have laughed if you told them we wanted to elect a member of our community to the Ontario Legislature.

Back then it was easy to know everyone who was active in our community.  We had a handful of social workers, artists, developers, real-estate agents and academics that were engaged in community building efforts. As the community was small and very insulated everyone knew these leaders and the projects that they were undertaking. 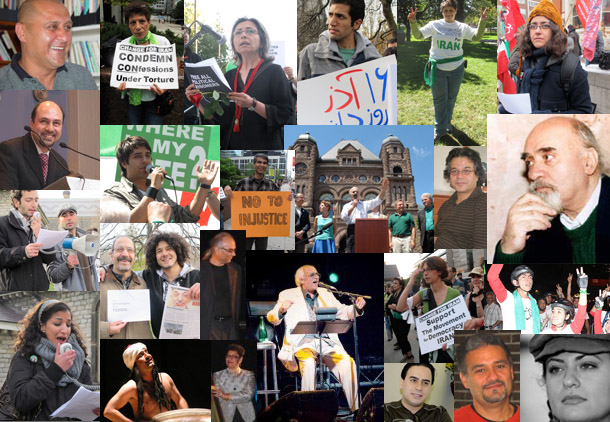 For our part Shahrvand was in its early years, and every issue published felt like a miracle.  I remember how many Friday evenings I would accompany my father to do his weekly newspaper delivery – at that time he derived so much enthusiasm from interacting with his readers that he chose to make certain deliveries himself.

When we would arrive at Yonge just south of Finch there would be a line-up of eager community members awaiting the weekly publication, people would rush to get their copy of Shahrvand and immediately flip through the pages.  Within a few minutes, full-fledged debates over the articles would ensue and the street corner by the grocery store would become a makeshift town hall.

It was very clear from these early days that Shahrvand was somehow more than the sum of its parts. The name Shahrvand means city-dweller or citizen – as such Shahrvand was always intended to be a democratic and community-oriented space where Iranians across the world could air their views and share their work.

As Shahrvand’s editorial team, we continue to strongly believe that this publication does not belong exclusively to us but that it also belongs to all Iranians who read it and write in it.  Shahrvand and the Iranian community in Canada have grown-up together and they belong to each other.

Today, the Iranian community has expanded exponentially; it is no longer the insulated little village run by a dozen or so active leaders in a handful of organizations, businesses and media outlets.

As research has shown, we now have an extremely young and educated population.  Youth, particularly youth who have been exposed to conditions of political repression, are always a force of change and dynamism.

As such, Iranian-Canadians in Toronto are an extremely vibrant community, very eager to become engaged in all aspects of life in their adopted home.

Our community has also become self-reflective, we are acutely aware of our hybrid identity as both Canadians and Iranians.  This reality is clearly expressed in the title that we have adopted for our community, Tehranto.

Tehranto, is not only a geographic entity spanning north on Yonge from Sheppard to Elgin Mills adorned with shops, restaurants and supermarkets brandishing Farsi language signs and offering familiar tastes of a far-away home.

Tehranto is also an intellectual, political, social and artistic space taken up by Iranian-Canadians living across the GTA.

Iranian-Canadians who through their academic, political or artistic endeavors introduce other Canadians to the Iranian community are Tehranto’s ambassadors.

Members of our community are always engaged in a blur of activity, mounting art shows, plays, protests, conferences and numerous activities that offer an opportunity for those away from friends and family to quickly build new social-ties.

Undoubtedly, these accomplishments are changing the face, feel and sound of Toronto and adding a distinctly Iranian flavour to the GTA.

When Arta Gallery brings Iranian artists to the Distillery District and exposes the look of Iranian art to Canadian art-lovers, Tehranto enters the confines of the Canadian art world.

When young Iranian students at the University of Toronto organize protests in front of Hart House in support of imprisoned students in Iran, Tehranto enters the political arena in Canada; and when Iranian entrepreneurs adorn the skyline of the GTA with their developments, Tehranto enters the Canadian business world.

Throughout the GTA the growing population of Iranians are actively taking on roles in various social, political, artistic, economic and academic undertakings. Young Iranians are making strides as lawyers, engineers, doctors, scientists, architects, professors and artists.

This is the real Tehranto, the accomplishments of these individuals who bridge the expanse from Iran to Canada.

In the next few months, Shahrvand will engage in an urban geography project that will attempt to map the confines of Tehranto.  We will be publishing interviews, profiles, editorials and feature stories that will showcase the diverse organizations, associations, businesses, individuals and institutions that make up the Iranian-Canadian community in Toronto.

Our aim is to create a comprehensive body of material that will serve as a testament to the accomplishments of our dynamic community.  Undoubtedly, some of the individuals, organizations, or businesses features will be recognizable icons in our community. However, we also hope to introduce you to some new faces of up-and-coming leaders and inspirational trailblazers.  We hope that you choose to accompany us on this venture to map Tehranto and assist us along the way to uncover all the hidden valleys and forgotten trails that make the geography of our community so unique.