Sima Sahar Zerehi – “It started as a project in school when I was studying theatre at the University of Toronto,” explains Tara Grammy, a 24-year-old Iranian-Canadian actress, about her one-woman play Mahmoud bound for the Toronto and New York Fringe Festivals this summer.

“We were asked to write these ten minute monologues,” recounts Grammy, “I was mulling the assignment over in my head when I got into a cab that night.  The driver was an Iranian man who had been trained as an engineer, and naturally we struck up a conversation that stayed with me. The next day I grabbed some electric tape, created a fake mustache that I pasted onto my face, assumed an Iranian accent, and Mahmoud emerged as a character.” 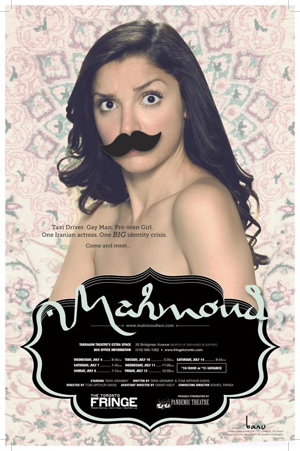 Looking at her 5 food nothing slight frame, delicate features and girlish mannerisms, it’s hard to imagine Grammy being able to pull off the role of a middle aged Iranian taxi driver, but that’s exactly what she accomplishes in her debut play.

After staging two workshop presentations of Mahmoud, the young actress was able to secure some modest funding with support from the Iranian community to showcase her one-woman play at Toronto’s Tarragon theatre in May 2011.

When speaking about the initial reception of her play, Grammy lights up, unable to suppress the huge smile on her face, “We were very, very lucky. Within the Iranian community news spread and our last show was sold-out.”

To keep up with the unprecedented audience demand, Grammy staged three other showings of the play a month later at another venue, which was also well received.

Grammy admits that this success opened a lot of doors for her, “For the next few months after Mahmoud I was busy working on a number of projects that came my way through people who had seen the play and wanted to work with me.  Mahmoud was kind of the springboard for me.”

While Mahmoud garnered a great deal of community support, it also received a major endorsement from one of Hollywood’s elites.

“It was a huge shock, I had just finished a performance,” recounts Grammy, “I bowed and the house lights came on and I saw Woody Harrelson standing there in the audience clapping.  The next night I bowed again and he was there again with ten other people he had brought along to also see the show.”

The Oscar-nominated actor, director and playwright, Woody Harrelson was thrilled with Grammy’s performance, calling it “dazzlingly good! A tour-de-force performance!”

In fact, Harrelson was so impressed that in a CP24 interview in April 2011, he referred to Mahmoud as one of the highlights of the Toronto theatre scene, putting it in the company of acclaimed productions such as Barrymore starring Christopher Plummer.

In the past year Grammy has been busy, she’s played the role of a young Afghani girl in Combat Hospital, a Canadian-British medical drama television series on Global about the medical core in Afghanistan.

Turning from television to experimental theatre, she starred in Nassim Soleimanpour’s White Rabbit Red Rabbit a unique production that required her to do a cold reading of a script presented to her in a sealed envelope just before the performance.

Giving way to her inner child, she played a Southern Bell as well as her overweight aging father the mayor, in The Travelling Salesman & His Magical Suitcase of Desires, part of Fringe Kids.  The play was a hit with young and young-at-heart audiences and selected as the Best of the Festival.

Working with the team at Pandemic theatre, Grammy took a turn towards the dark side in the fall, with an edgy role in Murder on Ossignton, a site-specific piece that required audiences to move from room to room in a house to witness various vignettes dealing with the themes of violence, jealousy, and desire.

Recently she finished Autogeddon, a neo-apocalyptic sci-fi poem about the modern world’s obsession with cars, a physically demanding performance that had her bouncing all over the stage like a circus performer.

Yo-yoing from television to experimental theatre to a children’s production may seem daunting to even veteran actors but Grammy’s schizophrenic approach to theatre has more than prepared her for such challenges.

In Mahmoud, she moves seamlessly from the role of an Iranian middle-aged man haunted by his past, to a teenage girl grappling with her unruly ethnic hair and identity issues, to a flamboyant gay Spaniard looking for love in the wrong places.

Using impeccable comedic timing and an irreverent approach to character development Grammy weaves these disparate lives together in a moving coming-of-age story set against the backdrop of Iran’s fraudulent presidential election in 2009.

Now, a year later, Mahmoud is back.

When I ask Tara if she expected the play to return to the stage a year later, she admits, “from that first performance I felt the effect that Mahmoud had on people and the reaction that they had to the character.  He’s so lovable and people can’t help but respond to him.”

This summer, Mahmoud will be part of the Toronto as well as the New York Fringe Festivals.  In Toronto the one-woman show will return to the Tarragon Theatre Extra Space for seven performances starting on July 4th and ending on July 14th.

While participation in the Toronto Fringe is determine via a draw, plays are chosen for the New York International Fringe Festival through an adjudicated process.  Mahmoud will be making its New York debut in August.

Grammy admits that being selected for the New York Fringe is a big deal, “there are only twelve international shows, and we’re one of only two selected from Canada.  That’s a huge honour.”

While the play has been a critical hit, Grammy and her team are still struggling to raise the necessary funds to support the production.

“Right now we have an Indiegogo account,” explains Grammy, “an online platform designed to help artists raise funds for their work.”

“To encourage people to donate we try to give back prizes to contributors like a signed poster, we also provide updates on how your money has been used so far and how it’s helped our work.  Our deadline is in July and we really hope to make our goal to raise $6,500”.

Grammy and her team are still a bit short of their modest fundraising efforts, which will cover basic expenses such as a visa application fee, the festival fee, advertising, and travel expenses.  Yet, she refuses to let finances distract her from her goal of bringing an even more polished version of Mahmoud to the stage this summer.

“I’m really excited to share Mahmoud with new Toronto audiences as well as with a whole new scene in New York,” gushes Grammy. “I know that this play will resonate with audiences in any big city because it’s not just a Toronto story or an Iranian-Canadian story, it translates for anyone from an immigrant background living in a metropolis and struggling to find themselves.”

To read my original review of Mahmoud visit: https://shahrvand.com/archives/12991

To check for show times or get more info on Mahmoud visit: www.mahmoudtaxi.com