Sima Sahar Zerehi – If you’re the Minister of Finance you boast about your experience in the business sector – how you were able to grow a company or save a failing enterprise from certain demise.  As the minister of Environment you talk about your work to green our communities, your knowledge about conservation, climate change and waste reduction.

But year after year ministers of immigration introduce themselves by merely stating: “I’m the son of an immigrant.” Somehow standing before a room of immigrants compels these ministers to search deep in their pedigree to connect themselves to this identity. 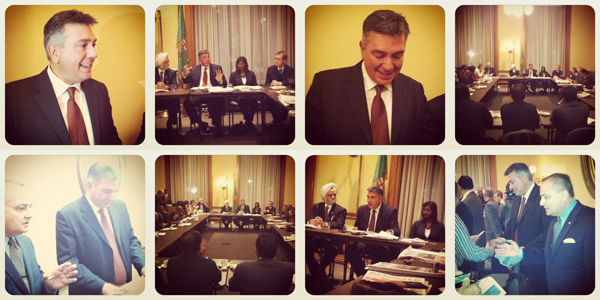 Not wanting to reverse the tide, the newly minted Ontario Minister of Immigration Charles Sousa – a guy who looks and sounds more like the good old boys than the newcomer on the block, stood in Queen’s Parks Committee room 2 on Monday December 12, before a crowd of journalists, editors, and reporters from Toronto’s ethnic media outlets and spoke about understanding the challenges of immigration by sharing his story of having to learn English in kindergarten.

“I know what it’s like to speak a different language at home,” confided Sousa, born to immigrant Portuguese parents. “I had difficulty in kindergarten and grade one to speak English.”

While Sousa might not yet have his introductory speech fine-tuned for an audience of members of the National Ethnic Media and Press Council of Canada, he does seem to have a firm handle on the issues top of mind for Ontarians.

Expertly Sousa positioned himself in opposition to Federal Minister of Immigration Jason Kenney and to the Conservative Federal government.  In Sousa’s narrative Ontarians are being left behind by the Conservatives when it comes to funding for settlement services and the ability to have a greater voice in selecting who settles in this province.

In reality Ontario has been left behind when it comes to settlement funding.  The Conservative government is cutting $31.5 million from immigrant settlement services in Ontario in 2012 while increasing funding for every other province.

This is the second year in a row that Ontario has suffered cuts to settlement services.  In 2011, Citizenship and Immigration Canada earmarked $346.5 million for settlement services in Ontario, a decrease from $390 million the previous year. For 2012-13, Ontario’s share will decrease an additional $31.5 million to $314.9 million.

In 2011-12 the federal government allocated $583 million for settlement services across Canada, down from $622 million the year before. For 2012-13, that figure will once again be cut to a total of $577 million across Canada.

While the number of newcomers continues to increase, in 2012 Ottawa will spend $6 million less on services for immigrants such as language-training, job searches and housing help.

In speaking about these cuts to settlement services in Ontario Sousa promises to “continue to fight for a new deal for Ontario.”  His aim is to hammer out an agreement with the federal government that will allow Ontario like Quebec to have a greater say in its immigration matters.

Sousa explains that he is working on ensuring Ontario has more input on funding and service extensions, the creation and maintenance of various programs for newcomers, and immigration selection.

In speaking about the new measures proposed regarding the immigration backlog and family reunification, Sousa diplomatically declines to go on the attack, and merely states that he hopes to see greater transparency when it comes to the implementation of new measures by the federal government on immigration issues.

In the past month the federal government has introduced a series of measures regarding the immigration backlog and family reunification. Currently, families are waiting for over seven years to have their application processed in order to be reunified with loved ones in Canada.

We know that there are many arguments for family reunification; parents and grandparents contribute to our well being as a community and nation; with more adults working the household income could be enhanced; and family reunification gives a boost to economic consumption as larger families inevitably consume more goods and services.  Yet, little has been done to expedite family reunification and alleviate the multiyear waiting periods.

One piece of good news from the federal government has been the recent announcement regarding the increase in the number of sponsored parents and grandparents Canada will admit next year. The target numbers for parents and grandparents has steadily fallen from 20,000 in 2006 to 15,000 in 2010.  Increasing the targets to 25,000 in 2012 will make a decided impact on the number of families who will finally be reunited.

While measures have been taken to increase the number of sponsored parents and grandparents, more can be done for immigrants in other categories. It is no secret that Canadian population increase will soon be driven by net immigration.  Canada needs to ensure that we are replacing our aging workforce as well as meeting our vision in terms of expanding our resources and knowledge sectors.

Unfortunately, the good news in the recent announcement about increasing the target number of sponsored parents and grandparents was accompanied by troubling measures that will surely negatively impact Canadian families.

The recent proposals from the federal government included a stipulation to put in place a pause of up to 24 months on the acceptance of new sponsorship applications for parents and grandparents effective November 5, 2011.

Preventing families from submitting applications is inhumane; every family should be provided the chance to submit an application for reunification.

The solution for eliminating the 165,000-strong backlog of parent and grandparent applicants is to hire more people to review applications and not simply refuse to look at applications.

The Parent and Grandparent Super Visa

The federal government also recently announced the new “Parent and Grandparent Super Visa,” which will be valid for up to 10 years. The multiple-entry visa in designed to allow an applicant to remain in Canada for up to 24 months at a time without the need for renewal of their status. The Visa, which came into effect on December 1, 2011 promises to be issued within eight weeks of application. Applicants will be required to obtain private Canadian health-care insurance for their stay in Canada.

While on the surface this measure seems to be a move towards remedying our immigration backlog, upon closer examination it becomes clear that this is a temporary solution at best that can only work as a band aid rather than a cure for our ailments.

Multi-entry visas have already been part of our system – in fact we have had the 5-year multi-entry visa in place for a number of years and it has yet to make an impact on our immigration backlog.  In reality, families accessing visitor’s visas have been subjected to extremely high rejection rates; particularly those form countries like Iran.

A visitor visa is an inadequate substitute for permanent residency status particularly if it’s not accompanied by a mechanism that will allow applicants to land as permanent immigrants after a number of years of residency in Canada.

Ultimately, much more work needs to be done on fine-tuning the Parent and Grandparent Super Visa before it can be posited as a real solution.

The federal government in partnership with the provinces should look at how we can utilize existing programs to meet the needs of Canadian families.  One such measure would be to expand the Canadian Experience Class to allow long-term residents and temporary workers to land.

For years community and labour advocates have expressed concern about the policy shift of the Ministry of Immigration whereby immigrants are increasingly being understood and treated as cheap and exploitable labour to be brought here through temporary visas.

The Conservative government has brought in numerous changes to allow more flexibility to visa offices to bring in skilled workers to meet labour needs. Employers claim labour shortages of both “high-skilled” and “low-skilled” workers with much of this perceived labour shortage occurring in the lower skills sector.

Under the existing point system, “low-skilled” workers will never have enough points to stay in Canada as permanent residents and never qualify as citizens or be able to bring their families to Canada.

We have heard numerous testimonies from employers who are concerned that these temporary work programs are ineffectual as workers are only in the country for a few years before being forced to leave after they have finally been trained and settled in their new jobs. Clearly, employers want their workers to be in Canada on a permanent and stable basis.  This is common business sense.

Finally, these applicants already reside in Canada and have ties to our businesses and communities.  In addition, they have already been subject to criminal and health checks.

Furthermore, we already have an internal crisis in the country with the over 200,000 to 500,000 undocumented immigrants living and working in this country.  These workers are already employed in many of the industries that are in need of “low skilled” labour. They have established roots not only in our industries and work places but also in our communities and neighbourhoods.

From Gridlock to Burkas

If Minister Sousa is looking for open and transparent debate with the federal government he has much more to discuss than simply increasing Ontario’s share of settlement funding.  In these uncertain times when Torontonians are faced with a mayor who blames immigrants for everything from gridlock to cuts to services, and a Prime Minister who distracts us from the real problems of the immigration ministry by focusing on women wearing a burka during a citizenship swearing-in ceremony, we need someone to stand up and speak about the real issues that plague our immigration system.