Sima Sahar Zerehi – It seemed like a simple plan, gather a few friends, find a Yalda event, and let the celebrations begin.  But nothing is ever as simple as it seems.

For most non-Iranians Yalda night is known as the Winter Solstice, the longest night of the year.  In Toronto those in touch with their Pagan sides gather for the Winter Solstice Festival at Kensington Market and wile the night away with lanterns and fire-dancers.

But for die-hard Iranians Yalda Night (Shab-e Yalda), is an important festivity that must be commemorated with food, friends and family. 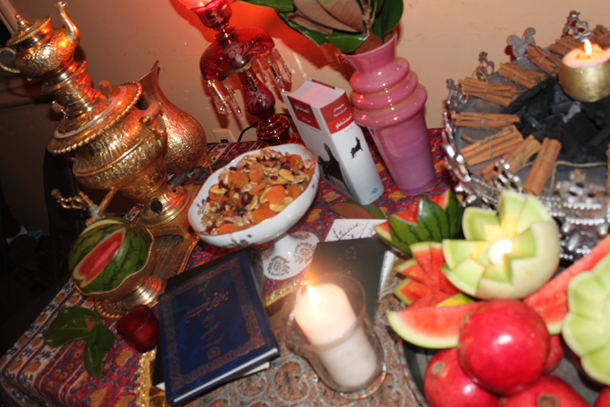 In Toronto, the need to celebrate something, anything, during a time of year when temperatures plummet to negative-much-too-cold and the sky is pitch black by four in the afternoon, is even more dire.

Although, Yalda is not a state-sanctioned holiday in modern-day Iran, it has nevertheless endured as an important seasonal celebration with its own customs and traditions.

The origins of the Yalda tradition can be traced back to Mithraism, one of Persia’s ancient religions.  According to Mithraists, Yalda represents the birth of Mithra, the Persian god of light and truth.

With the fall of the Sassanid Empire and the rise of Islam, the original significance of Yalda was lost, and the night became a social occasion for friends and family to gather.

We had the friends part down; a ragtag quartet, three girls and a guy, two Tehrantonians, one newcomer from Iran, and a Chinese-Danish-quasi-Canadian ready to be indoctrinated into the Iranian culture.  What we lacked was a venue.

Nevertheless, we were determined. One of my friends, let’s call her Darya for the purpose of this article, was the one who had fueled the Yalda fires amongst us.  In her circles, Yalda was not a celebration to be missed.

She was armed with years of memories of Yalda celebrations; she wanted the traditional foods, an assortment of nuts, pomegranates and watermelons.  She insisted on the Yalda customs of story-telling, and above all, she wanted to be in a place that exuded the warmth of an Iranian family gathering, reflected the esthetics of Persian culture, and disseminated the tastes of home.

It was a tall order but we set to work.  In the true Iranian tradition, we had left all the planning to the last minute.  A severe flu, work and school obligations and a thousand other mundane preoccupations had prevented us from making any prior arrangements, and it was the morning before Yalda night when we were scrambling to make last minute plans.

At first we were confident that we would face no difficulty with the quest at hand, after all how hard can it be to find a place to celebrate Yalda in a city nicknamed Tehranto.

We knew of one house party in Richmond Hill, a party that was hosted by a young man reputed for his showmanship and musical talents.  However, we were downtown and the trek to Richmond Hill, even with the lure of live Persian pop-music was out of the question.

So we decided to explore the possibilities that were a bit closer at hand.  Our primary target was Pomegranate Restaurant on College and Bathurst.  The restaurant known for its unique Persian-fusion and picturesque décor was an ideal backdrop to our Yalda aspirations.

We had also heard that Pomegranate was continuing their annual Yalda tradition of hosting storyteller Ariel Balevi for the occasion to share tales from Nizami Ganjavi’s The Haft Paykar, A Twelfth Century Romance. These were the fairytales of my childhood, tales like Layla and Majnun, the Iranian version of Romeo and Juliet.

I was already picturing the evening, the alluring pull of a well-spun yarn, a room decorated with Persian rugs and handcrafts, and the intoxicating aroma of Iranian cuisine.

It seemed that our work was done; friends, food and festive venue appeared to be all at hand.  The one thing left to do was making a quick call to secure our reservation and we would be on our way.

At least that’s what I thought, filled with false confidence; I eagerly dialed the number to the restaurant.  Owner, Danielle Schrage was the person on the other side of the phone.  “I’m so sorry,” said the welcoming voice, “we have been all booked for Yalda night for weeks now.”

Danielle Schrage who runs Pomegranate Restaurant with husband Alireza Fakhrashrafi explained that in the past few years Yalda has become more widely popularized amongst non-Iranian customers, as such due to overwhelming demand the quaint dining room had been booked solid.

Danielle also informed us that the restaurant had started their storytelling series over the weekend and that tonight, on the actual eve of Yalda, no storytelling would take place in order to accommodate a greater number of diners.

We were familiar with this refrain; the majority of events commemorating Yalda had taken place over the weekend.  The Iranian Women’s Organization of Ontario had organized a jam-packed Yalda dinner at Karoun Restaurant on Friday night, complete with an opulent Yalda table brimming with winter fruits, nuts and flowers.  They had a live band performing popular songs and a dance floor.  To complete the festivities they entertained the audience with a traditional dance performance while guests snacked on pomegranate and watermelon.

Tirgan Festival had also hosted their Yalda dinner over the weekend on Saturday night.  Their event included all the traditional Yalda fixings. The dinner was hosted by Pomegranate Restaurant and the night’s entertainment had included a recital of the Shahnameh (The King’s Letters); Naghalli (Story Telling), a puppet show, musical performance by the Iranian National Choir; a dance performance by the Association of Guilan Supporters in Toronto and Fal-e Hafez (Hafez Fortune Telling).  They also had a dance floor and DJ to dance away the long, dark winter evening.

But, as I said the flu, school and work obligations had gotten in the way of us getting our Yalda fix over the weekend.   Nevertheless, we felt a sense of entitlement, after all tonight was Yalda, you don’t postpone Christmas just because it falls on a weekday, so why should we settle for a pre-Yalda party when the night was before us.

Determined to celebrate regardless of our recent setback I flexed my fingers and dialed another popular venue, Banu, a trendy Iranian Kabob and Vodka Bar.  This time I spoke to owner Samira Mohyeddin, “We had our Yalda event at Banu last night,” she stated, “it was an amazing party; you guys should have been there.”

Once again we had missed the boat but luckily we were able to squeeze into one of the remaining two available reservations for the evening.  Yalda party or not, we were going to dine in style on traditional Iranian fare (with a modern twist) and commemorate Yalda with food and friends.

Despite its lack of Yalda entertainment, Banu offered us a chic-Iranian inspired lounge as well as a delectable Yalda feast; we got our pomegranate fix via our pomegranate vodka martinis, our nuts were offered in a bowl of pistachios to snack on before our meal, and the watermelons came as a side to our appetizer plate of traditional Iranian bread and cheese.

We dined like kings on a lavish spread of kabobs and dips, and topped the meal with a duet of Iranian ice creams and a steeped cup of Iranian tea offered with a trio of miniature, cookies and baklavas.

Once our appetite for food was satiated we begun to remember that we still had a few things to do before we could say we had successfully celebrated Yalda.  So we headed home and broke out the Hafez.

For the uninitiated, no Yalda celebration is complete without a Fal-e Hafez (Hafez Fortune Telling).  Hafez was an Iranian poet in the thirteenth century known for his enigmatic versus.  It is believed that his divan of poetry serves like an oracle containing answers to all life’s questions.  Fal-e Hafez goes like this, someone poses a question and than opens the book of verse to a random page and reads the poem, the allusive lines of poetry is designed to evoke self-refection forcing the person who poses the question to search within for the true answers.

Although, we had no book of Hafez poetry at hand, we weren’t going to allow a small matter such as that prevent us from completing our Yalda ritual.  A quick search on the net unearthed an online version of the Fal-e Hafez, one would simply pose a question and click on a link to land on a random verse.

Our friend, who had just arrived from Iran, took the lead in navigating us through the intricate verses of the seminal poet, and so we formed a translation circle, converting the ancient poetic text to everyday Farsi sentences and those to English in order to include our non-Farsi speaking friend.

We read and translated poetry for hours, conversing about the similarities between Hafez and ancient Chinese philosophy and the German philosophers’ unabashed theft of these ancient doctrines.

This was our Yalda night, reading Hafez on the internet, drinking Jasmine tea from China brought by our friend Benjamin’s mom, smoking a shisha from a pipe made in Japan, Listening to Soli, Ramesh, Farhad on our iPod and watching YouTube videos of Kiosk, 127, and Googoosh.

Culture is preserved through rituals, traditions, celebrations, and festivals, above all culture is kept alive by the simple act of deciding not to forget, or forgo.  Every time someone makes a conscious effort to try to keep a tradition alive by breathing new significance and meaning into it, by making it relevant in a new setting, or by introducing it to new groups of people, culture is preserved and renewed.

This is how our foursome kept Yalda alive.  Although, Yalda has not been a priority for my family in the past, I know that next year, I’ll remember to celebrate this occasion, because I’ll have the memories of a dark, cold winter night, set ablaze by the light of intelligent conversation shared by unforgettable friends.

Some traditions are impossible to defeat, and celebrating the winter solstice on the longest night of the year in the depths of December is clearly one of these.  Perhaps this is why Yalda has survived when so many ancient traditions have faded with time, history, and winds of political change.