Sima Sahar Zerehi – Bea is like a kid in a jungle gym, she leaps from her bed swinging from the bedpost with the kind of buoyancy and infectious joy that one only sees in young children at play.  Her energy is contagious, her joie de vivre radiating across the theatre, with a crooked smile or a mischievous look she disarms. 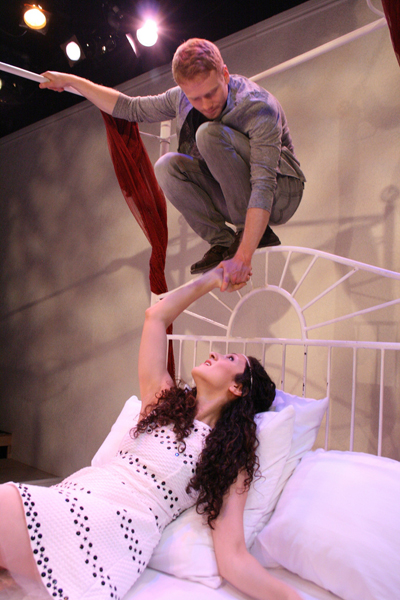 But Bea played by Bahareh Yaraghi, the title character in Mick Gordon’s play, is no child; she’s a woman in her late twenties, suffering from a debilitating disease that confines her to her bed.

While the play grapples with difficult questions around disease and assisted suicide, it is far less a narrative about illness and mortality than a meditation on the power of living life to its fullest, even under the most trying circumstances.

The play, centred on Bea’s sick bed, celebrates the bonds that connect Bea, her stern mother, and vivacious caregiver ‘definitely not Gay’ Ray.  The production showcases how humour, sensuality and beauty continue to find us even at the darkest moments in life.   Even from the confines of her bed, Bea reaches out to Ray to open her world to new experiences through music, theatre and sex.

Yaraghi, who carries the weight of the play, is charming, funny, poignant, and almost acrobatic as Bea, oscillating effortlessly between a woman gripped by unimaginable physical and psychological pain at the precipice of death, and a young woman hungry to experience all that life has to offer.

Speaking about preparing for the role Yaraghi admits that initially she was a bit concerned about the physicality that director Aleksandar Lukac had envisioned for the play.

“When I first had a meeting with Aleksandar I was injured.  He was stressing how he really wanted Bea to be highly physical, I was nervous that my injuries might prevent me from realizing the role as he saw it, but because of how much I loved his vision I worked hard and trained for three months to get stronger and play her.”

Yaraghi’s physical portrayal of Bea is central to the experience of the play, her push and pull as she demonstrates the toll that her disease takes on her body as well as the strength and vigour of her spirit is all showcased through the physical theatre that unfolds onstage.

Ultimately, this Actors Repertory Company production is a success offering audiences a surprising theatrical experience that invite laughter, tears and further reflection.  The three-person cast including, Brendan McMurtry-Howlett and Deborah Drakeford, deliver strong performances that draw the audience into the story; the synergy between the three is almost electric in parts.

In addition to receiving critical praise, with a four-star rating from NOW Magazine, BEA has also garnered positive audience feedback, according to Yaraghi, the response to the show has been overwhelming.

“It’s incredible how well people have responded to the play.  This is the most feedback I’ve ever got in a show; strangers are coming and sharing how they’ve been impacted.  There are so many of us that have friends or someone that has been in a similar situation with a disease or disability.  Often it’s too hard to talk about it but once people see the show they are coming to us with personal stories.”

BEA is running at Toronto’s Factory Theatre until this Sunday May 26.

A relative newcomer to the theatre scene, Yaraghi is no stranger to playing difficult roles.  Since graduating from Humber College’s theatre program a few years ago she has starred in Setareh Delzendeh’s multimedia production, Homeland, produced by Godot Art Productions, which was part of Vancouver Fringe Festival and Toronto’s Small World Music Festival.

Much like Bea, her role in Homeland called for a physical theatre that required Yaraghi to use dancelike movement to reflect on the themes of exile and belonging.  Homeland was nominated for a Dora Award in 2011.

In 2012, Yaraghi starred in Theatre Passe Muraille’s production of Prisoner of Tehran based on Marina Nemat’s memoire of the same title.

“This was a story that was very close to home and allowed me to think about my Iranian roots and the political situation there.”

Yaraghi also starred in the 2013 Theatre Calgary and Citadel Theatre production of The Kite Runner, a Canadian premiere.

Much of her focus recently has been on the Actors Repertory Company, an actor-run theatre company that currently staged BEA.  “We’re a small company and our mission is to bring international stories on stage.”

“Before I graduated from Humber, I was hired by Soheil to take part in the original production of Hallaj at Richmond Hill Centre for the Performing Arts.  He’s been a huge supporter of my work, I’m very grateful for his belief in me.”

This coming August, Yaraghi will appear in Graham Isador’s production of I Am Very Far as part of SummerWorks Theatre Festival.  “I’m really excited to start work on this innovative project.  I really like working on productions that require physical theatre and use multimedia.”

To get more info on BEA visit http://arcstage.wordpress.com/