Sima Sahar Zerehi – In Tehranto nothing is as it seems, to get at the truth, you have to scratch away the surface, peel away the facades, and even then there’s no guarantee that you can get to the core.

No one is simply a retailer or grocery clerk in Tehranto.  There are no artless shop owners and one-dimensional stores.   Tehranto is a place of double-entendres and fluid identities.

Similarly, the businesses in Tehranto are never simply what meet the eye.  A grocery store can be a meeting place, a bakery acts as a sanctuary, and a bookshop becomes a cultural hub.

On Yonge Street, just south of Finch, Pegah Books has held a distinguished place amongst the strip of Iranian-owned stores for over a decade.  You don’t have to be a bibliophile to have visited Pegah.  Fans of Iranian pop music and seasoned concert-goers know Pegah as the place to buy event tickets. 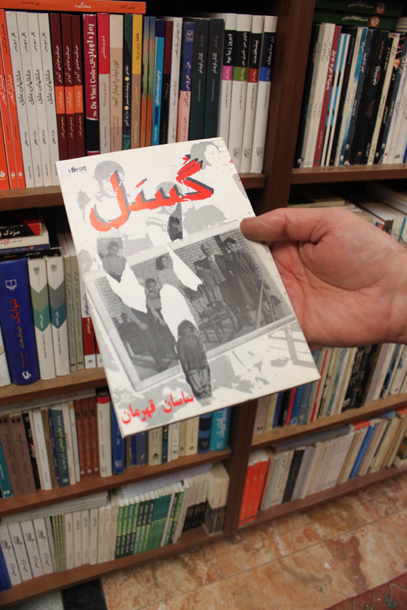 The shop’s convenient location steps from Finch subway station, coupled with its owner Mojtaba Darakhshan’s business savvy, have made this seemingly unassuming store a Tehranto destination for decades.

The first incarnation of Pegah Books called Daneshe Noe (New Knowledge) was located in a walk-up on Yonge and Eglinton.  This was the kind of store that you had to know about to be able to get to.  The shop was a joint venture between my father, Hassan Zerehi, who was more interested in reading and discussing the merchandise than selling it to customers, and Mojtaba Darakhshan the current owner of Pegah Books.

Today, Darakhshan has been in the book business for over two decades.  Speaking of Pegah Books, he states, “This is a real bookstore, perhaps the first real Iranian bookstore in Toronto.”

There’s no denying that Pegah Books is a real bookstore. The relatively small shop’s lined with floor to ceiling bookshelves brimming with titles of every genre.  Although most of the texts are Farsi language novels, essay collections, and volumes of poetry, these days a few English translations and titles can also be found.

Like many others of his generation, Darakhshan is a pioneer in Tehranto.  He’s one of those immigrants whose vision, innovation and business sense helped to make Tehranto a reality.

Regardless, Darakhshan is not an easy man to interview.  He doesn’t like to talk about himself, and he constantly shifts the focus of the conversation to his books rather than himself, and his career as a bookseller, publisher and distributer.

In many ways, Darakhshan the man, is hidden under the covers of his books neatly stored amongst the shelves somewhere between a collection of political essays and short stories chronicling the extraordinary lives of a generation of Iranian immigrants in Canada.

It’s hard to get a straight answer out of Darakhshan regarding his customers, the evolution of Pegah Books and his role in the publication business in Tehranto.  He prefers to talk about the work of others like Sasan Ghahreman.

Darakhshan attributes his greatest success as a publisher to his collaboration with Toronto based writer Sasan Ghahreman.  Working in partnership with Ghahreman yielded approximately twenty-five titles for the Pegah Books/Afra Publishing team.

Therefore to get a better insight into Darakhshan’s role as a publisher we turned to his collaborator Sasan Ghahreman.

Unlike Darakhshan, Ghahreman is an easy man to talk to.  Like most writers, he knows that he has much to say and little time to say it, so he speaks quickly and shares many facts.

Ghahreman speaks about why a Toronto based Farsi language publishing company was needed in the nineties.  He notes, “There was no publication for Farsi books in Canada at that time.”

He adds, “There were many writers but only a few publishers of Farsi language books in Europe and North America.”

Ghahreman who is a novelist himself speaks about his own difficulties in publishing his work.  “I remember when I finished my first novel, I contacted Nas-re Baran in Europe, they asked me for $2,000 and told me that it would take up to two years to publish my book.”

To remedy these barriers Ghahreman and Daghighian started Afra Publishing.

As Ghahreman states, “Afra Publishing was the first, and relatively, the most professional Iranian publication in Canada. There have been other publications, such as Javan, spearheaded by Saeed Honarmand who later moved to the US, Forough, in Vancouver or Nima, in Montreal. Publications such as Shahrvand and Iran Star have also published some books during the last two decades. But, none of them were in fact specifically professional publishing companies. Even Afra Publishing, with almost fifty published titles, plus about eight online publications, couldn’t act as, or compete with similar Iranian publications in Europe or the US. The main reason is definitely financial problems.”

Ghahreman adds, “During the first two years we tried to be as professional as possible. But, we didn’t have our own printing shop (which was the main cost) and we weren’t able to safely distribute our books and hope for the recovery of our investment (let alone making any profit.)”

Ghahreman speaks about the financial difficulties that forced Afra Publishing to stop its work.  He explains, “after the publication of four titles, due to financial problems, Afra Publishing was forced to stop production after about two years with almost $30,000 of loss.”

It was following this experience of financial turmoil that Ghahreman and Darakhshan began to work together.

“It was almost two years later, after a friendly talk with Mr. Darakhshan, that the second phase of Afra Publishing’s activities began.  He accepted to collaborate by financially investing, either fully or by sharing the printing costs with the authors or some other individuals, and to distribute the published books,” recounts Ghahreman.

While Darakhshan was responsible for financing and distributing the books Ghahreman and Daghighian spearheaded the editorial aspects of the projects.

The Afra Publishing/Pegah Books team was responsible for professionalizing a community of Iranian-Canadian writers.  This team published the works of literary figures such as Saghi Ghahreman, Sasan Ghahreman, Mehri Yalfani, Iraj Rahmani, not to mention my own parents, Nasrin Almasi and Hassan Zerehi.

As Ghahreman states, “many of us were writers but we were not yet established.  Publishing our works allowed us to take ourselves more seriously and to think of our colleagues as well as ourselves as professional novelists, poets and storywriters.”

Ghahreman adds, “There’s a misunderstanding about writing and writers in our culture.  Sometimes we use the term writer too liberally.  But until you have been published and have been criticised by others you have not become a professional writer.”