Sima Sahar Zerehi – It’s a small office, with no windows, more like a utility closet to be honest.  Three mismatched desks and a few file-cabinets line the walls, a bookshelf housing various brochures is stuffed in one corner and a small bar-fridge is shoved behind one of the desks. Two additional chairs are squeezed against the remaining wall for visitors.  The overall effect is of a crammed and stuffy space that looks like it may burst at the seams. 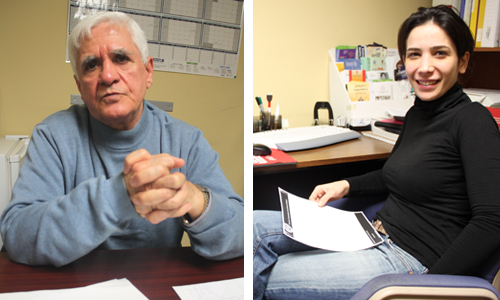 This space is the main office of one of Tehranto’s oldest organizations, the Iranian Community Association of Ontario or Anjoman-e Iranian in Farsi.

“We’re lucky it’s winter,” chuckles Seyd Mohammad Asari, the current Chief of the Board of Directors for the Association, “with no air-conditioning you can imagine what this room would feel like in the summer.”

It’s hard to believe that this small space that barely passes for an office is the headquarters for an organization that has been serving the Iranian community for 25 years.

The Iranian Community Association was established in 1986 and its formation and history are synonymous with the evolution of the Iranian community in Toronto.  In a future article we will look back at the beginning years of this seminal organization and discuss its origins with Manooher Missaghi one of its founding members and first President.

Today, the office is staffed by the volunteer services of Seyd Mohammad Asari an active senior who became involved in the association in 2009 and Maryam Rouzbahani, a young placement student from Seneca College’s Social Service Worker program.

When I first arrive, a gentleman in his forties quickly got up to make room for me.  Even three people in the space is a stretch but four people would be almost impossible, particularly when you consider the winter coats.

The gentleman, who was a trained engineer, was suffering from an injury that prevented him from doing his previous job and looking for resources that could assist him with the transition.  Maryam was on her computer Googling possible resources and Mr. Asari was offering assurance, guidance and a listening ear.

In this way, the intergenerational duo keep the doors open by providing referrals and services to Iranians in need.

Mr. Asari is the main volunteer, “I’m here four days a week from 10am to 2pm at least, sometimes later depending on what’s going on in the day.”

“We get about 10 to 12 visits from people in need of services a week and another 10 to 12 inquiries via phone,” explains Asari.

“The program includes exercise classes, Bingo tournaments, chess games, Ping-Pong and Backgammon,” Asari explains.  “We get about 30 to 40 people per week,” he offers “and most of our participants are women.”

Asari works 5 days a week as a volunteer in this windowless office.  He started becoming more involved in the organization in the past few years.

He explains, “Lately, we had problems with a lack of volunteers.”  He admits that it was his peers who motivated him to take on this role, “I was urged by friends to take on this position.  They thought that I could help to reinvigorate this organization.”

Asari confesses, “I felt responsible, the Association has had an important role in our community and a reputation for helping people in the past.”

From August 2009 to February 2010 Asari ran the Association singlehandedly.  His efforts to keep the Association alive panned out as a new Board was established.  Currently, the Association is kept alive by the efforts of less than a dozen board members, committee heads, and volunteers.

Active seniors are the backbone of the current Association.  “Most of the members of our team are seniors, people like me who are retired and have the time and ability to volunteer in the community” notes Asari. “Young people are too preoccupied with supporting their families and advancing their careers to invest so much time and energy into this kind of community work.”

In addition to the Friday seniors program the Association also organizes regular outings and trips for seniors.  “We organized seniors trips to Quebec, a trip to Ottawa as well as local trips to the zoo and to the casino,” states Asari.  These social outings allow seniors to maintain active social lives by meeting new friends and embarking on adventures in their new homes in Canada.

In addition to programs for seniors the Association provides a range of services for newcomers and other community members.  “People come to us for translation and interpretation help, they ask us for help in writing their resumes and finding work, they come to us to figure out how to get their license, OHIP card, passport, or to get information on how to register their kids in school” lists Asari.

Although the City offers some nominal assistance to the Association by providing space for some of its programs, the organization mainly relies on the annual membership fees of $20/person as well as revenues generated from events to keep its doors open.

Asari concludes, “Most importantly, I want members of our community not to look at the Iranian Community Association in the same light as before, I want them to see us for what we are today.  This Association has had its ups and downs but those of us who are leading the group today are working on rebuilding the credibility of the organization.”