Sima Sahar Zerehi – You can take the girl out of Tehranto, but you can’t take Tehranto out of the girl.

I was in Buffalo – doesn’t matter why – flipping through Art Voice, their version of Now Magazine.  My mission was to explore the local art scene and get a sense of the culture in Western New York.

I was weighing my options between a rendition of Tennessee Williams’ Cat on a Hot Tin Roof and a fundraiser for a local arts festival, when one of the listings caught my eye. 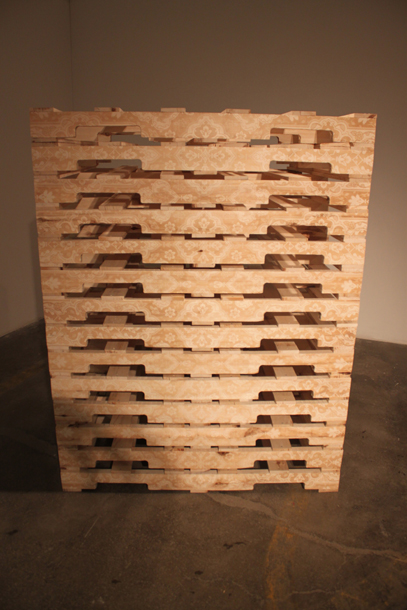 Now when I’m in Toronto, I may have my pick of a dozen art shows featuring Iranian-Canadian artists in any given month. But, for some reason, the idea of coming across an art exhibition headlined by an Iranian-Canadian woman in Buffalo was too serendipitous to ignore.

The lure of finding a fellow Iranian in this new place motivated me to trek across the city on a very cold and snowy Friday night in search of a piece of Tehranto in Buffalo.

To be frank, not just any exhibit featuring an Iranian artist would have motivated me in this way, but I was fascinated by the glimpse I had received into Soheila Esfahani’s work. Her haunting canvases redefined elements of Persian calligraphy through modernist abstractions.

Esfahani’s pieces are inspired by verses from Rumi, a 13th century Persian poet. Like other mystic and Sufi poets, Rumi’s work chronicle humanity’s journey through the use of music and dance towards reunion with God.

In Rumi’s verses God becomes an unattainable lover and this spiritual journey for holy reunion is described in sensual terms that explore human desire, longing and the quest for fulfillment.

In her talk, Esfahani speaks of her journey in creating these works.  She states, “I was making abstract paintings, but there was something missing.”

She explains, “I was remembering what I left behind, actually writing in my language was really captivating me.”

Esfahani describes her work as a “visual manifestation of the writing.”

The artist’s work is like an inside joke, her mischievous opuses create various levels of misunderstanding.  She admits that when confronted with her pieces many people grapple with the concept of translation.

She speaks about how many non-Farsi speaking viewers are challenged by her use of Persian script, “People often ask me, can you translate it? Can I understand it? How can I access it if I can’t read it?”

Esfahani’s canvases are haunted by the dismembered words and phrases from Rumi’s best known versus.  The seemingly familiar letters, distorted into symbols no longer accessible to readers are organized as dynamic patterns that jump off the canvases through the use of colour and texture.

The words taunt the viewer challenging us to read what is no longer legible; meanwhile the distortions invite the eye to explore lines, texture, colour, and pattern.

There’s a playfulness to Esfahani’s work, the scribbling on the glass, canvas and mylar surfaces seem to be caught in a spirited dance. Words and letters peeking out from underneath familiar patterns of Persian calligraphy.

Some of her pieces appear to create topographies through the abstraction of calligraphy, the manipulation of texture and emphasis of negative space.

Esfahani describes these occurrences as “maps and islands happening – when I’m searching I’m looking for a kind of map.”

Above all, Esfahani’s work speaks of longing.  She notes, “After living ten to twelve years in Canada, all of a sudden I was homesick.”  It’s this desire for something that is unattainable, a homeland that lures Esfahani towards Rumi and the viewer to Esfahani’s work.

Esfahani notes that she feels a kinship with fellow-artist Shirin Neshat whose past works also include the manipulation of Persian calligraphy.  She sees Neshat’s art “as works such as mine that are inspired by one culture but always present in another culture and the audience might not know the language.”

She speaks of her preoccupation with the concept of translation and poses the question, “does a work that takes up space and is visual really need translation?”

She notes that she became fascination with the concept of “translation as carrying across – as bringing something over.”

At this point in her artistic journey, Esfahani begins to experiment with sculptural works and found objects.  She explains, “I looked at skids as representations of this travel back and forth – an object that brings across all of this stuff we use – they bring across things from another culture from another country, they are always in transit.”

Esfahani feels a connection to these seemingly ordinary utilitarian objects.  She states “they are objects that are living in-between,” and adds “ somebody like myself could be a person who looks at themselves as living that in-between – I cannot go back, but at the some time I may not ever be fully here either.”

When speaking of her art Esfahani turns to post-colonial theory.

She states, “I was looking back at the philosophical works of people like Homi Bhabha that talk about that moment of ‘in-betweeness’ as a moment that brings meaning out.”

I have to be honest, at this point in her talk; I could feel my eyes rolling back uncontrollably.  You see I have always approached post-colonial theory with a grain of salt.

I’m telling you, if you had to sit through endless graduate seminars with every Ali, Rubea and Narinder identifying themselves as hybrid identities and carrying their copies of Bhabha’s Location of Culture and Spivak’s Selected Subaltern Studies like evangelicals and their bibles, you too would develop a healthy dislike of post-colonialism.

But there was sincerity in the way Esfahani found the necessary vocabulary to describe her art through Bhabha’s words.

I thought, sure, an Iranian-Canadian post-modernist artist, wearing a hijab, in a Buffalo Art gallery, flanked by abstractions of Persian calligraphy inspired by Rumi’s verses – if this isn’t hybridity than I don’t know what is.

So, in the spirit of making peace with post-colonialism I’ll end by saying that in my project of Mapping Tehranto, I was inspired by the notions of liminal third spaces, of how an Iranian-Canadian identity can juxtapose itself on the topography of a cityscape.

Yet, I feel that perhaps my exploration of Tehranto has been too literal; the mapping of community spaces can also be inscribed on the bodies that identify themselves as part of these locals.  As such by the simple act of searching for Tehranto in Buffalo I located the culture of Tehranto onto the Buffalo art scene.