Sima Sahar Zerehi – Have you ever had a crush on a voice?  My first voice-crush was in my early teens on Leonard Cohen, I could care less that Cohen was old and wrinkly by the time I first discovered him. He could have had a hunch-back with a single bloodshot-eye, all I wanted was his “Hallelujah” lulling me to sleep; his baritone voice made me quiver. 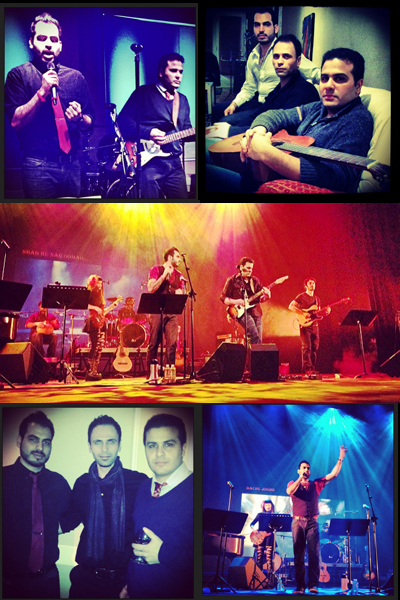 I’m not a teenager anymore, and I thought I might be immune to voice-crushes by now; I’m all grown up after all, well sort of.  All that changed when I heard Neemeha’s Behrouz Jahanbeiglou’s tenor belt out ‘Asheghooneh’ (loosely translated as lovingly).  Sure, it didn’t hurt that it was a love-song, but trust me, I’ve heard Behrouz sing O Canada and he makes our lack-luster anthem sexy.

Behrouz is one-third of the Tehranto band Neemeha, a local group that includes his older brother Behman as well as drummer Arshia Basiri.

While it’s hard to classify Neemeha’s music, as the group is still exploring various musical genres and styles, one thing is certain, this is no typical Iranian-pop-band belting out the same tired tunes overplayed at family weddings and community dances.  In fact, they refuse to use the 6/8 clave typical to Iranian dance songs.

At the heart of Neemeha we find the Jahanbeiglou brothers, Behrouz the younger of the two, is the voice of the band on stage, Behnam is the spokesperson offstage. Between the two of them they can play nearly a dozen instruments and have impressive music skills.  Arshia, who was instrumental in forming the group, keeps the beat going, occasionally plays the guitar and percussion, and provides much needed balance to the mix.

Within a few minutes of speaking to the guys in their Richmond Hill studio it becomes clear that Behnam, who studied musical composition at York University, is the backbone of the group.  He’s the musician, lyricist and composer that dreams-up the unique songs that have made Neemeha so popular in such a short time.

Although the guys were all involved in various projects independently as well as jointly prior to forming Neemeha, the group was officially established in 2009.

Speaking of the formation of Neemeha Behnam explains, “We were doing English work with musicians from here, but I felt that there was many empty spaces that could have been taken by us if we produced Farsi songs.”

Behnam’s instincts about filling a need in the niche Iranian market were right on.  The song Kook, which became synonymous with the pro-democracy movement in Iran following the 2009 fraudulent election, was the band’s first hit.  The sardonic lyrics are a playful ode to the resilience of the people of Iran, a people destined to persevere regardless of the oppression they face at the hands of the Islamic regime.

“It was a surprise to us,” admits Behnam, “Kook spoke to so many people, It was distributed on various websites, we didn’t even know who was circulating it.”

True to their experimental style, Kook was written in the 5/4 complex time signature, providing a song that seems almost schizophrenic at times.  Despite its complexity the various disparate elements of the song are weaved together, taking the listener on the journey through the sometimes-radical transitions, rather than leaving us behind.   This is experimental music created for the active listener, not cannibalized for the purpose of being avant-garde.

Explaining the music Behnam notes, “The rhythm was based on an additive rhythm, it’s something very unique to Iranian music.”

“We were experimenting,” adds Behnam, “We got results and decided to change our sound, get out of the hard guitar sound because the Metallica sound was overplayed.”

Since the release of their first album also titled Kook, Neemeha has steadily gained notoriety within the Iranian music scene, opening for big name acts such as Siavash Ghomeshi and Andy.

Neemeha has also been hosting a radio program, which has given Behnam an opportunity to showcase his musical knowledge through in-depth interviews with other musicians such as Mehdi Razania.

The concert was a testament to Neemeha’s ability not only to create innovative music but also to foster a community of like-minded artists from various musical backgrounds.  Strange Fruit managed to weave together disparate musical styles such as traditional Iranian sounds, with rock guitar and hip-hop influences, and classic western instruments, the result was a uniquely Tehranto experience that energized the masses.

The collaborators of Strange Fruit are working jointly to submit a proposal to Tirgan Festival at Harbourfront this July.  With thousands of local fans the proposed concert is sure to be a highlight at the summer arts festival.

Since the release of Kook the band has been busy at work fine-tuning their sound.

Speaking of the evolution of their work, Behnam notes, “One thing that happened is that we decided that Behrouz should sing more.”  As a result Neemeha’s newest released songs Asheghooneh and Yaad-e-to are primarily sung by Behrouz, a move that has made a tremendous impact on the strength of the pieces.

Currently, Neemeha is working on their second album.  Although, they won’t give away anything about what we can expect, they speak candidly about the aim of the group.

“Our ultimate aim is to produce music that both Iranian audiences as well as international audiences will enjoy.  We want to create music for the thinking person, pieces that are fun to listen to, but also require active listening, music that you can grow with,” explains Behnam.

To learn more about Neemeha visit their Facebook page https://www.facebook.com/neemeha?fref=ts