Sima Sahar Zerehi – The five hundred people strong crowd at North York’s Mel Lastman Square was electrified with a sense of urgency with most participants sporting renewed looks of determination and defiance.  Entire families had filed into the windy square on a cold winter Sunday, young parents with their kids, senior citizens bundled up in extra layers, and militant university students clad in green cloth.

Something was happening and we were somehow a part of it.  What had passed in Tunisia and Egypt had started in Iran, and now it was time for Tehran to rise up like Tahrir and so Tehranto was going to take a stand. 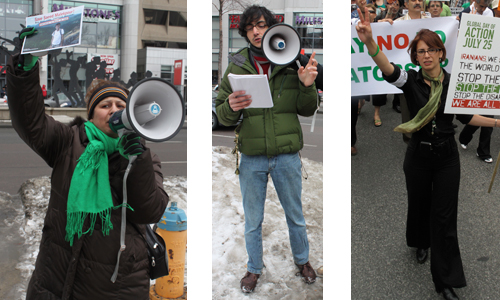 It was a sign; Egypt’s Mubarak had fallen on February 11th, could this mean that Iran was next?

For our community February 11th, better known as 22 Bahman marks the anniversary of the failed 1979 Iranian revolution.  Those of us who are in our late twenties or early thirties grew up as the children of the revolution.

We were raised with the legacy of our parents’ quashed dream for a more democratic Iran, put to bed with cautionary tails of a coopted struggle for liberation, serenaded with revolutionary songs, and indoctrinated with a dream for a free Iran.

This desire for redemption after a lost revolution, for unrealized dreams of a better world, is not only shared by Iranian youth but all youth from the Middle East.  Whether in Iran, Tunisia, Egypt, Yemen, Bahrain, Algeria, or Libya, for over thirty years, Arab, Middle Eastern and African youth have gone to bed dreaming of a better country.

On February 11th the youth of Egypt made the impossible, possible.  For the first time CNN was broadcasting almost incongruous images of victorious, jubilant and triumphant Arab youth.  Tahrir square became a symbol of what is feasible in the Middle East when our people channel the energy, creativity and ingenuity of our youth in strategic and measured ways.

But for Iran, Egypt was a call to arms.

Egyptian cyber activist Wael Ghonim perhaps best articulated the connection between the movement in Egypt and Iran in his now famous message to our people on the eve before the February 14th (۲۲ Bahman) demonstrations.

He said, “I would tell Iranians to learn from the Egyptians, as we have learned from you guys, that at the end of the day with the power of people, we can do whatever we want to do. If we unite our goals, if we believe, then all our dreams can come true.”

It was clear that the pro-democracy movement in Iran had been re-awakened from its fitful sleep, although the nightmarish images of the post June 2009 imprisonments, torture, rapes and executions were not yet erased, Iranian youth were going to risk life and limb by taking over the streets of Iran.

In Tehranto, the activists that had led the post 2009 solidarity demonstration in support of Iran were back on a mission.

On Sunday, February 13, on the eve of the planned demonstrations in Iran, Solidarity with the People of Iran called its first large demonstration in many months.

Nearly 500 people responded to the urgent call and gathered at 1pm at Mel Lastman Square to celebrate the victories in Tunisia and Egypt and to show their support for the upcoming demonstrations in Iran.

Shouting though a megaphone, Solidarity with the People of Iran founder and university student Pouya Alagheband, articulated the purpose for the gathering: “Today, we gather for two reasons:  first to celebrate the newly born freedom in Egypt and second to be the voice of people who are standing under persecution in Iran.”

Organizing a successful community demonstration on short notice would have been a difficult task in Tehranto prior to the development of Solidarity with the People of Iran.

Solidarity with the People of Iran began its work in Toronto in June 2009.  Organizers such as Leily Pourzand founded the group.  Pourzand who is in her thirties is a typical child of the Iranian revolution.

In speaking about her past she notes, “When I was three and a half, the revolution happened.  My childhood memories are intermingled with my experiences with prisons, executions, torture, and solitary confinement.  I can’t remember a single day of my life without having the name of a prisoner haunting me.”

Pourzand adds, “At the age 25 my mother and father’s names were on a list of people to be targeted by the of chain murderers, sadistic killers who were picking off prominent Iranian dissidents at the behest of the Islamic government.  I knew I was being watched, as a means of getting to my parents.  This is why I moved to Canada.”

Pourzand recounts how she joined others to start Solidarity with the People of Iran.  She says, “We started the group on June 13, 2009 when the election results in Iran were announced. All of us were desperate and on Facebook in search of news.  We were in shock, trying to hold back tears.  ”

She adds, “One of our friends Mehrdad Loghmani suggested on Facebook that maybe we should get together and think of an action.  That was the base of the group.  We got together at the University of Toronto. The result of that gathering was a group with no name but with an action in mind.  On June 14th within a few hours we organized an event that we promoted via Facebook and other social networking sites.  The rally was at Mel Lastman Square and despite the last minute notice a few hundred people showed up.”

According to Pourzand Solidarity with the People of Iran was started by Mehrdad Loghmani, Mehrdad Ariannejad, Mehrdad Hariri, Mohammad Tajdolati, Alidad Mafi Nezam, and Pouya Alagheband.  She notes, “in the beginning more people were involved but some later felt that they would prefer to remain anonymous in order to avoid possible targeting by the Iranian government.”

Pourzand explains that the basis of unity for the group was not shared political ideology.  She states, “The reason that we got together was not our political background.  Some members of the group had never been politically active or even socially active in the community prior to joining the group.”

Nasrin Khatam is one of people who only became an active community organizer after joining the group.  These days Khatam is a recognizable icon in Tehranto.  Brandishing her tell-tale green scarf, she can be seen megaphone-in-hand at the head of most pro-democracy demonstrations in Tehranto, passionately leading the crowd with chants.

Khatam chuckles as she recounts how people often ask, “Where were you before the June 2009 election,” she admits, “I was lost.  I was part of the first generation after the revolution.  I was quiet, the Green momentum moved me, I finally had hope and a renewed dream for the future of Iran.”

Although Khatam considers herself a Green, she does not necessarily see Iranian reformist Mehdi Karoubi or Mir-Hosein-Mousavi as the leaders of this movement.

Khatam states, “I don’t believe that they are the leaders of the Green movement.  I think they are the only people who can speak inside Iran as the voices of opposition.   The people of Iran are far ahead of Karoubi and Mousavi when it comes to their political demands.”

Khatam adds,  “The voices of the people chanting in the streets are not in sync with the statements issued by Mousavi and Karoubi.  The people of Iran don’t want the Wilayat-e Faqih (Guardianship of the Islamic Jurists).  These demands for fundamental change are not echoes of the voices of Karoubi and Mousavi.”

Championing the voices of people of Iran has been the main focus of Solidarity for the People of Iran.

Khatam explains the group’s basis of unity, “Our goal has been to be the voice of the people of Iran outside of Iran.”

Khatam explains, “In our group we don’t try to tell the people of Iran what to do, we simply want to pass the message of what’s happening in Iran to non-Iranians.  To this end we try to lobby the government on various Iran related issues.”

When it comes to the mandate of the group Pourzand concurs with Khatam, she adds, “The most important role that we have is to keep the voice of Iran loud.  Out job is to transfer the messages from the people of Iran to the mainstream media in Canada and non-Iranians. “

However, Pourzand admits that this has not always been possible.  She states, “We have been more successful in reaching the government than the mainstream media.”

She explains that with the renewed momentum in Iran this tasks becomes even more urgent.  She explains, “The difference between Tunisia, Egypt, Bahrain and Iran is that there are no professional journalist filming the demonstrations in Iran.”

She adds, “I admire the courage of the Iranian activists who are able to send video from their mobile phone and digital cameras.  When you compare what they are able to accomplish with so few resources, under so much risk and oppression it becomes even more pertinent for us here in Canada to sit and talk and find a solution for reaching the mainstream media in here.

Despite being self-critical the group has achieved many successes during its short existence.  Since its inception Solidarity with the people of Iran has mounted numerous rallies and actions to call attention to the struggles of the people in Iran, including a memorial tree-planting in memory of Neda and Sohrab two young people killed in the post-2009 election demonstrations in Iran, and a blood-drive registered with the Canadian Blood Services.

In speaking about their past actions Pourzand states, “In terms of our past successes, two events come to mind: first our initial rally at Queen’s Park.   The beauty of that event was the crowd.  It was one week after the election and every partisan group was there with their own agenda, it was overwhelming.  We had never organized an event with so much involvement from various political groups.  Naturally there was a great deal of tension.  There were fights over flags and what chants to use and what songs to sing, everyone had their own ideas and it was impossible to please the entire crowd.”

Pourzand continues, “The second event that comes to mind is another rally at Queen’s Park on July 25, 2009.  This time we knew ahead of time that we were going to organize such as event and we were able to plan ahead of time.  In the lead-up to the rally we organized numerous sit-downs with various members of the different political or social grouping in the community.”

Pourzand admits, “When we started holding these meetings with the various factions in the community, I was completely panicked.  I thought the session was going to end up in a fight so I didn’t attend the first meeting.  But to my surprise the talks were very positive and so we held other successive sessions with the leaders or active members of the different groups.  In this way we were able to hash out some compromises and plans of action before July 25th to avoid some of the chaos and confrontations that had taken place in previous demonstrations.”

She concludes, “From these sessions I realised that talking has a real effect.”

As Iranians across the world brace for a resurgence of the pro-democracy movement in Iran, groups like Solidarity with the People of Iran will have to do a great deal more talking and bridge building in order to be bale to offer the kind of support needed by the activists back home.