Sima Sahar Zerehi – If you want a mayor focused on the bottom line, Ford’s your man, unless of course that bottom line includes new immigrants.

In a meeting room crammed with representatives from the ethnic media, anchoring a large conference table littered with publications in dozens of different languages, Ford commenced his talk by discussing the City Councilors’ office budgets.

“I want to reduce the budget,” he proclaims, “when I’m mayor I’m going to say what is a legitimate office expense.”

Clearly in his element when speaking about dollars and cents, he adds, “I don’t mind postage and cartridge but when you look at pens, papers, we get all that for free, we go up to the clerk’s office and there’s a whole closet full of rulers, liquid paper, so really what are we getting down to here?” 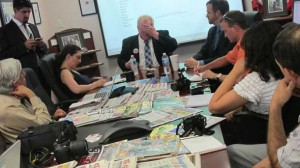 The issue of the Councilor’s office supply budget is near and dear to Ford’s business sensibility.  In fact, he devotes an entire section of his website to Council Expenses, diligently itemizing each member of City Council’s annual expenditures.

According to Ford, Toronto needs a businessman at the helm, and he wants to govern this city with the same guidelines he uses to run his family business.

While Ford is at ease when speaking at length about city expenditures, he quickly loses his poise when asked about immigration to the city.

Although, one would imagine that Ford who claims to live and die by the bottom line would welcome any endeavor that promises to stimulate the city’s economy, when asked about Toronto using immigration as economic stimulus, he begins to sweat.

“We can’t even take care of the 2.7 million people that we have in the city right now,” he protests.

If you take Ford’s word, new immigrants are to blame for a whole host of problems in Toronto, from wait times in hospitals to gridlock.

“When you look at traffic congestion, ten years ago it would take me maybe twenty minutes to get from downtown home, right now it takes me maybe an hour and it’s getting worse, worse and worse,” he maintains.

Although Ford admits that we can’t stop people from coming into this city, he insists, “we don’t have the room, we don’t have the infrastructure for another million people in the next ten years.”

When asked to comment on the fact that immigration has been a proven remedy to economic stagnation and that one of the largest groups of investors in Toronto’s growing real-estate market are immigrants of Iranian decent buying an unprecedented number of homes in the GTA, Ford simply shrugs.

He notes “in a perfect world, what I would like to do is get us from the red into the black, have a surplus, reduce our depth, have our finances under control, then I would say, great let’s welcome more people.”