Racists, Reformists and Revolutionaries: A Conversation with Yousef Azizi Benitorof

Sima Sahar Zerehi – For a few days, or few hours, depending on how engrossed you were in the events, the entire world was Tunisian, than Egyptian and now Libyan?

Youth from all over the region looked to the Middle East and thought that today is a good day to be Arab.

In Tehranto we also rallied in solidarity with the people of Iran, this time we were armed with new placards and slogans connecting the revolutions in Tunisia and Tahrir to the mobilizations in the streets of Tehran. 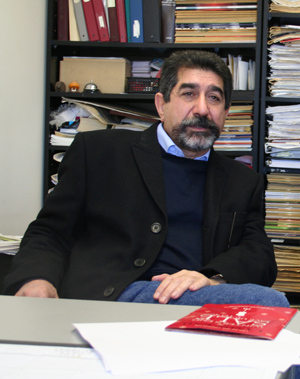 It seemed that for a brief moment historical fissured between Iranians and Arabs were set aside as Iranian youth and Arab youth were united in their struggle for democracy against tyrannical dictators.

I even received a Facebook message from a young Iranian looking for contacts in Egypt to do an interview for a student publication.

Sure for those of you who are Canadian, American, or European, this unity between Iranians and the Arab world seems natural.  After all, EYE-RAN, EYE-RAQ what’s the diff right?

But for Iranians we have the Iran/Iraq war, the Sunni/Shia divide, and the legacy of the Arab invasions in the sixth century.  We hold a grudge.

But all that seemed ancient history as Iranian youth in Toronto enthusiastically chanted slogans of solidarity with Tunisia and Egypt.

And then it happed, a middle-aged man, in his fifties or sixties perhaps, waving an Iranian flag from day’s gone by, chanted:  “Nasl-e man Aria, Din az Siasat Joda.” Which loosely translates to “My Origin is Arian, Religion and Politics must be separated.”

Now you have to know a thing or two about Iranians to understand the impact of this slogan.  The second part about separating religion from politics was a no brainer; we were all in support of that.  But the first part . . .

You see for the outsider, it’s easy to see Iranians in Tehranto as a monolithic bunch.

To the untrained Westernized eye we all look and sound fairy similar, a nondescript brown crowd of prominent noses and arched brows.

It’s only when you look closer, when you become an insider that you start seeing the fractures, fragments and factions in the community.

When you know the language you can discern the various accents and intonations, and that’s were the discrimination and racism begins.

The slogan was a reference to the idea of Iran as a community of Arians, which deliberately excludes Iranian-Arabs, Iranian-Turkemans, Iranian-Kurds, Iranian-Azari’s, and Iranian-Baluchs to name a few.

In short the chant was asking for an Iran that did not include over thirty five percent of its population.

According to Yousef Azizi Benitorof an Arab-Iranian writer and journalist and the Chairman of the Centre for Combatting Racism and Discrimination against Arabs, it is this intolerance towards various nationalities in Iran that has prevented the Green movement from overthrowing the Islamic regime.

Azizi Benitorof explains, “Iran has various nationalities, in addition to the Persian population we have Turks, Arab, Baluch, Lurs, and Turkemans.  A democratic movement in Iran will have its own unique challenges.”

According to Azizi Benitorof there are two simultaneous movements growing in Iran.  He notes, “One movement is the Green movement which is alive in places like Tehran, Esfahan and Shiraz, the Persian regions of Iran.”

He continues, “There’s also a movement of the non-Persian nationalities that is alive beside this Green movement, this is an anti-racist movement, a movement for linguistic rights and equality.”

Azizi Benitorof adds, “These two movements are moving side by side and they are engaged in a dialogue but they have not yet become united.”

He quickly adds, “This does not mean that there are no non Persians in the Green movement, but they are a minority.”

He explains, “As the minority rights leaders we refuse to fight alongside the majority Persian population again without having our rights acknowledge.”

He adds, “We refuse to participate in your movement without having our conditions met.  The leaders of the Green movement must announce that minority rights would be included in their vision for a new Iran.  They must accept federalism as part of their platform.”

“People like me and others from Turk, and Kurdish communities would write and publish on the internet and active members of the Green movement would read our pieces.  Similarly, we would closely follow all the major statements issued by the Green movement,” recounts Azizi Benitorof.

Despite the limitations in the dialogue between the two movements for change in Iran, Azizi Benitorof believes that real change is inevitable.  He notes, “There are two possibilities.  One that Karoubi and Mousavi, the figureheads of Iran’s Green movement will confirm and echo the demands of the people on the ground or if they don’t a new seed will emerge from the heart of the movement like Tunisia and Egypt.”

Azizi Benitorof sees the trajectory of the recent revolutions in the Middle East as a possible blueprint for Iran.  He states, “Tunisia and Egypt seem to be classic examples of revolutions.  In both cases faced with an oppressive government that failed to represent the people and an ineffectual opposition that seemed to at best be flirting with the regime, a third force emerged from within.”

Azizi Benitorof expands, “The various parties, the Marxists, Liberals, Islamists were all unable to bring about any real change in Egypt, and therefore a new power emerged, the new youth movement.”

Azizi Benitorof remains extremely hopeful about the future for a democratic movement in Iran.  He notes, “No power can stand against this pro-democracy movement.  In the recent past we’ve seen two regimes in Tunisia and Egypt collapse. Now we are seeing how Libya, a dictatorship that we thought would not budge, be shaken to its core.  In Morocco, Yemen, Bahrain the calls for democracy are boiling over.”

According to Azizi Benitorof, “Iran is the closest country to these Arabic nations.  It is very similar and there is a dialectical relationship between Iran and the Arab world.”

Azizi Benitorof ends by stating, “The revolutions in Tunisia and Egypt have given new potential to the revolutionary momentum in Iran. Now we can see that the youth are paying particular attention to the revolutions in Yemen, Tunisia, and Bahrain.  Among these youth in Iran is a population of four to five million Arabs in Ahvaz who watch Al Jazeera twenty-four hours a day and celebrate the gains of the pro-democracy movement in the Middle East.”