Sima Sahar Zerehi – It was hard not to feel jealous growing up next to such a high maintenance sibling; he was the prototypical baby of the family.  Always monopolizing my parents’ time and energy.  Holidays, family outings, birthdays would all be compromised to accommodate his needs.

Baby brother was a spoiled child who had a knack for creating drama; he would spin our lives into muddled messes in order to place himself at the centre of the family’s attention. 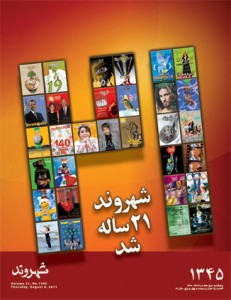 My sister and I were always resentful of this obtrusive late addition to our clan, why did mom and dad have to grow our family at this stage, after years of migration and family separation, when we were finally normalizing our lives? Weren’t two daughters enough for them?

We begrudged the time that our parents would devote to little bro, the fact that after a day consumed by his needs my parents would be left like empty shells, exhausted with very little energy to focus on their two oldest children.

For years, my sister and I would secretly plot to undermine little brother’s hold on ma and pa; we would try to outshine him with our achievements, out-do him with our tantrums, minimize him with our mood swings, only to be undone by the expert antics of an overbearing younger sibling who always knew just what to do to captivate my parents.

The years passed by, my sister and I left for university, picking a school on the other side of the country to get away from our youngest sibling, but no matter how far we went our brother’s shadow followed us.

You see, while our brother was a baby to us, he had become an icon to the community that had helped raise him.

He had made a name for himself, had established a role as a mediator, an organizer, a reporter, a writer, an editor.  Within himself he housed the history of the Toronto Iranian community, his pages contained the chronicles of the lives, achievements, and struggles of a people that had worked hard to build roots in a new land.

My brother has learned to be more democratic, to be able to argue two divergent perspectives of one debate, he has learned to think politically, act communally, and perform artistically.

While, a part of me still lingers in his looming shadow, I now consider standing by his side an honour for he represents the best of my family; our highest potentials and our grandest hopes.  I look forward to seeing him transition into the next phase of his life, I’m eager to see what paths he’ll choose, I look forward to seeing what ideas will occupy his blank pages, what campaigns will take up his time, what causes will captivate his heart and what notions will ignite his imagination.