Sima Sahar Zerehi – “Don’t forget to get rid of the Greek passport on the plane before landing in Canada, Just go to the bathroom and tear it into pieces and flush it down,” whispered the smuggler urgently to my mom the night before we left Rome for Toronto.

Ours was a typical story; the kind that all immigrant families share when they first meet, speaking in shorthand about the much travelled routes from our homeland to our new found homes.

Like many others my family was separated in the process of migration from Iran to Canada.  My father, who had received a viable threat to his life and freedom, was the first to leave, smuggling himself to Dubai and making his way to the United States. 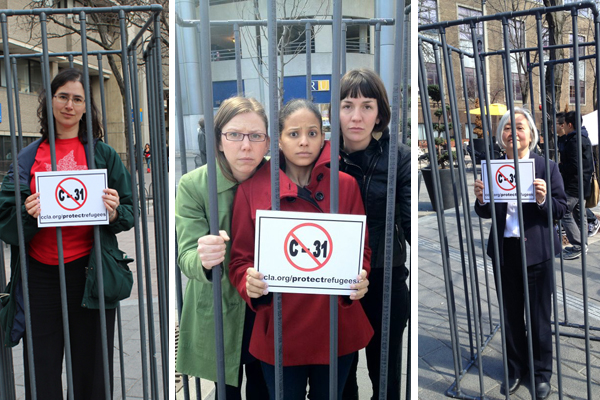 My sister, my mom and I tried to follow but since we were very young my mom opted for a safer journey via Turkey where we hoped to apply for immigration status to the United States.  Once our application for permanently residency was rejected we had no choice but to turn to smugglers for help.

It took a few attempts, a lot of money, moving to Rome, and four and a half years of separation before we finally secured a workable plan to be reunited with my dad who had made his way from the US to Canada.

We arrived at Pearson airport on the same flight as another refugee family (a woman and her teenage daughter also from Iran).  The smuggler who had helped us, was also assisting two other families to come to Canada as asylum seekers, they were en route scheduled to arrive shortly behind us.

All of us were families who faced persecution, imprisonment, torture or death if returned to Iran.  Some like my parents had artistic, literary and political backgrounds, others were from minority religious groups.  None of us would have left our homes and lives if we had a choice.

These days it’s easy for me to forget that I was a refugee.  With a Canadian passport in hand I can travel anywhere in the world. While I walk the streets of Toronto I feel secure in the knowledge that I have a wallet full of legitimate IDs: a health card, drivers license, social insurance card, citizenship card, documentation that speaks to my legitimacy as a Canadian citizen.

I’m no longer looking over my shoulder for fear of being spotted by an officer who may ask for my papers.

Yet, once a year, on April fourth, Refugee Rights Day in Canada, I ritualistically sit down and think about the journey that led my family and I here.

April 4, 1985 is the day that the Supreme Court of Canada ruled that the Canadian Charter of Rights and Freedoms protects the right of refugee claimants in Canada to life, liberty and security of the person.  Following this decision refugee claimants were finally entitled to an oral hearing, in accordance with the principles of fundamental justice and international law. This decision is referred to as the Singh decision.

Since the Singh decision, Canada’s refugee system has been modernized to include an independent, specialized tribunal called the Immigration and Refugee Board, that is empowered to make decisions on refugee claims following oral hearings.  In addition, Canadian courts have recognized in subsequent decisions that the Canadian Charter of Rights and Freedoms protects people from deportation to persecution.

The refugee system that allowed my family and I to come to Canada and build a life here is once again under serious threat.  In fact, under the proposed legislation my family and I would be treated more like criminals than asylum seekers in need of protection.

On February 16, 2012 the federal government introduced Bill C-31 a set of new, even tougher reforms to refugee legislation.

These reforms are being pushed through before June 29, the date on which the earlier legislation is scheduled to come into effect.

The Bill’s hardline approach has already attracted the attention of refugee rights groups, legal professionals as well as human rights organizations who are all calling for an overhaul of the proposed legislation.

The Canadian Council for Refugees states: “the bill would create a two-tier system of refugee protection in Canada. It makes refugee protection in Canada dangerously vulnerable to political whims, rather than ensuring a fair and independent decision about who is a refugee. It also includes costly measures to detain refugee claimants and to revoke the status of refugees who are now permanent residents.”

Some of the controversial elements of Bill C-31 include measures such as subjecting people who apply for visas to visit Canada to biometric identification including fingerprints and photos.

The Bill also gives the immigration minister power to select which countries are placed on a safe list without the input of a committee of experts.

According to Gloria Nafziger, the Refugee, Migrants and Country Campaigner for Amnesty International Toronto, this concept of designating certain countries as safe is problematic.

She states, “The designated country of origin is a very dangerous concept.  The minister’s ability to be able to designate the criteria as being safe countries is very problematic.  Amnesty doesn’t believe that its helpful in refugee determination to discriminate against refugees according to which country they’ve come from, each claim needs to be reviewed on its own merits, the process of contributing human rights criteria to one country over another poses significant risks.”

The Canadian Association of Refugee Lawyers, an organization that represents legal professionals across Canada echoed the sentiments expressed by Amnesty noting in a statement, “The designated ‘safe’ country list, and the Minister’s unilateral power to list countries, dangerously politicizes the refugee system.”

“The Minister need not justify why he deems a country safe, nor does he have to take account of the differential risk faced by certain minorities in a country that is ‘safe’ for others,” they added.

According to Nafziger, “Some of the most draconian elements of the bill are cracking down on people who use smugglers to come to Canada.  These refugees can be placed in detention for one year without review.”

A statement by the Canadian Council for Refugees explains that in addition to humanitarian concerns there are also fiscal concerns to consider when implementing a measure to jail refugees.

“The cost of keeping an individual refugee claimant in detention for a single day is around $200. For a single year, that amounts to over $70,000 per person,” they itemize.

CCR also points out the other cots of prolonged detention, “Recent research has demonstrated the heavy, long-term mental health costs of detaining refugee claimants in Canada.”

“Another fundamental right is the right to have the reasons for your detention being reviewed promptly, what this bill does is take away that right for one year. That is a violation of Canada’s Charter and Canada’s obligations under international conventions.”

Nafziger adds, “We need to speak out when there’s a violation of human rights when it happens in Canada and when it happens in Iran and we need to ensure that the laws that we have do the best job as possible to protect the people who are vulnerable.”

This omnibus bill rolls together proposed anti-smuggling Bill C-4, the current refugee system, and the future refugee system, as well as additional new elements, including the use of biometrics

Refugees will only have 15 days to deliver a written version of their history, and 15 days to present an appeal

Refugee claimants who are put on a designated safe country list are subjected to even shorter deadlines to submit a written claim, and will not have access to an appeal

Claimants from countries on the safe country list would have to wait a full year to apply for humanitarian and compassionate consideration to become permanent residents, which would take into account issues of personal hardship. In the interim, they could be deported

Some refugee claimants, including some minors, could be detained, without review for a minimum of one year