Sima Sahar Zerehi – She’s fierce on stage, cutting words and razor sharp wit, she dominates.  Needless to say I was a bit daunted to meet her. Rappers are cool and spoken word artists don’t mince words, and I was feeling particularly geeky wielding my laptop and iPad to my favourite underground coffee shop.

I was ready for a larger than life presence, for the voice that spits out biting commentary about what it means to be a lesbian in Iran, I was ready for attitude, anger, maybe even an entourage, but what I got was a stripped down Saye Sky. 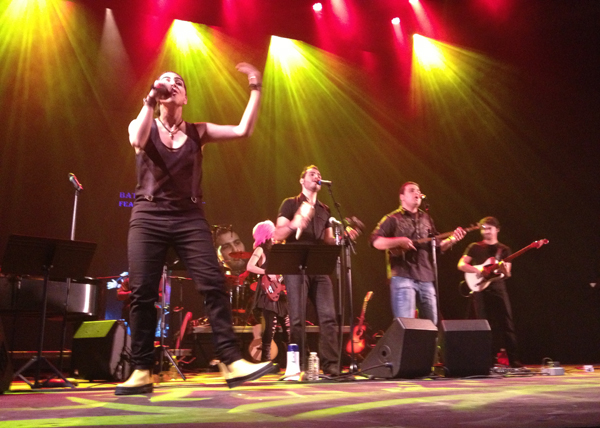 It took me a second to reconcile this flannel-clad young figure, free of makeup, hair-pulled into a wool hat, with the rapper I saw on stage at the Strange Fruit Concert a month ago.  In person Saye Sky is surprisingly down to earth, she’s open and friendly, which doesn’t mean she lacks her trademark wit.

Despite the fact that she has only released three songs via YouTube and has yet to produce an album or a single video, Saye Sky has already made a name for herself in the Iranian music scene.   Her first song ‘Saye Yek Zane Irani’ (the Shadow of an Iranian Woman) was recorded in 2009 after the Iranian election.

Although Saye was already plugged into the underground music scene in Iran as a backup singer for a few bands, she had difficulty finding a studio willing to record her piece.

“I had written the song, it was my response to the movement that sprung up in Iran after the elections, it was my way of declaring my voice as a woman and as a lesbian, and many people would outright reject it because of what it was about,” recounts Saye.

“Many said it was anti-men, I would respond it’s not against every man, it’s against men who trample on women’s rights.”

Scrunching her face as though tasting something bitter, she explains, “I was frustrated because if you listen to all the music released there’s so many songs of men bashing women.  My song is not about lesbians hating men, it comes from a frustration over a society that’s against women and women’s rights, and still people were hesitant to record it.”

“When I say men is dirty and deceiving it’s about my own experiences dealing with those recording studios In Iran, and how they treated me during that time,” says Saye.

Despite the obstacles Saye’s first song was finally recorded, “we had to be really careful because it was really dangerous for both the studio as well as for me to be caught recording this kind of song in Iran, I had to show up after hours and make sure that no one saw me coming in.”

With the help of a girlfriend who was travelling to Vancouver from Tehran, Saye was able to upload her song on YouTube accompanied with an almost unrecognizable picture of her sporting blond hair and over sized shades.

“All I wanted to do was get my song out there, I didn’t really know what was going to happen after that,” admits Saye.

Despite Saye’s low expectations, she became a YouTube sensation among the Iranian community inside and outside of Iran, circulating via social networking tools from listener to listener.

“One day I get a call from my girlfriend in Vancouver and she says a radio station in the Netherlands wants to interview you,” that was the first time I realized that my song had become popular online.

Soon Saye’s song was playing on various Iranian radio and television programs outside of Iran.

To date ‘Saye Yek Zane Irani’ has over 33,950 hits with new listeners being added to the list on a daily basis.

Although Saye’s had reached her audience, she knew that her work was far from over, to pursue her love for music and spoken word as an openly lesbian woman she had to reinvent herself and cut all ties with her past.

“I have no relationship with my family,” asserts Saye.  “They don’t know about my involvement with the pro-democracy movement in Iran.  I told them I was going to the North for a few days and left. They are very conservative; they go their own way and I go my own way.”

For a minute she has a faraway look on her eyes but soon she refocuses and looks directly at me as she sates, “I always knew I came to the world for a reason, I always felt that I shouldn’t be dependent on anything.”

“I was a really nerdy kid who won prizes in science. One day I decided this isn’t a life for me, this isn’t the reason I was born. I was like a soldier who had been isolated from the infantry and needed to prepare for a hard solitary journey ahead. I gathered all my childhood photos and I put them in a garbage bin and set them on fire, there was this one photo of me at age two with a shaved head holding a toy sword. I loved that picture and it was hard to let go, I burned that one last,” recounts Saye.

The song talks about the agony of living in a world where the trans community is not accepted with lines like, “A pair of teary eyes stares at the police, why? Cuz a trans doesn’t have the right to exist.”

The YouTube release of Saye’s third song ‘Bidari‘ in the fall of 2010 about the reality of living in Iran as a lesbian solidified her presence as one of Iran’s emerging rap artists.

“This song blew up, I had over 30 interviews with various media outlets.”

When I ask Saye about the goal that motivated her to leave her home and family she doesn’t hesitate before asserting, “The goal is positive change, equality, safety. The goal is humanity.  Some people will read this and say these are all slogans, but I’m not about slogans, I’m about action.”

Her public profile tremendously helped Saye when she was making a claim as a UN Convention refugee in Turkey. “When I came in for my interview they already had a huge file on me with links and articles they had found online about my work.  I didn’t have to explain my situation to them, they knew about me.” explains Saye.

When presented with a choice of three countries to relocate to; Germany, United States and Canada, Saye immediately chose Canada.

“My case worker was surprised that I picked Canada, she said that people in Los Angeles had written letters to support me and my work and that they had said that my music would be supported there, but I didn’t want to be part of the Tehrangeles scene, I picked Canada,” explains Saye.

Since her arrival in Canada in 2011 Saye has been actively pursuing her music, performing at events at the Pride Parade and plugging into the Toronto music scene.  She’s written a number of new songs dealing with issues such as child labour, women’s rights and the sociopolitical situation in Iran, but she’s also composed a few steamy love songs.

Although she raps in Farsi, Saye refuses to limit her work to Iranian circles.  She is constantly taking risks and making new connections.

“Because I’ve come out of that situation of censorship and I can now say what I really want, I feel a greater sense of responsibility, because now I’m free.”