Sima Sahar Zerehi – It was an anti-climactic evening for Torontonians ready to catch the excitement of an election night with promises of nail-biting countdowns and close races.

The anticipation ended almost as soon as it began; within a few minutes of the polls closing at 8pm CityTV had already declared Rob Ford as Toronto’s new mayor.

The Smitherman and Pantalone gatherings were somber affairs caught off guard by the shock of the early and decisive results.  Purple clad Smitherman volunteers were dejected and distraught, while stunned green-clad Pantalone supporters looked incredulously at the television screens.

In his concession speech a humbled George Smitherman chocked back tears as he stated, “it will be written that I lost an election that was mine to win.”

A more upbeat Joe Pantalone delivered a message to continue the fight, he stated, “we will continue to build a better city despite the little twists and turns in the road.” 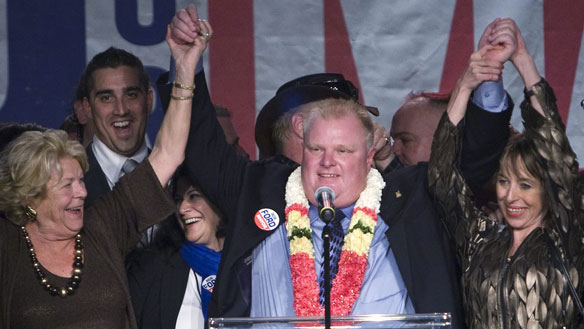 Toronto, our progressive, cosmopolitan and diverse city had chosen Rob Ford as its mayor with a mandate delivered by a record number of voters inspired to take to the ballot box with the mayor-elect’s singular message of “Stopping the Gravy train at City Hall.”

With the final result of the mayoral race determined early in the night, stunned radio and television reporters scrambled to fill airtime with commentary from the media weary Ford camp.  Ford’s team played coy with visibly frustrated reporters who were clearly receiving the cold shoulder after months of critical coverage.

A tweet from @nowtoronto the official account for Toronto’s Now Magazine most aptly captured the sentiment of much of the media.  The message on the popular social media network read, “Got screamed at trying to enter Ford HQ, forced to fill out supporter form or no entry, yelled at, signed in as M Hater, church goer.”

Some commentary on Twitter attempted to capture the magnitude of the Ford victory.   A post by David Michael Lamb, Senior Producer of CBC Radio’s World Report @arcticlamb noted, “Rob Ford has received more votes than David Miller did in either of his victories.”

Other tweeters took the opportunity to reflect on a more global perspective. Mike Ferrier @mferrier, a web developer, compared Ford’s mayoral victory to George Bush’s Presidential victory in the United States.  He wrote, “Nobody in Toronto can ever make fun of the US electing Bush ever again.”

John Papamarko, @johnpapa, a freelance rock writer and photographer from Toronto, authored one of the most widely posted tweets regarding the election, he wrote, “Can we PLEASE refer to Rob Ford as ‘Mayor Double Down’? He’s greasy, filled w/ cheese and generally bad for the health of the city.”

Torontonian and music lover, Jason Hughes,  @JasonJHughes used a popular music analogy in reference to the Ford victory.  He tweeted, “Rob Ford is the Nickelback of Mayors. All the votes, yet no one admits to voting for him.”

Federal Minister of Immigration Jason Kenney used this opportunity to gloat about the Conservative victory.  From his official account @MinJK he posted, “Congratulations to Toronto Mayor-elect Rob Ford. According to recent polls, he had a 20-point lead amongst foreign-born Torontonians.”

It was painfully clear from the diverse faces in the three thousand people strong crowd at the Ford celebration party in Etobicoke that his victory was indeed tied to his ability to mobilize the immigrant and suburban vote.

The communities left out of the Toronto centered political domain were the ones who took to the polls, galvanized by Ford’s angry call for change.

Other voices on twitter echoed Jason Kenney’s message regarding Ford’s popularity amongst newcomer communities.  University of Toronto student, Luke Albert, @LukeAlbert, tweeted “Ford got 51% of the support of ppl. born outside Canada. Smithy got 30%, so actually, he DOES rep. this unique city.”

As Kenney noted, it seemed evident that immigrant communities who took to the polls in opposition to the Miller regime were more interested in Ford’s call for fiscal responsibility than concerns over choosing a candidate that repeatedly took an anti-immigrant position.   Let us not forget that unfortunately, many new immigrants also chose Ford because of their refusal to align themselves with a candidate from the gay community.

Joe O’Neill @Quillspiller spoke to issue of the ethnic vote securing Ford’s victory.  He made a reference to former Quebec Premiere Jacques Parizeau remembered for his anti-immigrant policies.  He stated, “Maybe the natural ruling class of T.O. should fly in Jacques Parizeau’s kid to blame the defeat on ‘money and the ethnic vote.’”

Speaking on gaining the immigrant vote Nate Tang from North York, @natetang, posted the following comment, “۱ & only 1 reason Ford won: it’s not about policy or likability but because TO Suburbanites are pissed. Period.”

Tang’s tweet is one of the few posts that speaks to the anger and frustration that led alienated suburbanites to the polls in support of Ford, not surprisingly this population is often absent in conversations that occur on social networking sites, a conversation dominated by the same Toronto elites who were left stunned after this week’s election results.

Designer and photographer Jackie Beale from Toronto, @jacbeale posed a question that captured the sentiments of many Torontonians, she asked “Does the 905 vote in your world?” Appropriately, her post was marked with the hash tag  “#dazedandconfusedliberals.”

The conversation online regarding Ford’s recent mayoral victory continues, and outspoken Torontonians and politicos will be posting minutely in response to the mayor-elect’s first steps in City Hall using the hash tags #voteTO, and #robford.

Some tweeters are already pointing out the inconsistencies in Ford’s election promises, Justin Kozuch, @jkozuch, in reference to the National Post article titled ‘Certain streetcars are here to stay, says Doug Ford, councillor-elect’ writes, “Ugh. First it was all streetcars, then it was no streetcars, now it’s some streetcars. WHICH ONE IS IT, FORD?”

Other are beginning to evaluate the outcome of Ford’s victory for those who oppose his policies, a young graduate student and writer Ronak Gee, @ronakgee, posted, “optimistically, i think that the next four years will really politicize people.”

It is true that Ford’s win is a decisive gain for Conservatives in Canada.  His ties to the Conservatives can be easily discerned through the list of politicians who showed-up at his post election victory party.  Former Conservative Ontario Premier Mike Harris, as well as federal finance minister Jim Flaherty were both present in Etobicoke to celebrate his victory. Ford’s allegiance to the Conservative principles of cuts to social programs and attacks on unionized jobs could likely spark unprecedented levels of public unrest as seen during the Harris years.

But in my opinion, Andrew Brett, @andrewbrett, a contributor to the progressive online magazine Rabble.ca wrote the message most in tune with the sentiments of Toronto’s Liberal-left. He tweeted, “Carpool to Calgary, anyone?” A reference to Naheed Nenshi, Calgary’s progressive mayor elected in a landslide victory this past week. 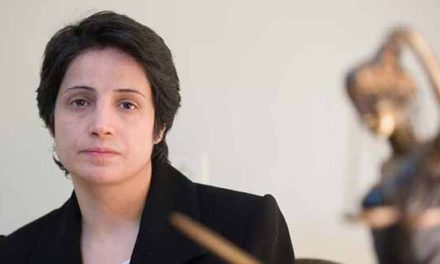