Sima Sahar Zerehi – The entire auditorium was holding its breath, eyes glued to the screen, hands clenched, our frenzied thoughts of panic kept in check by the rhythmic vibration of our pounding heartbeats – the scene was electrifying in its simplicity.

For a few long minutes Good Bye’s (Be Omid-e Didar) director Mohammad Rasoulof manages to suspend us like trapped prey in a claustrophobic elevator with the film’s protagonist Noora (Leila Zare) and two menacing plain-clothes agents in search of clues to the whereabouts of her journalist husband. The atmosphere was so thick with tension that as audience members we were almost  able to feel our captors’ sticky breath on our sweaty skin. 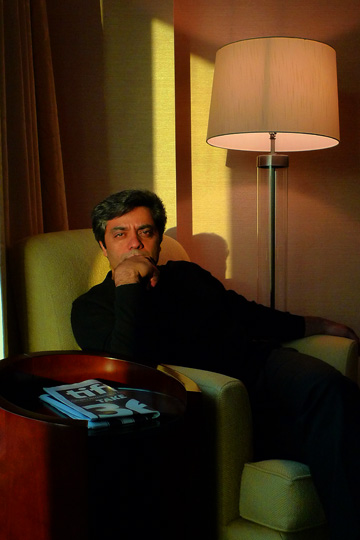 Rasoulof offers no easy escape, no background music interjects to relieve us from the palpable realism of the mounting fear and the camera stubbornly lingers in the cramped space allowing us to feel every moment of the intensifying tension.

This scene and the sequence that follows speak to the success of director Mohammad Rasoulof’s film about Noora a Tehran-based human right’s lawyer unable to practice law because of her journalist husband’s politicised writing.

In a pallet of cool blues and detached grey’s Rasoulof offers an unromantic portrayal of a desperate, isolated and calculating woman in search of escape from the country that has become her jail.

With Good Bye Rasoulof makes an about face from his first film featured at the Toronto International Film Festival in 2005, turning away from the sundrenched, cramped and social spaces of Iron Island, to the solitary blue and grey spaces of a woman’s private purgatory.

Despite its long uninterrupted sequences that offer few cuts to relieve the viewer from monotony and the drawn out uncomfortable silences, Rasoulof manages to create a film that showcases the underlying violence in a world of censorship and political repression.

In speaking about the film, Rasoulof states, “I was thinking a great deal about how to show a kind of violence that is prevalent in this society but is not a physical kind of violence.”

He adds, “I wanted to show how violence can have an impact on people even when it does not have a physically manifestation.”

In Good Bye, the possibility of violence is palpable, coursing throughout the film with the terrifying intensity of white noise.  Yet Noora is a woman who has grown accustomed to this atmosphere of fear.  Her world has made her hard, cold, and calculating.

Notwithstanding the fact that she is pregnant and her husband is in hiding from the authorities, she is not consumed by emotions, in contrast she acts with a singularity of purpose and clarity of thought entirely devoid of sentimentalism. In a world of lies Noora has become adept to the art of concealing the truth, she is a survivor.

Rasoulof offers insight into his protagonist, “I believe that what sets this character apart from others is the fact that she has developed a profound lack of trust, she hides everything from everyone, and continues her plans in secret, even in her relationship with her husband there is concealment, there are things that she hides from him and things that he hides from her.”

“The dualities in their relationship which stems from lack of trust are at the centre of the world I wanted to showcase,” notes Rasoulof

“I wanted to show how people are alone under such conditions, these are relationships that don’t pan out in any way – people are talking to each other but they are not connecting,” states Rasoulof.

“What was very important for me to portray was the fact that people are moving in a space in this film that is plagued with suspicion and lack of trust and it was vital for me to look into the roots of where this is stemming from,” explains Rasoulof.

He adds, “In the background of the film I wanted to show where this lack of trust and where this violence comes from.”

Ultimately, on a shoestring budget, armed with a skeletal crew, and unpaid actors, Rasoulof makes a film that masterfully portrays how people can lose their most basic human sensibilities of empathy and compassion when subjected to live under the burden of censorship and oppression.

While on the surface Good Bye’s pace seems sluggish, dwelling on long silent sequences, the underlying psycho-socio-political drama of the film keeps the audience on pins and needles until the stunning ending which shakes us to the core.

On December 20, 2010, the Iranian government sentenced Rasoulof to six years in prison on charges of “assembly, collusion, and propagandizing against the regime.”

To date Good Bye has not secured the right to screen inside Iran.