Sima Sahar Zerehi – “I’m independent, with no money, I have one staff member to support my work and I’m only funded for two trips of 14 days each to Iran to prepare my reports.   I’m given two reports per year, 10,700 words in each report, I have iron clad limitation” explains Dr. Ahmed Shaheed the UN Special Rapporteur on Iran to a small room of journalists and human rights activists in Toronto. 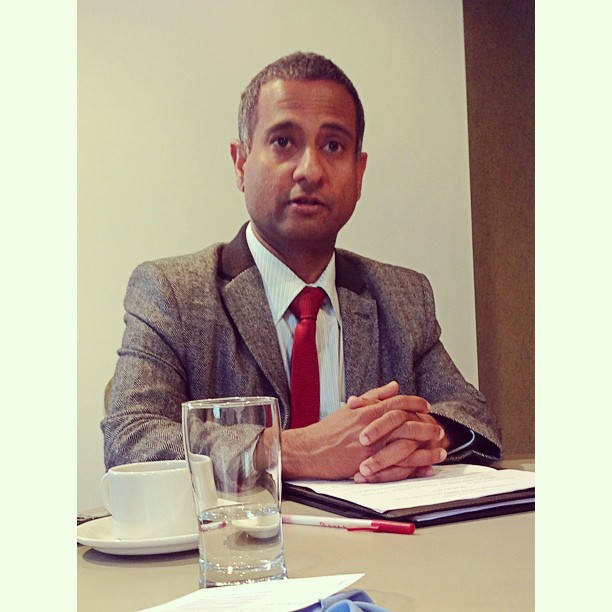 The United Nation’s Human Rights Council appointed Dr. Ahmed Shaheed to the office in June 2011 – he is the fourth Special Rapporteur to Iran.  His mandate is to simply report on the situation of human rights in the Islamic Republic.  To date he has submitted four reports to the United General Assembly and the Human Rights Council on the human rights situation in the country.

Within the 10,700 words allotted to him, Dr. Shaheed must condense all his analysis on the critical human rights situation in Iran as well as any recommendations for needed changes.  His most recent draft report issued in the spring includes sections on: human rights and human rights defenders, elections, freedom of expression, association, and assembly, torture, executions, women’s rights, ethnic minorities, religious minorities, lesbian, gay, bisexual and transgender community and socioeconomic rights.

Needless to say not all relevant cases can be mentioned and many key issues are only allotted cursory mention.

With a government with a lengthy record of human rights abuses such as the Islamic Republic of Iran, Dr. Shaheed is stretched to the limits.

In Toronto he’s bombarded with question after question about his reports on the human rights situation in the Islamic Republic.  He’s pressed on how he selects cases, and why he has focussed on some issues while seemingly giving others little attention. Unfazed, he calmly explains the limitations imposed on his work.

“The problems are so diverse in Iran, I tried to include all key areas of human rights concerns in my reports,” explains Dr. Shaheed.

When it comes to human rights work Dr. Shaheed is a veteran. He served as Foreign Minister of the Republic of Maldives from 2005 to 2007 and from 2008 to 2010, during which he led efforts to sign and ratify all nine International Human Rights Conventions; to implement them in law and practice; and to improve the country’s compliance with its UN Treaty Body reporting obligations.

In addition he worked to open the Permanent Mission of the Maldives in Geneva in 2006 to engage with the United Nations Human Rights Council; established a non-governmental human rights organisation in the Maldives; and worked as a member of the Presidential Commission to Investigate Corruption.

Currently, he is a visiting lecturer at the University of Essex in Colchester, England and at the City University of New York in the United States.

Commenting on the challenges of preparing his reports, Dr. Shaheed mentions the lack of transparency in Iran as a major issue when it comes to addressing the human rights situation.  He explains that he will only be satisfied when the government in Iran allows unfettered access for him to prepare his reports.

“I’ve interviewed over 500 people in preparation for my report, about 30% of the individuals I interviewed were inside Iran,” states Dr. Shaheed and adds, “the difficulty is accessing people outside of major cities such as Tehran.”

Dr. Shaheed explains that in order to ensure the accuracy of any testimonials he corroborates all stories with at least two independent sources.

“The lack of equality before the law comes from Iran’s interpretation of Sharia law.”

He notes, “There are countries in the Islamic world that have reformed Sharia law, for example by banning polygamy, Iran can change as well.”

Dr. Shaheed devotes a large part of his work to speak about the situation within Iran’s criminal justice system, particularly the widespread use of capital punishment.

“The range of capital crimes in Iran is quite shocking,” states Dr. Shaheed but notes that the challenges sometime arises from the Iranian regime’s refusal to accept certain truths.

As an example he explains, “Stoning in not a method of execution according to the Iranian government as the buried victim can theoretically get away.”

Other challenges include the Iranian regime’s refusal to adhere to their own national laws, “Iran does not at times observe it’s own laws in dealing with torture, access to lawyers, or duration of trials,” itemizes Dr. Shaheed citing cases were people were sentenced to death after a trial that only lasted a few minutes.

Another key issue that Dr. Shaheed outlines is the use of torture in Iran.  “Torture in Iran is systemic & widespread.”

“A study of self-reported torture victims in the period after the 2009 elections by the NGO Freedom From Torture found 23% of men and 60% of women were subjected to rape in prisons in Iran.”

“You can’t end torture until you end impunity to torture,” states Dr. Shaheed.

In his back-to-back meetings and speaking engagements in Toronto, including his talk at the Munk School of Global Affairs, Dr. Shaheed tries to mention the various groups and issues impacted by the Islamic Regime’s failure to adhere to international human rights standards.

Speaking quickly he mentions ethnic and religious minorities such as the Ahwazi Arabs in Iran and the Baha’i community as examples of groups that are targeted by the regime.  With individuals from the Ahwazi Arab community on death row in Iran for nothing more than engaging in cultural practices.

“Some Baha’i community members are charged with acts like writing to the President in Iran or the UN Secretary General and sent to jail for 20 years for these so-called crimes.”

On the topic of women’s rights Dr. Shaheed points out, “The highest posts in the country are still not open to women in Iran.”

In reference to the LGBTQ community, Dr. Shaheed questions the consistency of the Iranian regime, noting he is investigating whether “the state funds gender reassignment programs in Iran but the choice that individuals are faced with is execution or jail or changing their bodies sexually. Are these surgeries are conducted without administering hormone therapy to the individuals and without offering them counselling.”

Dr. Shaheed mentions that his next report on Iran will include greater depth regarding the LGBTQ communities.

Addressing the efficacy of such methods in creating real change in Iran, Dr. Shaheed explains, “The only thing that you can do to further issues internationally is naming and shaming, when there’s no campaign issues are forgotten.”

“The people I report on often tell me they feel comfort that their name is being mentioned.”

In urgent situations Dr. Shaheed mounts urgent calls to action, “I can write an urgent appeal like in cases of an impending execution, usually in coalition with other Rapporteur.”

“Iran is most mindful of its reputation within the international community,” states Dr. Shaheed.

“I think Iran remains very sensitive around criticism that comes from fact based grounds,” and adds, “Iran has to recognize that they can’t go on as they have when they see countries all around them falling.”

When questioned on the impact of his reports in achieving real change in Iran. Dr. Shaheed responds, “Even if each of my reports saves only one life I think that’s worthwhile.”

To learn more about Dr. Shaheed’s work or to read his reports visit http://www.shaheedoniran.org