Sima Sahar Zerehi – There’s an aesthetic that we’ve learned to associate with Iranian concert promotion.  Oversized glossy posters, crowded with texts and heavily airbrushed images of the artist looking twenty years younger than their current age, splattered with tacky colours and gaudy logos and headshots of real estate agents with bleached blond hair who have shelled out thousands to sponsor the event.

These outdated posters, which are visible from miles away, are plastered on the walls of grocery stores and shop windows, crowding the Iranian plazas as they compete for the attention of passers-by. 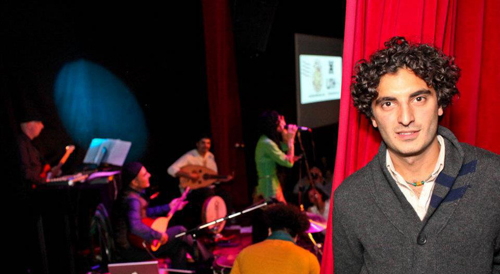 While the pop-concert aesthetic fostered by Los Angeles still dominates the landscape of the Iranian-Canadian music scene, a new breed of concert promotion championing different kinds of Iranian music and musicians, and catering to new audiences, has also emerged in Toronto.

Link Music Lab is one of the new music promotion companies that have surfaced in Toronto.  The boutique shop led by Artistic Director Mahmoud Schricker, a musician himself, is dedicated to assisting artists to raise their profile and build new audiences.

Unlike their Los Angeles inspired counterparts, Link Music Lab does not focus on Iranian pop and their concerts are not staged in suburban banquet halls.

“Really my fascination of Persian classical music is what led me into this industry,” admits Schricker, “I wanted to be able to help the artists in any way that I could.”

In the past three years the company has brought in a variety of diverse musicians ranging from Iranian underground rock band Hypernova, to Shanbehzadeh Ensemble, a trio performing music and dance from the southern Iranian province of Boushehr, to Mohammad Reza Shajarian a master of classical Iranian music.

Today Link Music Lab is an independent company with its own unique projects. However, Schricker started his work in concert and music promotion, long ago under the banner of Small World Music Society – a Toronto-based world music concert presenter established in 1997 under the direction of Founder and Executive Director, Alan Davis.

Schricker recounts how he met Allan Davis and begun his work in music promotion. “I’ve been doing this work since 2004, my first show was the Sima Bina concert.  I met Allan Davis from Small World Music backstage and I told him that I really appreciated what he was doing for the Iranian community.  I asked him if there was anything that he needed help with for the concert and he said he needed a rug for the stage.  So I brought him a rug and got a backstage pass to the show.”

Davis and Schricker immediately started collaborating on projects.  “Allan was interested in doing a fusion show and I introduced him to Niyaz,” explains Schricker, “That’s how we started to work together – back then no one knew who Niyaz was. We had to educate people – thank god for the Iranian community in Toronto because they usually support the artists and the show at Lula Lounge was a success.”

While the concerts were a success Schricker notes that at first it was hard earning an income through this work. “For the first seven to eight months there was no money involved,” states Schricker and adds, “It’s not a rewarding business in terms of the financial side but you get to meet a great deal of artists.”

After eight years in the industry and over 100 concerts Schricker has learned a great deal about music and concert promotion.

Speaking about his musical interests Schricker explains, “at the beginning I was only interested in traditional classical music from Iran but now I have gotten interested in fusion, and folk as well.  I like the stuff that fuses classical Persian music with something else.”

Schricker’s evolving taste in music can be reflected in the kind of shows he’s been promoting.

Speaking of his successes over the years Schricker points to the June 2006 show at Toronto’s Lula Lounge featuring a collaboration between Iranian musician and singer Reza Derakshani and The Doors drummer John Densmore.

“Music wise and audience wise this was a great show. We saw Lula Lounge fill up with an audience that was 50% Iranian and 50% non-Iranian,” states Schricker.  “For me a success is when you see crowds mingle and you don’t see just the Iranian community.”

Another success, according to Schricker, was the Winter Nowruz concert, also at Lula Louge on February 2008.  This was a fusion show featuring Soleyman Vaseghi and Wajma Soroor on vocals, Roozbeh Hariri on percussion, Amir Koushkani on Sitar, Alan Davis on drums, Neil Gardiner on Keyboards, Reza Moghaddas on bass, and Sina Salimi on santoor.

“The show was recorded by CBC Radio 2, the songs were listed on their website and the concert is still a top hit,” boasts Schricker.

Schricker also points to the sold out Shajarian concert at Roy Thompson Hall in June 2010 as a major success.  He says, “We sold out every single seat – that’s about 2,400 ticket buyers.”

While Schricker has had numerous successes he’s also faced his share of challenges.  “The 2011 Mahsa Vahdat & Mighty Sam McClain show didn’t go well,” admits Schricker. “People were not buying tickets so we changed to a smaller venue but last minute twenty extra people with tickets showed up to the door and we didn’t have enough seats for the over 250 people crowd.  This was a lesson for us, we were trying to be too conservative.”

Schricker states that while Toronto audiences continue to be supportive of Iranian artists, the Iranian music scene has changed a great deal in the past five years.

“Classical Iranian music is not doing that great,” explains Schricker and adds, “Five years ago there was always some huge band like Shahram Nazeri, Dastam Ensemble, or the Kamkars who had their own faithful audiences.  Many of those bands don’t exist anymore or they started to repeat their music and lost their audiences.  Unfortunately, the older generation of artists are not as creative as they use to be.”

“Numerous other bands are emerging left and right but the quality of their work is not the same,” notes Schricker, “there’s a bombardment of new ensembles who don’t have anything new to say.”

According to Schricker, the future of Iranian music is with artists working on fusion or hybrid sounds and hip-hop.  “People like Kiosk, Abjeez, Namjoo, these guys are emerging. Hip hop is also getting big in the Iranian music scene people like Shahin Najafi and Hichkas.”

This past week Link Music Lab in partnership with Small Word Music brought back Niyaz and Azam Ali.  After years of promoting this group Schricker had no doubts that the concert would be a hit with Toronto audiences.

“We knew they had their own crowd, so even though it was a Thursday night event at a new venue we knew that audiences would come.  In the end 350 people came and this was a diverse crowd that included both Iranians and non-Iranians,” states Schricker.