Sima Sahar Zerehi – The name Pierre Elliot Trudeau still holds special power over immigrant communities in Canada.  While other Canadians remember Trudeau as our country’s rare rock-star politician, exuding the kind of bravado and magnetism that is rarely seen today, in a political era dominated by Prime Ministers in sweater-vests; immigrant communities often herald Trudeau as the father of multiculturalism.

It’s no secret that Trudeau and his legacy in the late 60’s and 70’s as the fifteenth Prime Minister of Canada have done wonders for the Liberal Party. In fact, we can argue that the Liberal Party’s diversity posters featuring various ethnic and racial communities would have never been possible if it hadn’t been for Trudeau.

Even today, more than forty years later, the name Trudeau is still used as shorthand by socially progressive Liberals to speak about the importance of minority rights and diversity.

So it’s no surprise, that when speaking with Smitherman, the “T” word quickly came up. 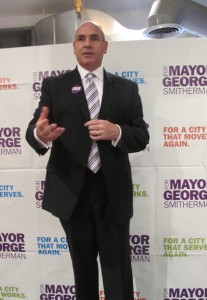 Smitherman who has positioned himself as a champion of minority communities sees Toronto as a city of diversity.

He states, “The city is immigrant communities.”

Speaking of his opponent, mayoral candidate Rob Ford, Smitherman remarks,  “He sees a Toronto where he divides everybody up.”

Channeling Ford he states, “those people over there they don’t fit into my vision of Toronto and they’re not part of my Toronto.”

From his perspective Smitherman believes that  “Toronto is only Toronto because all these minority pieces come together to make one, so to me if you take the immigrant experience out, there is no Toronto left.”

He states, “I’m from a minority community too. I don’t look like a minority, I’m a white man and I’ve enjoyed privileged responsibilities.  But as a gay person, I know that’s controversial to some, I come from a community that is in tune with the minority experience.”

Most politicians who are from the lesbian or gay communities would shy away from speaking about their sexual orientation, particularly when being interviewed by an ethnic publication.  But Smitherman refuses to hide in the closet and sees his status as a gay man as a point of connection and not division from immigrant communities.

He explains, “I come from a community that suffers discrimination, sometimes persecution; in recent history even persecution at the hands of the police.  I think these things give me an advantage of understanding what happens when minorities are singled out.”

Although Smitherman is frank about the challenges he faced early on in his political career – trying to build relationships with various ethnic and religious communities as an openly gay man – he refuses to allow these divisions to dominate his political outlook.

Smitherman’s message is about building bridges, establishing relationships of mutual respect and focusing on common interest.

“All Torontonians need is a city government that makes it possible to move around; all citizens of Toronto need a government that wants to help them achieve economic opportunity and the independence and freedom that stems from it,” notes Smitherman.

He concludes our discussion by stating, “My Toronto is the sum of all its parts and that’s what makes it so powerful.” Smitherman adds that if elected mayor he wants to make Toronto “a city as powerful as it is big.”