Sima Sahar Zerehi – You might have seen him around, maybe at Mel Lastman Square during the annual Nowruz events, at the coffee shop by Sheppard subway station, or at the cinema by North York Centre.  He’s the kind of guy you would have noticed in a crowd, broad shoulders, square jaw, the athletic type.  His name is Sepehr Hajapour and he’s 28 years old.

Although Sepehr has been living, volunteering and working in Toronto since 2009, and has broken no laws, he’s been held in Metro West Detention Centre for over two months and is facing possible deportation to Iran. 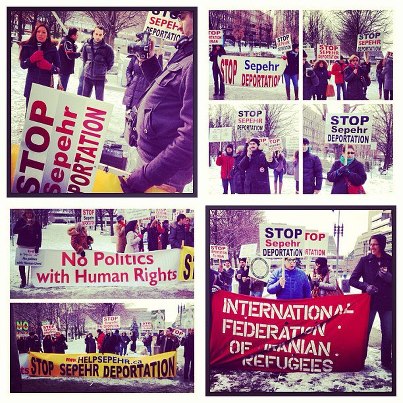 Sepehr was an amateur boxer, with little reason to get mixed up in politics, but after the fraudulent election of 2009, like many other young Iranians, he found himself being targeted by the Islamic regime as a person of interest.  Fearing for his safety he left the country and eventually arrived in Canada where he applied for refugee status at the airport.

In Toronto, Sepehr joined his aunt Rouhangiz Nassirzadeh and two young cousins, Ramin and Yaseman.  He soon became an integral part of their family, acting like the father figure the kids so desperately needed.  His training as a boxer had given him a great deal of self-discipline and the formula on how to achieve goals – lessons that he imparted to his cousins, who were in need of a little guidance during their difficult teenage years.

His aunt Rouhangiz talks at length about how Sepehr became a part of her family. “Sepehr was such a great influence in the house, he changed my life completely.  He took on the role of a father figure for the kids who didn’t have a dad with them, he would buy them clothes and do the little things that a dad would do. He also took care of me, when I would come home from work, dinner was prepared, and the house smelled warm and welcoming. He helped all of us, and made our house a home.”

Ramin, Sepehr’s 18-year-old cousin echoes his mom’s sentiments, “All my life I lacked a fatherly figure, as my real father was in and out.  Sepehr took on that role. He guided me and helped me when I needed it most.”

Soon after arriving in Canada, Sepehr started volunteering at the Toronto District School Board by assisting with special needs students.  He was a natural at the work; his athletic training gave him an edge at the often physically challenging work. He was also able to establish great rapport with his colleagues and became a favourite with the students and their parents who saw him as a positive role model for their kids.

Sepehr was such a success as a volunteer that within a few months he was hired by the TDSB as an Occasional Educational Assistant. He spent most of his time at Sir William Osler High School where he hoped to secure a full-time position in the near future.

For a while it seemed like Sepehr was on the road to success in Canada, but one thing kept him up at night, the fear of losing everything he had worked for in Canada and being forced to return to Iran, where he was in danger.

Sepehr’s experiences in Iran as well as the trauma of being a person with precarious immigration status severely impacted his mental health. With medication he was managing his depression and working through the trauma with the assistance of a psychiatrist.

His aunt Rouhangiz recounts how nervous Sepehr was on the day of his refugee hearing, “He had a serious panic attack and couldn’t focus on the proceedings, he was having trouble concentrating, and he couldn’t articulate his responses and that severely impacted his credibility.”

To make matters worse, financial restriction prevented Sepehr from securing expert legal representation, despite the merits of his case, his refugee claim was rejected, a deportation order was issued and on December 6, 2012 he was detained at the Metro West Detention Centre.

Despite his families’ continued attempts to secure his release, and a promise of a $30,000 bond, Sepehr continues to be held in jail.

Last week he was given a notice that he’s scheduled on a flight to Iran on February 8th. On February 6, just prior to our print deadline we received news that Sepehr’s February 8th removal was stayed for the time being.  He will now have an opportunity to submit a new Pre-Removal Risk Assessment application.

His new lawyer, Pantea Jafari explains that Sepehr’s case has been fraught with judicial and procedural errors.

She notes, “Sepehr’s been a victim of a series of oversights.”

From the onset the Canadian Border Services Agency made mistakes on Sepehr’s case according to Jafari. She explains, “He was about to be deported during a period when there was no legal authority to do so in mid December 2012.”

Speaking about his detention she states, “Sepehr was detained due to what I perceived to be a series of misunderstandings due to language barriers. Despite my repeated requests, he was denied access to his medication for 51 days in detention.”

When it came to making a case for why Sepehr was at risk if deported to Iran, Jafari was once again faced with irregularities.  She states, “His Pre-Removal Risk Assessment decision was fast tracked with a decision being issued in only 8 days, when it normally takes several months to issue a decision on a PRRA, even for someone in detention.”

It seems that at every level, Sepehr was met with bad luck and judicial and procedural irregularities.  As a result a young man who has done everything right in Canada and is on track to a meaningful and successful career is facing the danger of being deported to a country that the Canadian government has repeated labeled frightening.

The Harper government’s double talk on Iran needs to be challenged.  Most Iranian-Canadians in exile would agree with Prime Minister Harper’s assessment of Iran as explained in his January 2012 CBC interview with Peter Mansbridge:

“I’ve watched and listened to what the leadership in the Iranian regime says, and it frightens me.”

Harper added, “In my judgment, these are people who have a particular, you know, a fanatically religious worldview.”

He stated that it’s this tendency toward fundamentalism that makes the Iranian regime such a threat, “I think that’s what makes this regime in Iran particularly dangerous.”

Those at greatest risk of being targeted by the Iranian regime are the people of Iran.

Iran has a proven record of human rights abuses, and a person deported to Iran as a refugee is in great danger of becoming a target of the regime.  Canada must stop Sepehr’s deportation and issue a moratorium on all deportations to Iran until the political situation in the country stabilizes.

Since his detention, Sepehr’s family and friends have been feverishly organizing to secure his release and stop his deportation.  They have mounted numerous rallies at Mel Lastman Square in the heart of Tehranto, as well as in front of the Immigration and Refugee Board in downtown Toronto.  They have gathered thousands of signatures on a petition, created a website and launched an online campaign via Facebook.

Jafari, Sepehr’s lawyer, has submitted an extensive application based on Humanitarian and Compassionate grounds on his behalf, including numerous letters of support from those he worked with and assisted through his job at the TDSB.  She is also pursuing other legal avenues to stop his imminent deportation, particularly in light of the irregularities in the procedures and application of law around his case.

His family has also tried to reach the Minister of Immigration, Jason Kenney, directly via letters and emails, but they have yet to hear back.

It’s not too late for Sepehr, Minister Kenney can intervene at any moment, with a single signature he can stop this young man from being sent to an uncertain future at the hands of an unpredictable regime.