ITC (Iranian TV Canada) begun in October 1994 as a thirty-minute television program titled Shahr-e Ma TV (Our City TV) on Rogers’ television.  In 2000 the show was picked up by CityTV and expanded to a one-hour program.  In 2007 the show was transformed into a 24-hour program available via satellite and Internet.

۱. Please describe your program?  What are you known for?  Who are your contributors?   What do you focus on in your issues/episodes?

Our show is a social and cultural program that showcases the activities of the Iranian community in Toronto.  We are focused on local coverage, which includes featuring cultural activists within the community.  We have a strong relationship with various Iranian foundations, associations, and organizations, which allows us to cover their events and enables those unable to physically attend such gathering to take part as television viewers.

In our program we strive to represent the diversity of the Iranian community in Toronto, we conduct interviews, reports and profiles of artists, writers, and entrepreneurs.

Our main role is information sharing and raising awareness within the community.  We hope that our program assists in expanding our community’s vision in terms of democracy, freedom and the opportunities that are available here. 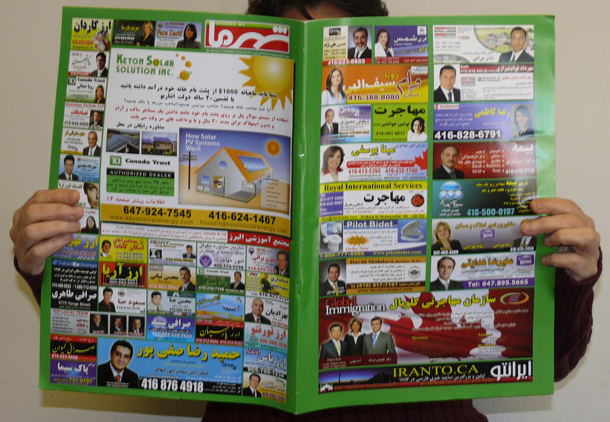 ۲. Who is the audience/readership for your publication/program? Has this demographic changed? If yes, how?

Most of our audience consists of families.  Our primary audience has not changed in the past ten to fifteen years.  Although young people may not watch us, families continue to be loyal fans of the show and follow us as we grow.

Once again I believe that awareness and information sharing are our main functions.  In terms of the roles of ethnic media, I think this comes back to what kind of outlet they are, are they a sports program, political show, news outlet?  I think the roles and responsibilities change for each kind of media.

However, speaking more generally, I believe that ethnic media must show the correct paths to people, and to dissuade people from threading on paths that reject culture and trample on morality.  Media is the real leader of society and has to act accordingly with a sense of moral and ethical responsibility.

Our program showcases our national and cultural events customs and traditions. Celebrations like Nowruz, Mehregan, Chaharshanbe Soori – it allows for the showcasing of our dance, arts, culinary delights and costumes.

Iran is a country with multiple religions, as such we focus on the elements that unite our national traditions rather than divide us.  Our program allows us to showcase the unity of our nation and celebrations are an ideal means of creating and fostering this feeling of inclusion.

Unfortunately I think that we don’t have a relationship at the moment but we should strive to foster such connections.  In reality, we are a culture nestled inside another culture and as such we must be responsive to the society that envelops us.

The relationship between ethnic media and various levels of government is also very weak.  The government has to do more to foster this relationship.  After all we are the outlets that can bridge the linguistic divide between Farsi speaking newcomers and English speaking society. The government needs to further resources, staff and departments whose role is to establish relationships with ethnic media.

We are growing.   The diversity within the media is a sign of the growth and progress in our society.