۱. Please describe your publication?  What are you known for?  Who are your contributors?   What is your focus?

We are a community newspaper that bridges the divide amongst multiple communities of Iranians and Farsi speaking readers in and outside of Canada.  We are a publication in the Diaspora that represents a population of people residing outside their homeland, people who are immigrants, migrants, refugees, and exiles.  We are an outlet for news, debate, and dialogue on current affairs and issues.  We are a cultural and artistic venue where film, theatre, literature and visual arts are introduced and profiled.

Although we cover a multiplicity of issues, I would say that democracy and human rights are our main focus.  But we are not what I would classify as a predominantly political publication; we speak about these issues from a distinctly artistic perspective.  Art, culture, film, poetry and literature are the medium that we use to carry out this dialogue about freedom of the press, the right for political dissent, democratic engagement and social and political freedoms.

Above all, we are Iranian-Canadian. Although the predominant language of the publication is Farsi, there is a distinctly Canadian sensibility to the publication.  The way we approach issues and debates, our perspective on global affairs and our outlook on cultural and artistic productions all have a Canadian flavour.  Even when we write about news and events pertaining to Iran, we do so from the vantage point of Iranian-Canadians.

When it comes to our contributors, I am proud to say that in the past twenty years Shahrvand has had the distinction of working with prominent Iranian writers, journalists, theorists, artists and thinkers living outside and inside of Iran.  There are very few notable Iranian writers who have not at least once written for Shahrvand.   Even the renowned Iranian poet Ahmad Shamloo who has now passed away had written for Shahrvand, despite his reputation for working with very few newspapers.

Our contributors are also as varied as the communities that we strive to represent, they span the depth and breadth of the Iranian community, they include youth, women, groups that represent various ethnic communities within Iran and much more.

Although we pride ourselves as the publication that houses some of our community’s most accomplished writers we are also pleased to continually foster generations of up-and-coming authors, the voices that will carry the future of our community.

۲. Who is the audience/readership for your publication/program? Has this demographic changed? If yes, how?

We have various audiences: readers in Iran, people who can read Farsi all over the globe from Tokyo to Afghanistan, high school students to senior citizens.  Most of our readers are in Canada, followed by Iran, United States and Europe.

One of the main reasons that we have so many readers in Iran is the condition of literary repression and censorship within the country.  Most newspapers and journals that are permitted to be published in Iran are state-controlled, offering only government propaganda. 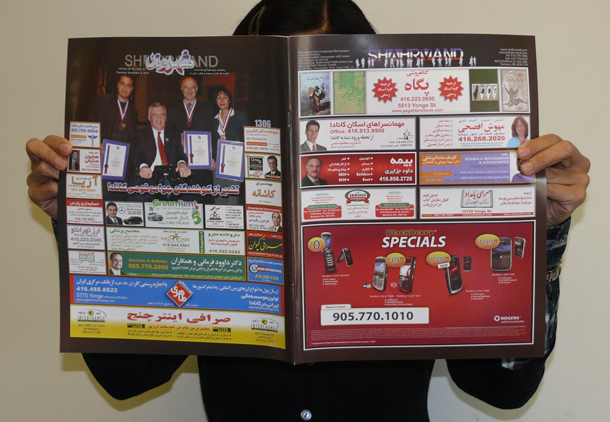 As such, Iranians flock to the Internet and use anti-filter software to be able to access real uncensored news and literary content.

With Shahrvand’s website we can offer international as well as news from within Iran to Iranian readers that is free from the regime’s spin.  We can also offer access to the works of hundreds of journalists, authors, poets and academics whose writings are censored within the country.

I think the most important relationship between ethnic media and immigrant communities is bridging the cultural and linguistic barriers; ethnic media becomes the vehicle via which ethnic communities learn about their new home.  It’s through ethnic media outlets that newcomers gain information about the job market, local politics, and social, cultural and artistic happenings.  Ethnic media acts as their guide, resource and mentor opening paths and inroads into involvement in their new community in Canada.

In many ways I think, in a country that is growing through immigration, ethnic media plays a more key role in building, shaping, and empowering communities than mainstream media.

Ethnic media becomes the space where local politics are developed, policies debated, culture and art fostered and a new hybrid-identity as “Iranian-Canadian” shaped.

Although, we are predominantly Canadian, the reality is that in the eyes of mainstream Canada we are seen as Iranians.  As such what we do, the way we cover issues, our analysis and our focus get translated as being representations of our Iranian identity.

In this way, we become “Canadians” to Iranians residing in Iran and “Iranians” to mainstream Canadian society.  In the end we serve as a bridge between these communities.

I think the relationship between ethnic media and mainstream society in Canada is one of translation, acclimatization and integration of newcomers into this country.  We also act as the mouthpiece for our communities, voicing our issues and giving a venue for those excluded from other mainstream spaces to air their views.

When it comes to mainstream media, we are pleased to have forged many relationships and partnerships with outlets such as the CBC, Toronto Star, NOW Magazine, CTV and many others.

In the past we have worked collaboratively with our colleagues in mainstream media to assist them in their research on stories about Iran or the Iranian community in Canada.  This is the kind of work that we hope to continue to do and expand on in the future.

I terms of the government, we do have a relationship with the municipal, provincial and federal governments.  The presence of representatives from these levels of government at our annual Nowruz Gala and the fact that they constantly send messages, greetings and notices to the community through our publication is a testament to this relationship.

However, this is not to say that this relationship is as strong as it should be or that we don’t have a long way to go before we move away from mere celebratory messages to an ongoing partnership with the three levels of government; where ethnic media is treated as a real stakeholder.  For this to take place we need the government to think more proactively about the allocation of resources to ethnic media.

The whole world is more acutely aware of ethnic identity. We now have ethnic literature; we have writers that identify themselves as ethnic writers and focus exclusively on stories of ethnic communities.  In a city like Toronto where the majority of people identify as immigrants from various ethnic communities this signifier takes on greater meaning.

As this country grows we are going to have more multicultural cities in Canada, cities that reflect the sounds, looks, tastes and feel of the global village.

I think that soon regardless of where you live you will be bombarded by the reality of ethnic identities around you.  Ethnic diversity will be reflected in Canadian theatre, visual arts, culture, human relations, culinary offerings, fashion and even in our business relationships.

I think that in a world where we now offer the option of using the bank machine in multiple languages there is room for infinite growth for ethnic publications that serve various linguistic communities.  As such I know that Shahrvand will be here twenty years from now, in Farsi, in English and perhaps in other languages as well.

We may not be ink on paper, we may be a type font on a computer screen or mobile device but we will be available to our readers across the world.