Sima Sahar Zerehi –The anticipation was mounting – week after week, day after day. It’s always like that with big events, years of expectation, months of planning, weeks of intensive work, days of hurried preparation, until heart in hand we wait for the opening night.

It took the work of hundreds of volunteers and over 150 artists to mount Tirgan 2011.

This was a family friendly event with something for everyone, puppets and face paint for the kids, literature and cinema for the literary set and music and dance for all.

This year’s Tirgan Festival was successful in attracting over 120,000 visitors twice the number of the previous festival, which had taken place in 2008. Neither torrential rain nor a heat wave could dissuade persistent fans from packing in and around Harbourfront’s WestJet Stage to get a glimpse of this electrifying performance on Friday and Saturday night.

The ensemble includes the father and son team of Saeid Shanbehzadeh and Naghib Shanbehzadeh, as well as Habib Meftah-Bushehri.  This is a group that clearly loves to perform together. The bond between the musicians is palpable as they dance, sing and play towards a musical frenzy.

The group was founded in 1990 and has toured all over the world, performing in Iran, Asia, Australia, Europe and North America.  Their music is an eclectic combination of rhythms and melodies from Iranian, Arab, Indian and African sounds.

On Friday night, despite the unprecedented heat, audiences packed themselves into crowded rows and filed in tightly formed lines in order to clap, dance and gyrate to the rhythmic sounds.

On Saturday night despite the downpour, the audience was even larger as many people returned for a second glimpse and brought friends and family to enjoy the show.  Crowds of late arrivals formed into spontaneous dance circles around the venue, dancing and clapping while being soaked by the rain.

Saeid Shanbehzadeh gives every performance his all, keeping nothing back, dancing, singing and playing until he’s drenched in sweat and about to collapse from exhaustion.  He is a world-class performer that exemplifies dedication to his art.

The feeling during the concert was hypnotic; the performance seemed to end too quickly. It was the kind of summer night, filled with friends, community and art that one remembers nostalgically in the cold Canadian winter, providing the kind of warmth that soothes the soul when memories of home seem far away. Sometimes we don’t expect much from young emerging artists, thinking that it must take time and accumulated experience to reach their potential as first-rate performers, but Ida Saki has already hit her stride despite her young age.

Performing a modern dance piece accompanied by traditional Iranian music Ida brought a refreshingly polished performance to Tirgan.  The audiences who lined up for an hour to pack into Harbourfront’s Studio Theatre were captivated by her, rewarding her with standing ovations at the end of her performance.

Ida is an exciting dancer to watch.  She has a unique style that sets her apart from other performers, using signature moves that are as singular to her as a painter’s stroke or a writers verse.

Her performance is dynamic and her choreography varied.  In one moment she’s contorting her athletic body into broken, fragmented almost disfigured gestures with moves saturated with meaning and expression.

In the next, she tumbles and rolls along the stage so softly that it seemed as though she is weightless, devoid of any bones or muscles that could make a sound on impact.

Later, she leaps into the air with fierce determination and athletic prowess in a show of strength and physicality.

Then she shifts the mood and adjusts the tempo sprawling and dragging herself across the stage in gestures heavy with consequence and symbolic meaning.

Ida is mesmerizing, a rising talent in the dance world despite the fact that she is only in her first year at New York University’s Tisch School of the Arts.  This young artist has already made her mark in the dance world, to date, she has received an award from the National Foundation for Advancement in the Arts, been named a Texas Young Master in dance, and has received five national titles, including Distinguished Performer of the Year and Outstanding Dancer of the Year. I admit I’m a fan – so I approached the performance by King Raam and Beat Syndrome starry eyed – hoping to hear my favourite song (Shekarchi or Hunter) performed before an audience that would appreciate it as much as I would.  I wanted to sing along, and clearly, I wasn’t the only one waiting for this chance.

The set included both English as well as Farsi language songs – including songs written by local poetess Tara Aghdashloo.

The performances took place on Friday and Saturday night on Redpath Stage an open-air venue in the heart of Harbourfront.  As expected hundreds of young fans braved the rain to hear the lead singer of Hypernova accompanied by our local Toronto boys Beat Syndrome.

On Saturday, the guys gave the audience an extra treat by dressing up for the occasion – white fitted shirts and skinny ties – to the delight of the audience.

Although the performance was a treat – I couldn’t help but wish that Hypernova was also invited to perform on WestJet stage to rock Tirgan, but there’s always next time. 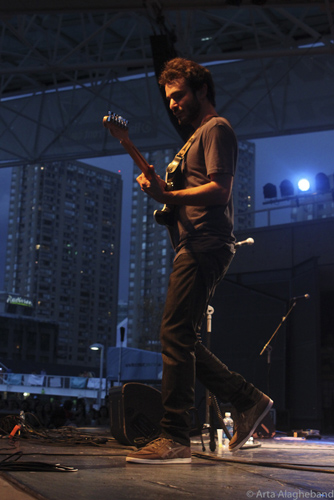 Ok maybe I’ve been hiding under a rock but I didn’t know about Radio Tehran until I had a chance to see Ali Azimi perform at Tirgan.  This was the rock band’s Canadian premiere and Toronto audiences didn’t hesitate to welcome them with open arms.

Azimi is a crowd pleaser, performing hit tunes to appreciative audiences hungry for familiar sounds.  Although the band is currently based in London England, they originated in the Tehran underground.

Radio Tehran filled a much-needed gap in the Tirgan program by offering new youth oriented music to a predominantly young audience.  This was a welcome departure from a program saturated with traditional dance and folk music.

Fans of Radio Tehran will be pleased to know that the bad is currently working on their second album as well as preparing for a North American and European tour. While their musical program was designed to satisfy the audience’s cravings for traditional tunes the addition of Western instruments produced a unique sound to their music.

I look forward to seeing this group perform a more innovative program in future festivals so that they can showcase their uniqueness. Les Ballet Persans was one of the featured ticketed shows in the festival taking place at Harbourfront’s Fleck Dance Theatre on both Friday and Saturday night.

The ballet offered a comprehensive program that included several live performances as well as some highlights from their past repertoire which were showcased on a video montage.

The pieces were varied offering a sample of works ranging from the jovial to the dramatic.

Many of the performed components were innovative, visually compelling and expertly executed offering the Toronto audience an ample sample of the company’s repertoire.

Amidst the program the company’s founder, choreographer and Artistic Director Nima Kiann offered televised messages that explained the history of the company to new audiences.

Unfortunately, the added components of the televised talks and video montages did not marry well with the rest of the performance – instead diverting the attention of the audience away from the stage.

Perhaps, in the future the lecture and video showcase can be separated from the performance and offered solely in a workshop setting or as part of an artist talk prior to the commencement of the stage show. 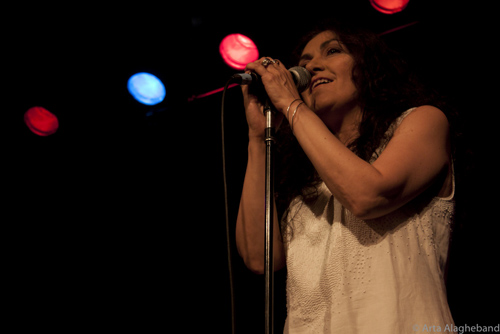 The Late Night Jazz Bar with Rana Farhan was one of my favourite festival experiences.  The intimate setting of the Brigantine & Tent at Harbourfront Center was a welcome retreat after a day under the blazing sun and pouring rain.

This was a chance to mellow out at the end of a long day, get a drink, and enjoy a few smooth jazz tunes with a room full of die-hard Rana Farhan fans.

These fans were hardcore, they had paid for tickets and they wanted a piece of the action.  It was hard to find a choice spot near the stage as people were lined up to get a good view of the jazz diva – and she played to the adoring audiences by offering a solid set of old and new favourites.

This was a formula to be definitely repeated in future incarnations of Tirgan: good music, intimate setting, accompanied by a bar.

There’s no denying the fact that Iranians like to dance – and no Iranian festival could be considered complete without a dance party.  Late night Friday and Saturday after the performances had wrapped up, festival attendees, artists and volunteers headed to the Brigantine & Tent at Harbourfront Center to dance the night away.

The house DJ was Amir Kazemi aka DJ Delbar, a well-known figure for the Iranian dance scene with more than thirteen years of experience in spinning.  DJ Delbar is the co-founder of RadioJavan.com, the most popular Iranian online radio station.

Revellers danced and drank the night away to a medley of Iranian and House music while rubbing elbows with the festivals stars. If nothing else we’re patriotic – so we ended with a national choir and some tried and tested classic hits.

The Toronto based choir led by Kamal Taravati included a few soloists as well as musical accompaniments on various instruments.

The choir offered a program catered to Tirgan’s varied audiences, they performed nostalgic Iranian favourites, a piece designed for children featuring a group of young singers, as well as English tunes recognizable to non-Iranian audiences.

The classic songs offered audiences a chance to chime in and sing along to their favourite songs.

Overall, this was a mellow end that wrapped the festival on a lazy Sunday afternoon.

With the third Tirgan Festival now under wraps, we have an opportunity to reflect back on the successes and challenges of this growing event.

Clearly, Tirgan has now been established as a recognizable arts festival and as we move towards Tirgan 2013 it becomes imperative not only to celebrate our victories but also to troubleshoot our shortcomings.

I look forward to seeing Tirgan grow into a world-renowned festival that introduces audiences to the best of Iranian art while also opening spaces for challenging new innovative works.