Sima Sahar Zerehi – I remember sitting in a large lecture hall crammed with over 300 students on my first day of school at the University of British Columbia.  A gruff professor, who had the look of someone who drew the short straw walked in a huff noisily slamming the course reader on the podium.

His every gesture spoke to his distaste for the unwanted responsibility of shepherding first years through a mundane introductory class.  Seeing the overflowing room crawling with unruly freshmen he shook his head disapprovingly and barked out the following command: “look to your right – look to your left – by this time next year half of you will no longer be here with us.” 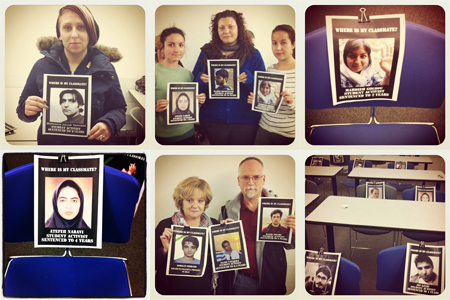 In Canadian schools, it’s the financial burden of post-secondary education or academic pressures that often force students to drop out of university after their first year – considerably emptying the overcrowded lecture halls.

In universities in Iran, seats are emptied of students who have worked years to gain entrance into these coveted spots, for simply speaking out for civil and educational rights.

It’s a dark joke in Iran that the best place to get an education in the country is behind the walls of the notorious Evin prison, where the Islamic government continues to imprison our brightest students and professors.

While in a country whose population is dominated by young people the student struggle is always central to any human rights or pro-democracy movement. December 7th or 16 Azar, is a special time to reflect on the plight of Iranian students.

The history of Student Day in Iran can be traced back to December 7, 1953 (16 Azar 1332 in the Iranian calendar) in the Pahlavi era. On that day three Iranian students, Ahmad Ghandchi, who belonged to Jebhe-e Melli, along with Shariat-Azavi and Bozorg-Nia, who were members of Hezb-e Tudeh, were killed when the police opened fire on the students at the University of Tehran.  The students were planning on going on strike to protest Nixon’s visit to Iran and the resumption of Iran’s political relations with Great Britain.

Iranian students were particularly outraged by the visit and the continuation of political relations with the UK as this was in the aftermath of the 1953 Iranian coup d’état (known in Iran as the 28 Mordad coup).   The coup, named the TPAJAX Project, was jointly orchestrated by British and American intelligence agencies and resulted in the overthrow of the democratically elected government of Iranian Prime Minister Mohammad Mosaddegh on August 19, 1953.

To date December 7th continues to be a day of civil and political protest in Iran, in the aftermath of the 2009 fraudulent Iranian elections, large student protests broke out in various Iranian cities as students used this opportunity to generate awareness around the attacks against many of their fellow students languishing in Iranian prisons.

This year to commemorate the anniversary of 16 Azar a campaign has been launched to call attention to the plight of Iranian students.  The Empty Seat Campaign is a relatively simple initiative that has been circulating on the internet via various social networking applications.

The campaign calls on students, professors and others who have access to post-secondary institutions to take part in an simple action that can help educate and mobilize the world’s attention towards Iranian students.

The campaign organizers ask people to simply print out images of imprisoned students in Iran and place them on empty classroom or lecture hall seats and then take a picture or record a video and send it to the campaign email (sandaliyekhali@gmail.com) or Facebook account (http://www.facebook.com/Empty.Seat.Campaign).

To date many people have taken part in the campaign including a group of students from George Washington University in the United States who have recorded a short video of their action http://www.youtube.com/watch?v=qxyS6muJLdM.

In Toronto, a group of students and human rights activist gathered in North York’s Mel Lastman Square on December 6th with pictures of imprisoned and murdered Iranian students to commemorate 16 Azar.

The Student Day actions on December 7th will be dovetailed by the United Nations’ Annual Human Rights Day on December 10th, which commemorates the presentation of the Universal Declaration of Human Rights.

This year Amnesty International is commemorating Human Rights Day with a campaign named Write for Rights.  This letter writing campaign is designed to use the power of letter-writing to help bring about the release of people who have been wrongfully detained and to influence world leaders to protect individuals or people whose human rights have been denied.

Many notable writers including Canada’s Margaret Atwood have joined the campaign.  Atwood and PEN Canada have used this opportunity to focus on the campaign in support of imprisoned Iranian human right’s lawyer Nasrin Sotoudeh.  Atwood has been using her significant Twitter following to speak about Sotoudeh’s case. You can join the Amnesty  campaign by visiting http://www.amnesty.ca/writeathon/.