۱. Please describe your program?  What are you known for?  Who are your contributors?   What do you focus on in your show?

Iran Zameen went on air in 1993 as a weekly Farsi language television program, currently it airs on OMNI 2 TV.  It’s a thirty-minute program that reaches an Ontario based audience. Iran Zameen deals with local news and entertainment, medical news,and historical events from Iran.  The program is designed to cater to viewers from the Iranian community in Toronto; as such it covers local news and events.

Pasargad, our second program started airing in 1995, as a thirty-minute program also on OMNI 2. Pasargad programming has a broader audience than Iran Zameen; this audience is not only Iranians in Toronto but other Farsi speaking audiences across Ontario. 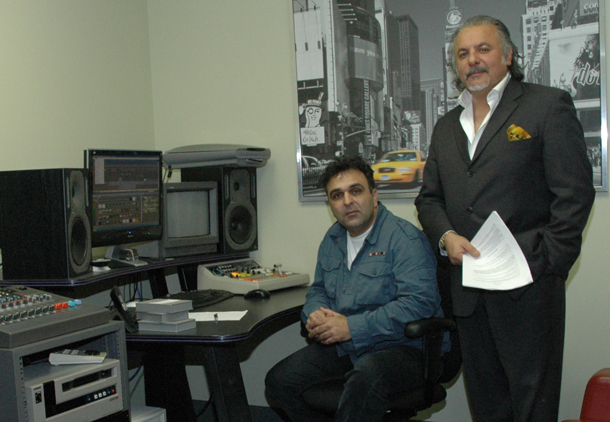 We are also known for being an independent TV program – we don’t have an association with any government or political organization. Our audience knows that we are careful about what we put on air.

As a television show on a mainstream cable station we have the opportunity to go to everybody’s house, this means that we have a lot of non-Iranian viewers as well.  Our viewers include Afghani viewers and other Farsi speaking communities.  In addition, people from other non-Farsi speaking communities sometimes watch our show for the music; I know we have some viewers from the Arab and even Greek and Italian communities for example.

We also have some English language segments, such as interviews with politicians. In 1993 we got a call from the Canadian armed forces in Ottawa requesting tapes of the show to use as aids in their Farsi language classes for members of the military.

Our contributors include professionals such as lawyers, doctors, politicians, and historians from both Iranian and non-Iranian communities.  For example, in the past we featured segments with the York Region Chief of Police.

۲. Who is the audience for your program? Has this demographic changed? If yes, how?

Our primary audience is the Iranian community in Ontario.  However as we are now also available via satellite we also get Iranian viewers in various communities across Canada.

We also have some non-Iranians who watch the program. Currently, seventy percent of our viewers are Iranian and thirty percent are non-Iranian.

When we started almost one hundred percent of our viewers were Iranian but as time went by non-Iranians started watching the show as well.

The demographic of our viewers has changed to include other communities now.  Other Farsi speaking viewers such as Afghani viewers are also watching the show regularly.

To do this, we have provided coverage of all Canadian elections and major issues such as the mayoral race. We live in this country so we have to know what’s going on here and how it affects our lives.

At the same time we provide a link to news from Iran as well.

Ethnic media is like a business card of various communities in Canada; whatever is put on air shows you what’s going on in the community.

When it comes to peoples’ perception of Iran we know we get a very bad wrap in the mainstream media due to its internal and international political issues. There are many misconceptions about our culture, for example in relation to the treatment of women in Iran. Oftentimes I get comments on the fact that our female anchors do not wear the veil and many viewers from outside our community are surprised that the veil has nothing to do with the Iranian culture.

We are also careful about how we portray our community. We don’t put certain programs on air because we think they showcase the wrong image.

In the past two to three years there’s been semi recognition to the value of ethnic media. Multiculturalism is no longer just a policy on paper, people are now interacting with it and the main way that dialogue is being established is via media outlets.

Ethnic media societies are also becoming a place where we are seeing the interest from mainstream Canadian culture towards our media outlets, we are being approached more by businesses and politicians.

During the last recession mainstream media suffered a great deal and some outlets were decimated, on the other hand ethnic media survived.

The reason for the survival of ethnic media during the recession was because ethnic media has an identifiable demographic, so we allowed advertisers to target certain demographics directly.

The recession somehow worked for us – when national advertisers targeted us they received a response from buyers.   Also let’s not forget that purchasing advertising space on ethnic media is much less expensive than mainstream media.

On a provincial level the Liberals were always active in ethnic media.  During the Harris era ethnic media was ignored but now the Conservatives have also discovered the importance of ethnic media and they are actively pursuing us.

Now all political parties are recognizing ethnic media.  During the mayoral race we got requests for interviews by all candidates across all political divides.

I think the future depends on the community that the ethnic media is serving.  In addition, our future is directly linked to immigration patterns.

When the Italians were coming here in droves there were many Italian media outlets, but as the influx of Italian immigration slowed down and the second generation lost touch with their language the need for Italian language media decreased.

I think the Iranian community is facing a similar future.  If the influx of immigration from Iran stops and the first generation ages and the second generation adopts English as their primary language the need for Farsi language programs will decrease.

Like the Italian community we will have to switch to English programming.

The survival of ethnic media depends on immigration trends and the importance of language preservation on the community.  If members of our community continue to send their children to Farsi language classes and insist on the preservation of the language then we will continue to have an audience.

In the long run I don’t think that a multi-lingual programming will be able to survive – it meets a short-term need but it has to face an identity issue in the long run.