Sima Sahar Zerehi – In the past few weeks we began our section titled Mapping Tehranto by introducing you to some of our community’s media outlets via our feature Tehranto’s Fourth Estate.  As we await responses to our questionnaire from the remaining media outlets we will proceed with our next feature – Tastes of Tehranto.

One of the main pillars of any community is their culinary tradition. Food brings people together, meals shared with family and friends and memories sparked over the familiar tastes of home.

For me the aromatic flavour of Iranian black tea, the smell of charbroiled kabobs, the distinct salty flavour of Iranian feta, and the sweet nectar of a pomegranate are just some of the familiar tastes of home that draw me to the Iranian shops and restaurants.  Regardless of how my palette develops with exposure to new culinary traditions, nothing has the same nostalgic pull on my senses than basmati rice or fresh baked Barbari bread.

So it’s no surprise that much of the Iranian community in Toronto is centered on the restaurants, bakeries, patisseries and shops that offer residents of Tehranto the familiar tastes of homeland and childhood.  As such, one of the segments of Mapping Tehranto will undertake the project of introducing some of our community’s culinary gems.  We’ll bring you interviews, profiles, and stories of the cooks, grocers, and bakers that have devoted their lives and careers to creating the tastes of Tehranto. 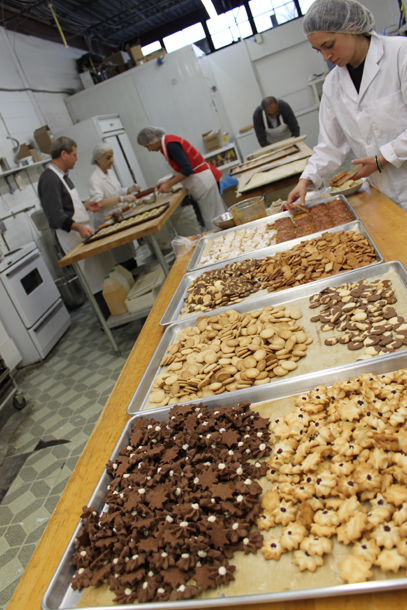 The Master Bakers at Shirini Sara

Vida Malek gently rolls a small ball of dough on the prep table in the cavernous kitchen behind Shirini Sara’s pastry shop.  Although it’s a cold and rainy November morning, the patisserie, which is tucked away in a remote plaza on Leslie Street, is warm with the smell of baked goods; hints of vanilla, cinnamon, cardamom, rosewater and orange blossom fill the air, smells of freshly baking cookies and cakes.

Vida is dressed in what appears more like a lab coat than an apron with a look of focused determination on her face; the matriarch of the pastry shop resembles a scientist undertaking serious research rather than someone making delectable sugary treats.   Intermittently she adds a few drops of coffee and sprinkles of coco powder; “is this the colour brown that you were thinking of?” she asks Vanessa in Farsi while holding up what’s now a brick coloured ball of dough.  “No I want a more chocolate brown,” responds the striking young woman with dark almond shaped eyes and long mahogany hair in a Farsi laced with a distinct French accent.

Mother-in-law Vida Malek and daughter-in-law Vanessa Malek are working on a marzipan gateaux, made from almonds and pistachios for a prominent customer at Pusateri’s.  Vanessa the creative mind behind the operation has a vision of a pistachio coloured cake with a decorative chocolate trim and adored with their now signature triple berry arrangement.

The design is chic, modern and understated as per young Vanessa’s French/Persian sensibilities and Vida is the baker who’ll make this creation come to life as an edible work of art infused subtly with traditional Iranian flavours and a French culinary flare.

The order is of special significance to the Shirini Sara team not only because the customer is a VIP, a millionaire flying to Canada for a birthday celebration, but also because their relationship with the elite grocery store Pusateri’s is only a few months old.

Vida Malek founded Shirin Sara in 1978 in Tehran’s affluent northern suburb as a deluxe patisserie catering to elite customers such as the Persian imperial household.  Supported by her mother Talat Alai, who is still a vital resource to the operation in her 90’s, Vita became Iran’s first female patisière.  Her signature was to create French-influenced Persian culinary pastries subtly flavoured with the traditional tastes of Iran.

“Unfortunately, when people think of Iranian pastries they think rosewater, but that’s not how we do things,” states Nader Malek the man in charge of the bakery’s front-of-house operations.

“Yes we use cardamom, rosewater, orange flower water, and saffron but not in every pastry, cookie or cake and never too much.  Our flavours are subtle and sophisticated,” explains Nader.

Nader Malek is the type of storeowner who always greets customers with a free sample and guests with a freshly brewed cup of tea.  He has a gentle disposition and a friendly mannerism that makes him an ideal candidate for customer service.  Like most small business owners Nader Malek takes on multiple roles in the operation and also acts as Shirini Sara’s accountant.  For years he’s also been the public face of the operation an honour that he now most willingly shares with daughter-in-law Vanessa.

For decades Shirini Sara has been a hidden gem catering almost exclusively to the Iranian community in Toronto.  In Toronto the patisserie began as a small operation out of the Malek’s home when they first immigrated to Canada in 1989.

“When Vida and I arrived in Canada many of our friends knew about our bakery in Iran.  So they would come to us and order pastries, cookies and cakes.  That’s how we started in Canada, by baking orders in our home,” explains Nader Malek.

“In 1990 we opened a store near Sheppard but we had to move soon because of the subway construction, so we came here to Leslie, we picked this location because it has a very large kitchen and we always had plans to distribute our pastries to other retailers.  This location was ideal for that but it took Vanessa joining our family and business for that plan to come to life,” explains the doting father-in-law.

While Shirini Sara or Pastry House to Canadian customers has been a Tehranto icon for almost two decades, it is just recently expanding into a supplier of high-end pastries to some of Toronto’s most discerning fine food markets such as Whole Foods and Pusateri’s.

“This was one of my missions to bring Shirini Sara closer to the customers, not only Iranian customers but Canadian customers as well,” chimes in Vanessa.

“I was taking the pastries and cookies with me wherever I was going and people were always asking where is this pastry shop and when I would say on Leslie people would just say oh forget about it, so I said I’m going to do something about this,” explains Vanessa.

“My mission was the distribution part,” adds Vanessa. “It was the job of the new generation to do it, and it was so simple for me, the products are so perfect, everything is all natural, it is so easy to sell.  I went straight to Pusateri’s and other high-end stores and they were just amazed.”

Vanessa brought new ideas and energy to the operation, adding a website, and modernizing the look and packaging of the products.

“I have also always been obsessed with nutrition,” recounts Vanessa, “the way that we make the pastries, everything is all natural, the cream is just cream and icing sugar, nothing is added, its just pure, the sponge is so light, it’s all natural, there’s no margarine, or oil or butter, our pastries are never over sweet.  Never too much, the perfect balance of flavours.”

She explains that Shirini Sara pastries also met a need in the market.  “The market has a lack of gluten-free products so when I approached retailers they were amazed to see high quality glutton-free products.”

How Shirini Sara is able to make their delectable treats glutton-free is a closely held trade secret but Victoria did hint that the secret was rooted in using traditional Persian ingredients foreign to most western bakers.

Today Shirini Sara’s shirini khoshk (‘dry’ cookies) and shirini tar (fresh cream patisseries) and cakes can be purchased not only at their flagship store but also at the Pusateri stores on Yorkville, Avenue Road and Bayview Village.  In the near future the gluten-free treats will also be available at Whole Foods and the Malek’s are negotiating with two other high-end retailers who may also feature the Iranian delicacies on their shelves in the new year.

But for those who want the authentic Shirini Sara experience I would recommend taking the cumbersome trip to their store at 1875 Leslie Street where you’ll be sure to be met by Mr. Malek’s friendly smile and the smell of Vida’s fresh baked treats.