Sima Sahar Zerehi – Despite the howling wind, traffic, and the many layers of scarves and hats worn to protect my ears on the blustery winter afternoon, the boisterous conversation was clearly audible as soon as I opened the door to Super Shayan, an Iranian grocery store.  I followed the lively voices past shelves stocked with pita bread, pickle jars and an assortment of nuts, to find the small-frame of the animated storeowner perched behind the counter chatting excitedly with a customer. 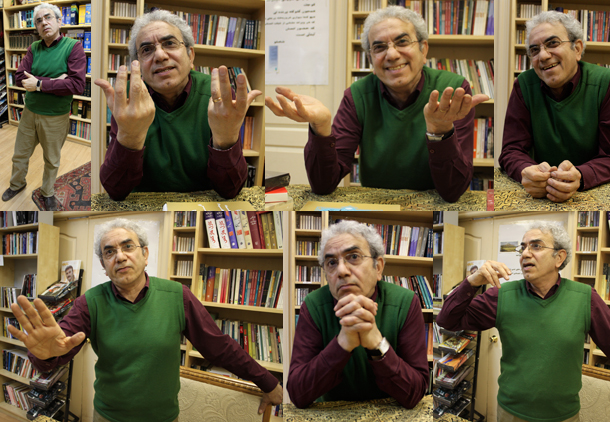 The two men were immersed in a debate over the need for bridge building between the Iranian secularist movement and allies from other political factions.  Although it was in the middle of a weekday and a few other customers were milling about, neither of the two was in any rush to end their exchange.  I stood by for a few minutes before either of them realized they had an audience.

After becoming aware of my presence the shop owner smiled and nodded warmly in my direction.  Then he turned back and wrapped up the chat by pointing to the poster behind him and inviting the customer to an upcoming film about political prisoners.  The verbose customer who was clearly disappointed to end the debate quickly reached for his money and bought a lottery ticket before shuffling out of the store.

Although an exchange over secularism and a poster advertising a documentary about political prisoners seems heavy fair for a grocery store, this is no ordinary supermarket and Alireza Chooback is no ordinary shop owner.

Super Shayan on Yonge and Elgin Mills in Richmond Hill is not only a place to buy the staples for an Iranian pantry but it also houses Saraye Bamdad; an unexpected bookstore nestled in the back of the supermarket since June 2004.

In the days of mega bookstores, we’re use to seeing our novels and texts mixed up with stacks of greeting cards, scented candles, picture frames and blankets. But a bookstore perched behind a grocery store that sells Iranian cheese and basmati rice is a purely Tehranto inspired phenomenon.

Saraye Bamdad is housed in what should be a storage room behind Super Shayan market, a wall of Farsi language DVD’s and CD’s serves as transition adjoining the grocery store to the bookstore area.  The space is furnished with floor-to-ceiling bookshelves brimming with various volumes.

Musical instruments and posters featuring images and quotes of writers, intellectuals and political activists clutter the few sections of the space not taken up by books.

A narrow rectangular table adorned with a traditional Iranian tablecloth is placed in the middle of the room, surrounded by a few chairs, presumably as a reading space for customers.  This is where our interview takes place.

Despite its compact size, Saraye Bamdad is impressively stocked with a wide variety of books ranging from novels, to children’s books, reference texts, history texts, volumes of poetry, philosophy books and more.

Although housing a well-stocked Farsi language bookstore within a food market would be a lofty venture for most entrepreneurs, Alireza Chooback’s true intention when opening Saraye Bamdad was a much loftier goal.

“We didn’t just want to be a bookstore,” explains Chooback. “As you can see we didn’t even call ourselves a bookstore but simply Saraye Bamdad.  As such we could be both a bookstore and a centre for cultural projects.”

Chooback a pensive looking middle-aged man with an expressive face and intelligent eyes is an Industrial Engineer by trade.  The storeowner has a natural gift for gab.  He’s the kind of person who speaks with his whole body when engaged in conversation, gesturing wildly with his arms and hands, his expression morphing from one extreme to the next, much like an actor accustomed to projecting from a stage.

A natural storyteller, Chooback recounts his motivations for wanting to open Saraye Bamdad,  “When I came to Canada in 1996 with my wife and two kids, I tried to find work in my own field, but I couldn’t.”

He continues, “Due to a series of coincidences we became the owners of a supermarket.  The store happened to have a storage space in the back.  I thought that this space was a great asset.”

Chooback chuckles as he tells the next part of the story, “Our business partner suggested that we convert his space into a butcher shop and sell meat like many other Iranian grocery stores, but I had other ideas.”

“The reality is that I have always wanted to have a bookstore,” confides Chooback.

“I knew that some work has to be done in the area of culture. I also felt that in the North of the city, where we’re located, we have a shortage of a centre that can do this kind of work.”

For Chooback a bookstore was a natural stepping-stone for broader cultural innovations.  He notes, “We felt that one of the branches of our work could be devoted to books and reading and popularizing the culture of reading as a means of fostering critical thinking.”

In speaking about the customers at Saraye Bamdad, Chooback notes: “We have a circle of customers who are people in search of the popular novels of the day in Iran.  We have others engaged in research or political work in need of historical or academic books.”

But Chooback’s real interest lies in a new group of customers that have recently emerged.  He breaks into a smile and his dark eyes sparkle as he explains, “Since the past election in Iran and the emergence of the Green Movement, we have some customers who have become interested in the history of Iran. This group includes both young and older customers.”

He recounts, “Just this past week I had an older customer who came in and said I don’t know the history of my own country, what can you suggest that I read to familiarize myself with this history. I encouraged him to start reading about the Iranian Constitutional Revolution and go from there.”

The role that Chooback plays at Saraye Bamdad is more akin to the relationship between a librarian and reader than a bookstore owner to a customer.  His intention is not to simply sell a book but to guide readers as they discover new texts.

He notes, “sometimes one feels that simply giving someone a book is not enough, you also have to establish a rapport with a customer and guide them along their intellectual journey.”

Chooback adds, ”you don’t want to tire and discourage them by suggesting books that are not suited to their reading style. Sometimes you have to first see where someone is at, where they are standing now, in order to decide what to suggest to them that is in line with their knowledge and critical abilities.”

Guiding readers is one of the many roles that Chooback plays in Tehranto.  “When we started the bookstore we also begun to undertake other cultural projects alongside it like inviting speakers to give talks,” states Chooback.

“We were also hoping to organize events that feature specific books and introduce the public to various texts. That’s something that is still in the works,” admits the storeowner.

Chooback is the kind of person who always speaks in plurals, for him it’s never ‘me’ or ‘I’ but ‘we’ and ‘us.’  Although he has a business partner and also works collaboratively with his wife Afsaneh Mohajer, many others are also included in Chooback’s circle of associates.

“It takes many people to run a bookstore,” explains Chooback.  “Simply finding and ordering books is an adventure in itself.  In addition, we need people to assist in selecting books, to advise us on titles that are interesting, educational and critically acclaimed. We also need advice on which popular books to select to meet the needs of customers interested in bestsellers.”

Besides business associates and advisers, Chooback, a natural leader, has also succeeded in collecting a circle of like-minded individuals around Saraye Bamdad as collaborators.  Together with these colleagues, Chooback has establishing Saraye Bamdad as a cultural and political hub within the Iranian community in Tehranto.

“Just this year we organized a trip to New York City to protest Ahmadinejad’s appearance before the United Nations,” notes Chooback.

Chooback has also ventured into the field of publishing through Saraye Bamdad.  The stor owner proudly holds up a skinny volume titled “Shahnameh Baraye Hame” (The Book of Kings for Everyone).  The unassuming text is a popularized version of the enormous poetic opus by Iranian poet Ferdowsi rewritten by Hassan Golmohammadi.

The Shahnameh is one of those works that is known by most Iranians and read by few.  The enormous volume consists of 60,000 verses, which chronicle the mythical and historical past of Iran from the creation of the world until the Islamic conquest of Persia in the seventh century.

“We had many customers that wanted to read the Shahnameh or to share it with their children but they didn’t want to weigh though six to seven hundred pages, or they grappled with the archaic language” explains Chooback. “So we produced this book.  It shares the stories from the Shahnameh using easy to understand modern language accessible to most people.”

At this point in our conversation about the Shahnameh, it’s importance to Iranian literature and our personal memories about this seminal text, a couple wanders into the bookstore in search of a reference book on the dietary benefits of fruits and vegetables.

Chooback walks decisively to one of the shelves and quickly procures the desired text for the appreciative customers.  I glance down at my phone to realize that the discussion over books has taken the better part of an hour.  With regret I realize that I have to end this engrossing conversation.  As I reluctantly take my leave, Choobak quickly hands me a copy of the popularized Shahnameh book and says, “read it and come back and tell me what you think.”