The interior is a combination of brick walls and picturesque narrow wooden stairways – a relatively high ceiling and large storefront windows give the boutique space a sense of airiness. 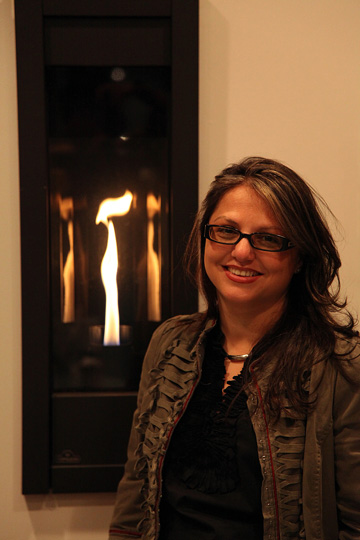 At night, when the street is dark, the space glows – distinguishing itself from its neighbouring shops – coming to life with the presence of patrons and visitors poised to see the works of emerging artists.

Just a few short blocks away from Toronto’s Distillery District, Queen Gallery is a tell-tale sign of the expansion of the city’s art scene into the east end.

Having just celebrated its second anniversary, the boutique gallery is no longer simply the new kid on the block of the Iranian-Canadian art scene.

During its two short years, Queen Gallery has made its mark as a destination for those interested in contemporary art produced by Iranian artists residing in all corners of the world.

Gallery Director Mahrokh Ahankhah, an architect by trade, is the woman behind the up-and-coming arts destination.

Ahankhah explains her vision behind the project, “The main focus was to have an international art gallery.” She adds, “The first thing to do was to go around the world, collect art by emerging artists and put the energy and time on them to introduce them to new audiences.”

With the help of a jury, which has included, Ahankhah’s former professors Gholamhossein Nami and Valerie Kaelin, Queen Gallery has been able to introduce Toronto art lovers to many artists who would not have otherwise been able to showcase their work in Toronto.

This past week, the gallery hosted its 38th exhibition titled Degenerate Art featuring the work of photographer Oscar Wolfman, a regular contributor.

Although since opening its door, Queen Gallery has enjoyed relative success; the venue has also faced its share of obstacles.

Ahankah recounts the story of the gallery opening, “We were suppose to open in May 2009 but we were not done with remodeling so our opening had to be postponed to July – this was in the aftermath of the Iranian election.”

“I didn’t know how to have a grand opening with all the situation In Iran unfolding and people dying,” confesses Ahankhah.

After consulting with Shahrvand’s Managing Editor Nasrin Almasi, Ahankhah learned about Fly with the Cage Toronto.

She explains, “Fly with the Cage was a call for submission for artists from all over the world in response to the Green Movement in Iran.  The Theme was inspired by the Sufi proverb ‘If you can ‘t fly out of the cage, Fly with the Cage.’”

“I was able to get in contact with Peyman Soheili one of the organizers and on August 13, 2009 we had our grand opening featuring this show.”

Speaking about the accomplishments of the gallery in its first two years, Ahankhah notes that to date Queen Gallery has featured the work of over 120 artists.  She explains that approximately 70% of the artists featured have been of Iranian descent either living in Iran or residing in the Diaspora.  The remaining 30% include a combination of Canadian and international artists.

Since August 2009 Queen Gallery has been able to participate in a number of major arts festivals in Toronto including Scotiabank’s Nuit Blanche 2010 and CONTACT Photography Festival 2010 and 2011.

For CONTACT 2010, Queen Gallery presented Nobody Will Walk on the Forbidden Fruit, a group photography exhibit featuring Ali Kamran, Kamelia Pezeshki, Afra Poordad, and Lida Shanechian.  The show, inspired by the poem Cold Season by Iranian poet Forough Farrokhzad, focused on the experience of diverse women from various vantage points.

For CONTACT 2011, the gallery mounted two shows Landscape, Revolution, People featuring the works of Ali Kamran, Gohar Dashti, and Aydin Matlabi and West by East by Shadi Ghadirian.  Both shows focused on socio-political issues in Iran.

“We never had any problems with finding artists for the gallery,” explains Ahankhah, “we always had many submissions to consider.   So far we only had two to three shows where we went after the artists.  Including a painting exhibition by Iranian artist Bahram Dabiri and The Art Explorer another painting exhibition by Ali Soltani”.

Other feature shows at the gallery have been the annual Nowruz and 50/50 exhibitions that have attracted diverse group of artists as well as media attention.

Ahankhah states, “The plan is to have more international artists at the gallery in the next year.”

She explains, “Since our gallery is small, we don’t have any room for installations, we have had some sculpture but because of the space limitations we haven’t featured larger pieces.”

Plans are currently underway to move Queen Gallery to a larger space across the street.

One of the reasons for the move is financial.  “The gallery has not been able to financially sustain itself in the past two years,” states Ahankhah.

“There are so many artists who can’t show their work because they can’t afford the cost of framing and printing,” she adds.

In the past, the gallery relied solely on the contribution of sponsors to finance their shows.

She notes, “We have some friends who only work with real-estate agents who support the artists.”

“Contributions from sponsorships can be minimum such as helping with the opening reception and advertising.  Or it can be more substantial to include framing, printing of photographs – all the components that are the responsibility of the artists,” explains Ahankhah.

Ahankhah hopes that revenue from renting the new expanded space will assist in offsetting the costs of future projects.

She explains, “The new place will have two stories with a third one to be completed in the near future. The first floor will be used as an exhibition space to be rented to artists selected by our jury.  The second floor will house our permanent collection and the basement will be used for workshops, classes, and video art installations.  For the third floor we have another goal for the future – to have an arts auction.”