Sima Sahar Zerehi – There’s a formula in action films deployed to captivate the masses.  The shoot ‘em up, action-packed sequence of car chases and explosions is interrupted at the mid-way point. The camera slows down taking a break from the adrenalin packed scene with a romantic interlude.  At this point a sexy leading lady appears on the screen for a few minutes to distract the audience who may be getting oversaturated with images of guns, cars and explosions.  By the time the film returns to its main storyline, the audience has had a rest and is ready to be re-stimulated with more acts of mayhem and violence. 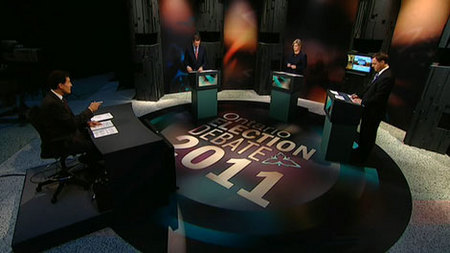 Well, the provincial leaders debate featuring three of the four heads of Ontario’s main political parties was far from an action film.  The cast of stone-faced politicians including the Liberal’s Dalton McGuinty, the New Democratic Party’s Andrea Horwath and the Conservative’s Tim Hudak can’t exactly be called a star-studded line-up.

Similarly the dry, almost prosaic debate over tax increases and a flailing economy with few opportunities and jobs for young people, and shrinking services for seniors was not quite akin to the story line of an action film.

Nevertheless, the provincial leaders had an ace in their sleeves when it came to waking up the audiences after the mid-way point of the televised debate.

While action films have sexy starlets to distract the audiences, the provincial leaders used immigrants and the ethnic vote to inject the debate with new energy.

During the fifth question about post-secondary education – just as the audience was about to dose off – McGuinty used his trump card to fire back at Hudak and reinvigorate the monotone exchange.

In a rare show of poise, Dalton McGuinty put the Conservative leader in the hot seat by critiquing his attitude towards foreigners and new Canadians.

“He doesn’t believe we should provide any scholarship support to foreign students,” fired McGuinty at Hudak and added, “The fact of the matter is that foreign students, who are coming to Ontario today, are spending a billion dollars annually – they’re helping to subsidize university and college education for all Ontarian.”

McGuinty didn’t stop there in his efforts to portray the Conservative leader as a xenophobe, he also noted, “He says he doesn’t like Samsung in part because it’s a foreign multinational.”

Going for the kill, the Liberal leader skillfully distanced himself from Hudak with his comment, “I’ve got to tell you I’m not comfortable – foreign students, foreign multinationals and foreigners.”

This exchange followed Hudak’s clumsy attempt to portray himself as connected to immigrants.  Early in the debate the Conservative leader had noted, “I’m the son of immigrants who came to Ontario barely speaking a word of the language – only a few dollars in their pockets – but they believed in this province as a place of hope and opportunity.”

McGuinty’s well-constructed attack, clearly demarcated the differences between the Conservative attitudes and policies towards immigrants and ethnic voters and the Liberal policies concerning this demographic.

The Liberal leader drove the point hope with a few sentences spoken almost as a warning to immigrant voters considering backing Hudak and his anti-immigrant policies.  He stated, “It’s really important for us in Ontario to embrace globalization and to understand who we are.  We’re together, we’re in this, we’re tight, we found success in the course of our history by moving forward together.”

Although the debate left no clear winners and losers, this exchange did signal a significant alert to immigrant voters. With Hudak in the leader’s seat, we will have an Ontario that will roll-back the welcome mat when it comes to new immigrants; an Ontario that fails to acknowledge ethnic voters as citizens; and an Ontario that refuses to see the social, political and economic contributions of new Canadians.