Sima Sahar Zerehi – Once upon a time in a province called Ontario a right wing Premiere named Mike Harris ruled the land.  Harris who came into power in 1995 was best known for the “Common Sense Revolution,” the Progressive Conservative program that promised to reduce the deficit at the same time as lowering taxes.

Above all, Harris loved to make cuts; he sliced social assistance rates by twenty-two percent, slashed funding to major infrastructure projects such as the Eglinton West rapid transit line in Toronto, made incisions that crippled numerous levels of the provincial government and deprived many ministries of the necessary staff to perform their jobs. He carved through the budget for social programs, and stabbed through our provincial health care system by laying off hundreds of nurses, and closing down hospitals.

The amount of cuts that Harris mandated on a daily basis made the local 6 o’clock news look like a slasher flick.

Besides making cuts, Harris loved to sell off the Province’s social infrastructure, regardless of their profitability.  He had plans to sell major government-owned enterprises such as Ontario Hydro and the Liquor Control Board of Ontario.

While he didn’t last long enough to fully carry out his vision he succeeded in splitting off Ontario Hydro into five smaller companies that would be easier to auction off.   This marked the birth of Hydro One and the Ontario Power Generation, which control the distribution and generation of power in the province.

Harris, who knew that the people of Ontario would rebel if they discovered his real motives, disguised the fact that he was giving away our public enterprises to the highest bidder by calling the process P.P.P.’s (Private-Public Partnerships), everything in Ontario was on sale.  Pretty soon the province looked like a giant outlet mall as corporations looking for good deals circled Queen’s Park like vultures.

Under Harris, even our highways were sold to the highest bidder, with Highway 407 being leased to a private conglomerate.   This deal was distinguished as the biggest venture to privatize management of a public asset in Canada’s history.

Not surprisingly under Harris, Ontario was rife with homelessness and poverty.   A province known for its prosperity had been stripped bare to the bone.  Angry, the people of Ontario rose up in a series of strikes and days of action and finally succeeded to drive Mike Harris out of office.

To date, the tale of Mike Harris’ reign serves as a cautionary tale to voters and politicians of what happens when you let a reactionary leader with a corporate agenda rule the land.  This is the story that mayoral candidate Joe Pantalone wants all Ontarians to remember when going to the ballot box on October 25th.

When Joe Pantalone evokes the Harris legacy in his campaign he’s sending Torontonians a warning and a single message; “I’m the only progressive candidate for mayor.”

Throughout the mayoral race Pantalone has again and again used Mike Harris’ legacy as shorthand for speaking about the threat of cuts to social programs and the privatization of municipal assets.

Pantalone often compares mayoral candidate Rob Ford to Mike Harris, an association which is not hard to make considering Ford’s vocal support for Harris during his race for Premiere back in 1995 – not to mention his heavy borrowing from Harris’ political play-book of tax-breaks and cuts to social programs.

“Mr. Ford thinks – or says he thinks – we can offer more service by slashing staff who provide it, more representation by getting rid of representatives, and help people through a recession by cutting off access to affordable community services. He seems to think you build a society by leaving people to fend for themselves,” explains Pantalone.

He adds, “I do not live in his universe. I do not think most Torontonians live there. I want to invest in our quality of life. That’s what government is for.”

Pantalone has also been vocal about his critique of mayoral candidate Rocco Rossi’s schemes to sell Toronto Hydro.

He states, “in a time when we need to conserve energy, it doesn’t make sense to sell Toronto Hydro to private interests that rely on higher energy consumption and escalating rates to drive profits.”

“Privatizing Toronto Hydro is a short-sighted policy disaster guaranteed to cost us all,” adds Pantalone.

He remarks,  “Mr. Rossi’s dream of selling off Toronto Hydro is like selling the house to pay the rent. Toronto Hydro brings in millions in revenue each year, allows us to pursue our environmental goals of energy conservation while providing good jobs, and gives us an opportunity to make those jobs green.”

“Why would we give that up? Is Mr. Rossi running for Mayor, or auctioneer?”  Questions Pantalone.

Perhaps Pantalone’s harshest remarks have been targeted at his main rival George Smitherman.  In reference to Smitherman’s plans to privatize some components of the Toronto Transit Commission Pantalone states:

“Mr. Smitherman has said he will sell off bus routes – something even Rob Ford has called crazy.”

“In May, the Mayor of London, England, Boris Johnson – a Tory – bought his city’s transit system back, calling privatization ‘a colossal waste of money.’ That cost the people of London 400-million pounds – even more than Smitherman already lost on e-Health,” fires Pantalone. 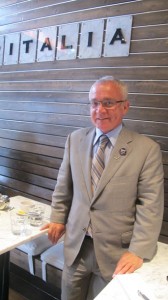 Pantalone has repeatedly tried to draw the links between Smitherman and Harris.

When an email to the provincial Tories circulated by a number of cabinet members, organizers and candidates from the Mike Harris era surfaced in support of George Smitherman, Pantalone jumped at the opportunity to comment.

In a media statement circulated by his campaign he referred to the email as a “nail in the coffin” for Smitherman.

He states: “Mike Harris is back, in the form of George Smitherman.”

In the email Harris’ former team, praised Pantalone’s rival, the statement declares: “’George Smitherman has proven he has what it takes to make the tough decisions and effect real change.”

Pantalone criticizes that “the Harris standard for ‘real change’ is devastation of the education system, public transit, and the public sector. And George Smitherman, by aligning himself so closely with Harris, has made it clear he wants to now finish the job from inside City Hall.”

He questions, “Why else would the Harris team have just endorsed him? And why would he be proud of this? Amalgamation, the gutting of public education, no new public transit for fifteen years, downloading of provincial services on to the City: these continue to hurt Torontonians.”

According to Pantalone, Toronto’s fiscal difficulties are part and parcel of Harris’ ‘Common Sense Revolution.’

“We are still suffering from the downloading of Mike Harris. We have $500 million we spend on services the provincial government used to provide that Mike Harris downloaded and they have never been uploaded,” explains Pantalone.

Speaking of Smitherman, Pantalone states “he has, again, opportunistically abandoned every reasonable, progressive person in Toronto – and abandoned any claim he might have to being a city-builder.”

“Day by day, he is becoming indistinguishable from Rob Ford. He should be ashamed,” adds Pantalone.

As election day draws closer, Pantalone continues to hope that his repeated warnings of a return to the Harris era policies of cuts and privatization will mark a turning point for Torontonias that will change the momentum from favouring frontrunners Smitherman and Ford to favouring him.

It’s unclear if the legacy of Harris is still alive in the memory of voters who tend to have political amnesia, and often return to the same remedies in times of economic crisis.

But one thing is for sure, with Pantalone in the race, we can continue to expect a healthy dose of political history in every debate and an ever-present reminder of the cautionary tale of what happened to a province that turned to cuts and privatization to dig itself out from an economic slump.

I don’t know about you, but somehow in a political era haunted by the ghost of Harris and the ‘Common Sense Revolution’ it somehow makes sense to have a Pantalone in the mix.