Sima Sahar Zerehi – The film opens with a punishing winter escape of rolling hills, barren trees and a long stretch of winding road, in the distance dark clouds hover forebodingly as the sound of howling wind pierces through the heavy silence. 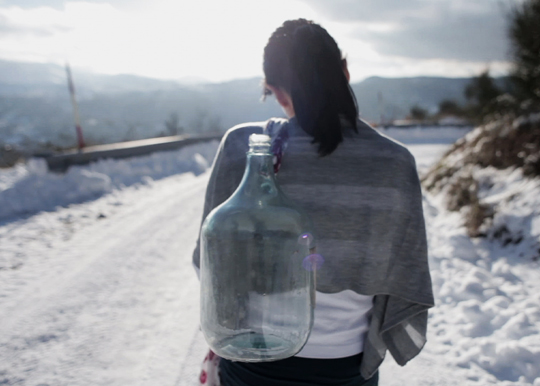 Acqua, Raha Shirazi’s second film at the Toronto International Film Festival is an eight-minute short about a girl who travels very far to bring back water.

“The essence of the film is a reflection on the idea of life and death and our connection to nature,” explains Shirazi.

Acqua is a stunningly shot meditation on the human desire to re-connect to natural elements in the grieving process.  The film is heavy with sensory cues that remind us of our physicality in the face of death. We feel the laboriousness of carrying a water basin, the harsh bite of frigid wind against parched lips, the difficulty of drawing a breath as we traverse though undulating paths.

While the details linger on the physical, the absence of dialogue, music and voiceover offer expansive spaces that encourage the mind and imagination to wander over existential questions about being and nothingness.

Shirazi shot the film in Italy this past December while participating in a workshop under the guidance of Italian filmmaker Michelangelo Frammartino. She was one of six emerging talents selected to participate in this unique opportunity.

“I am very grateful to have had the experience to work under the guidance of Michelangelo Frammartino,” explains Shirazi, and adds, “I think this is the strongest work that I have done yet.”

Shirazi who met Frammartino at the 2007 TIFF was inspired by the Italian filmmaker’s approach to cinema.

She states, “Frammartino makes narrative films that have no dialogue, he believes in cinema in its purest sense.”

This paired down approach to filmmaking was something that inspired Shirazi in the making of Acqua.

In speaking about the workshop, she states, “I wanted to make a film that reflected the place that we were at.”

While the film was shot over a day and a half in Basilica Italy, there’s a rugged Canadian sensibility that punches through the deeply lyrical pastoralism of traditional art cinema.  Shirazi approaches nature with a skeptical eye rather than a romantic sensibility. She portrays the frigid landscape, the rocky paths, the misty river as characters with quiet yet terrifying strengths.

Shirazi who holds an MFA from York University admits that her Canadian education and connections have been instrumental in fostering her career, she notes, “my entire filmmaking career has been provided for and encouraged by this country.”

Yet, she notes that her identity as an Iranian remains forefront in her consciousness. She states, “The truth is that I always view myself as first Iranian.”

Shirazi explains that many of the filmmakers that have inspired her are Iranians.

“Gav, or Cow by Dariush Mehrjui, is a great film.  I also like the work of Masoud Kimiyayi and Kiarostami’s early works, his film Close Up is one of my favourites,” lists Shirazi.

While inspired by the past generations of Iranian filmmakers, Shirazi points out that the ones to watch for are the emerging stock of Canadian filmmakers who come from various parts of the world.

She states, “There’s an entire new generation of Canadian filmmakers that are going to emerge – the height of Canadian cinema will be in their hands as they bring new approaches from their home countries.”

“All of us are somehow displaced and this comes out in the kinds of films we make,” adds Shirazi.

This year Shirazi will be one of four Iranian filmmakers participating at the Toronto International Film Festival, her film is part of the Short Cuts Canada program.

THIS IS NOT A FILM (Mojtaba Mirtahmasb and Jafar Panahi)

TIFF offers discounted group sales (available for 20-40 people, which can be booked for a specific film). Schedule available at tiff.net/festival or by calling 416-599-TIFF on or after Sept. 4.