Sima Sahar Zerehi – Their passion is palpable even when their voices are filtered through the phone line. They speak of music and poetry in long drawn out sentences that trail into each other, only pausing when breathless.

As I speak to King Raam the lead vocalist of Hypernova a New York based Iranian rock band from Tehran, and later to his Toronto based poet/songwriter girlfriend Tara Aghdashloo, about their art and collaboration on an upcoming album, I feel like a voyeur peeking behind a set of heavy red velvet curtains, getting a glimpse of a private lover’s embrace. 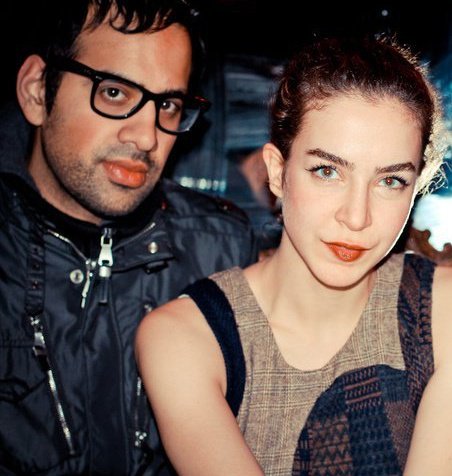 “She’s my muse,” declares King Raam, “If it wasn’t for her, none of this would have happened.”

What Raam is referring to is his latest solo project, a single titled Hunter (Shekarchi), a haunting piece that masterfully interweaves Tara’s poignant Farsi language poetry and Raam’s soulful vocals with an Iranian-flavoured post-punk musical score.

Hunter is the kind of song that you can listen to on repeat for hours without ever getting tired, the music and lyrics seem to grow and expand in your mind, morphing into ever more complex patterns of thoughts, images and soundscapes.

The percussion sounds that reverberate through the piece include the familiar echoes of Iranian tambour and daf played by Raam’s good friend and mentor Esfand.  These traditional Iranian instruments are paired with Western instruments such as an acoustic guitar, strings and horns to produce a one-of-a kind sound.

The song is a taste of what’s to come in King Raam’s soon to be released album, his first body of work featuring Farsi language lyrics courtesy of Tara.

Since its release in February 2011 Hunter has become an overnight success, receiving thousands of hits online by eager fans hoping to hear more of King Raam’s unique sound enlivened by Tara’s poetry.

Raam states, “The kind of attention and reception that the song got was very surprising to us. So we wrote another and then another.”

Tara recounts how the song made an immediate impact on listeners after airing on Parazit a weekly half-hour Farsi-language satirical television show broadcast by Voice of America.

She states, “When Parazit used the song on a segment about people in Iran who had died in the pro-democracy protests – the song’s meaning began to change – it became more political than it was intended to be – the song became a kind of anthem about Iran although it had started as something else.”

Tara adds, “Three to four weeks later we were in London where Raam was performing in a concert.   I was standing beside the stage and watching an audience of three to four hundred people and everyone was singing along to a song that I had started to write a few years ago.”

Like Raam, Tara gushes about the experience of collaborating with her partner.  She notes, “The amazing side of writing lyrics for music is that it’s not fully mine or fully Raam’s – so we share – I have a lot of confidence in him – because poetry is so close to my heart – I always thought these are my words and I don’t want anyone else to sing them.”

Tara explains that in the past she had always hesitated to put music to her poetry, she states, “Poetry is my mother tongue – to cut it in verses and pieces – those kinds of tweaks and adjustments were really new – once I got the hang of it, it was more natural – we are so comfortable working with each other.”

She adds, “The relationship helped because it was growing side-by-side with our feelings for each other – it was very raw.”

Raam shares a similar view about his collaboration with Tara.  He explains, “I don’t know what it is, if it’s the love and the passion that we have between us, all the songs that we have written together, I am so proud of them, I have never been this proud of anything that I have written before.”

Speaking about Tara he adds, “I feel so lucky to be with someone like her who has this magical ability to spew out words and they just come together so fluently, it’s really incredible.”

Tara’s also full of praise for Raam, “every time Raam plays that song I always get goosebumps.”

King Raam, who is now a household name in some circles, started his musical career in 2000 with the Iranian underground rock band Hypernova featuring Kami, Kodi and Jam.

Raam explains that it was fellow band member Kami the band’s drummer who first approached him about starting a group.

He modestly notes, “We were talking about starting a band together –I became the singer because I knew how to speak English not because I had the best voice.”

Raam who taught himself to play the guitar speaks about how it took some time for the group to find its sound and solidify itself as an entity.  He notes that the group kept on playing together for years under various names.  For Raam and his band mates music provided a necessary outlet, “the music helped us escape the madness around us in Tehran but it soon became a full time profession for us.”

By 2004 the band had made a name for itself in Tehran’s thriving underground music scene.  Raam recounts, “we had a huge fan base in the underground scene.”  He adds, “I still haven’t felt anything as exciting as those underground shows.”

Hypernova’s big break came in 2006 when they were invited to participate in the Intergalactic Iranian Music Festival in Holland.  The festival brought together various popular underground Iranian artists for a week and exposed the group to many new contacts.

Raam explains, “This was our first taste of performing on a real open stage.”

It was after this experience that Hypernova started to think of the possibility of performing outside of Iran.

Raam recounts how the band finally got a chance to play in the United States through a popular music festival “We heard about South by Southwest – recorded a crappy demo in the garage in Iran and hoped for the best.”

Despite the poor production quality of their demo, the festival organizers recognized the band’s talent.  Raam states, “We were accepted.  After seven years of playing in the underground in Tehran we were finally able to play in the US.  We were able to prove we were a legitimate band.”

When first attempting to come to the US, the band was initially denied a visa, however with the assistance of US Senator Charles Schumer the band was able to make the journey and eventually make New York their base.

Raam recounts how the decision to leave Iran was not an easy one, “After playing for several years we were reaching a dead end in Tehran we couldn’t distribute our music or perform openly.”

Raam’s experience of transitioning to his America home can be seen in the lyrics to his song American Dream where he sings, “I know that I’ll never go back home, to the life I had, the life that I had known.”

As the lyrics suggest Hypernova became a media darling in the US.  Raam states, “We were featured in New York Times and on MTV, it was  overwhelming – we were confused by the attention.”

Raam explains how those experiences with Hypernova helped other emerging Iranian bands break into the Western music scene, “We were able to set the bar and pave the ways for others to follow.”

In 2009 following the pro-democracy movement in Iran, the band released a song calling attention to the youth uprisings in the country.

Raam states, “We felt very powerless on this side of the planet watching our brothers and sisters – the song was a miniscule contribution – nothing compared to what kids were going through.”

In songs like Viva La Resistance the band captures the youthful spirit of the pro-democracy movement in Iran with lyrics like, “the empire is falling, the architects are running, it’s time to raise your voice.”

Recently Raam has been living between Toronto and New York and focussing on his solo work. He admits, “The solo project is taking a life of its own.”

His collaboration with Tara has changed his music; his new pieces are richer more soulful and blend seamlessly with the Farsi language lyrics.

There’s a sensitivity to his new sound which could be attributed to Tara’s lyrics.  Raam explains, “it’s been an interesting experience that I am singing the words of a woman – it’s completely different to try to capture the emotions in the way that she writes.”

Raam is one of the artists performing at Tirgan an Iranian arts festival taking place in Toronto’s Harbourfront from July 21 to July 24.

He states, “I’m so honoured to be included in the same league as so many respected Iranian artists.”

Tara echoes his sentiments, “I’m really proud to be part of Tirgan – the song was born in Toronto– its come full circle – its going to be played in a festival that’s doing a great deal for the Iranian community in this city.”

For a preview of King Raam’s music you can check him out at Toronto’s North by Northeast Music Festival on Wednesday June 15 at the Painted Lady at 218 Ossington.

To get a preview of Tara’s poetry in the lead up to Tirgan check out her book launch for her poetry book “This is Not a Pomegranate” on Friday June 17th at Arta Gallery on 55 Mill St. Suite 102 building 9 in Toronto’s Distillery District.