Sisters doing it for themselves

Sima Sahar Zerehi – It’s mainly a sister act.  With the addition of a brother and a few other members lending a hand to create what Melody (AbjeeZooloo) Safavi, the singer/songwriter of the Iranian-Swedish band, Abjeez, calls “Persian World Pop.”

At the center of the group are Melody and her sister Safoura (Abjeeloo) Safavi, the band’s guitarist, singer and composer.  The band also includes Nicolas (Navid) Lazo Zubieta on keyboards, percussion and saxophone; Robin (Ramin) Cochrane on drums; Erland (Ardalan) Hofgaard on bass; Johan (Javan) Moberg on acoustic guitar and Sufi (Diablito) Safavi as the sound engineer. 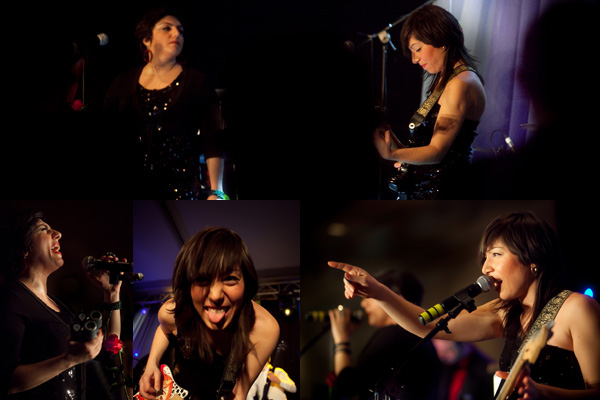 Melody admits that when the group first started getting media attention, it was hard for them to explain their unique sound to reporters, “We weren’t sure how to describe our music.  We were a fusion of various rock, reggae, and flamenco sounds with a pop music sensibility, so we coined the term Persian World Pop.”

Abjeez doesn’t only daringly mix various musical influences, but they also write and perform their songs in multiple languages including Farsi, Swedish, Spanish and English.

“We are an immigrant group,” explains Melody.  “All of us are immigrants or from immigrant families. We all speak various first languages beside Swedish, and we all had access to other languages that we had learned. It was natural for us to use these languages in our music so we could reach a broader range of audiences.”

Comedians at heart, you don’t even need to understand Farsi or Swedish to enjoy a performance delivered by the dynamic sisters whose wild facial gestures animate the music and light up audiences.  These girls are not afraid to poke fun at themselves, and nothing is sacred territory when they write and sing.

“The humour in our music is rooted in the relationship between Safoura and I.  As sisters we’re always poking fun at each other and trying to get a laugh,” explains Melody.

Although the group has a definite hammy quality there’s also a serious side to Abjeez.  In fact, many of their lyrics call attention to topical social or political issues.  A song like Biyaa or Come (http://www.youtube.com/user/Abjeez#p/u/4/pdyXklHL6PE) is a call to arms for people around the world to join the pro-democracy movement in Iran following the 2009 uprisings in the country.  The video, which features various images from the mass demonstrations in Iran, is a rallying call that emphasizes the power of love and unity in joint struggle.

Similarly, Man Baa To Hastam or I’m with you (http://www.youtube.com/user/Abjeez#p/u/5/43sSIKVRwyo) can be seen as a love song to the pro-democracy movement in Iran.

“We are not political,” admits Melody. “There was a time because of the situation In Iran when everyone became politically charged. Like any other Iranian we saw ourselves as sharing in the pain of the people of Iran.  Our music was a way for us to do something using the means that we had available to us.”

Many of Abjeez’s songs and videos also have a feminist twist raising critiques through humour of misogynistic cultural practices like arranged marriage and male dominated artistic traditions like in eddeaa or Pretention (http://www.youtube.com/user/Abjeez#p/a/u/0/0IMLhsvxVSY).  The group is also working on a new song dedicated to the Iranian queer community (http://www.youtube.com/user/Abjeez#p/u/6/ZHFhbWLzJUU).

In speaking about the social commentary in their music, Melody states, “We wanted to say something through our music. We don’t have an answer. We didn’t want to preach or offer advice in our music, we simply wanted to call attention to some issues that we thought should be debated and discussed.”

In speaking about whether music is an effective tool for social change she notes, “These are our tools, if we were doctors maybe we would do something else for social and cultural change.  Music is a great tool for creating connections with people because it’s easily accessible.  It reaches people more readily and captures peoples’ emotions.”

She notes that mixing satire with music has been extremely effective in gaining the attention of broader audiences. “More people give satire a change unlike straight political talk and speeches,” notes Melody.

These days Abjeez is divided with Melody living in the Unites States and the rest of the band residing in Sweden.

Melody admits that being in two different continents has created some real challenges for the band.  “It’s very difficult to continue to work together when we are so far away.  Financial issues are the main barriers, when a person has to do other work to support oneself it becomes hard to find the time and place to work on our music.”

Yet Abjeez continue to collaborate and perform around the world together, with their latest appearance on January 14 in Toronto.

“Because of the family relation there’s a greater sense of responsibility that we have to this project.  A brother and sister relationship, no matter how difficult at times, stays with you for life.  We understand each other really well,” says Melody.

While the familial relationships act as the glue keeping the group together, Melody explains that it can also have its drawbacks.  “There’s some family and emotional issues from our childhood or our personal lives that sometimes enter the work and interfere with our artistic relationship. But, similarly, when the work becomes really serious, sometimes family life and relations take a back seat.  There are days when we talk and realize that every time we see each other we are working on our music or performing and have had no chance to hang out with one another as family members.”

Currently Abjeez is working on their third album, which is in the process of being recorded, their previous albums HAMEH (2006), and Perfectly Displaced (2009) can be purchased on iTunes.