Sima Sahar Zerehi – Well this is embarrassing, it seems we’ve been caught with our pants down when it comes to our electoral system in Canada.  In a week when the news about fraudulent elections should be focused on Iran’s March 2nd parliamentary selections the spotlight falls on Canada.

News agencies have been abuzz with headlines of robocalls and dirty tricks that may have led to the Conservative’s narrow victory in a number of ridings in the 2011 federal election.

This is Canada’s version of the infamous 2000 US presidential election where controversies over Florida’s systemic exclusion of black voters, and the chad debacle exposed the failures of the most powerful nation’s electoral system to the world. 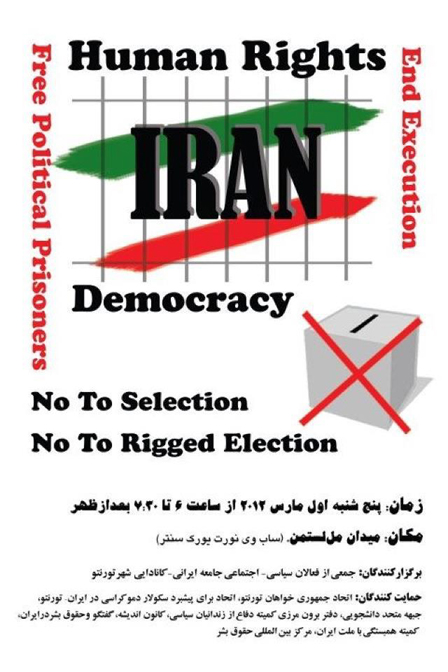 Like most politically minded Canadians, I tuned into CNN in 2000 transfixed by the images of partially punched chads, smugly shaking my head at the US’s inability to lead by example when it came to fair and transparent elections.  I remember haughtily thinking, our political system in Canada may be a bit lack-luster in comparison to our ostentatious neighbour’s, but at least it’s scandal free.

In 2009, during Iran’s fraudulent presidential elections where incumbent Mahmoud Ahmadinejad won despite the fact that no one voted for him, I remember wishing like many other Iranian-Canadians for a future where Iran, like Canada, could also hold open and democratic elections.

You live and learn. When it comes to fair and democratic elections we no longer seem to have a leg to stand on in Canada.

To date, complaints have been filed for 40 ridings impacted in the 2011 federal election.  In six of these ridings the Conservative candidates won with less than 1,000 votes.

In some cases the margins were even more dramatic; in Nipissing Ontario the Liberal incumbent Anthony Rota lost to the Conservative Jay Aspin by merely 18 votes.

The allegations include cases where voters in a number of ridings such as Guelph were contacted by official sounding automated calls or people posing as Election Canada agents and directed to non-existent polling stations.  The individuals targeted in this scheme were people unlikely to support the Conservatives.

Other allegations include charges that people posing as Liberal and NDP campaigners were making calls to undecided voters during inconvenient times such as the middle of the night in order to annoy them.

While Stephen Harper keeps to his message of  “show me the evidence” and his parliamentary secretary Dean Del Mastro claims “We have done absolutely nothing wrong,” the facts continues to pile up against the Tories.

News of the sudden resignation of a 23-year-old Tory staffer, Michael Sona, involved in the Guelph campaign during the election, only augment suspicions of foul play.

While investigations by the RCMP and Elections Canada are still underway, the misleading robocalls to Guelph voters have been traced to a burner cell phone registered under the name Pierre Poutine, of Separatist Street in Joliette, Quebec.

MPs from the Liberal and NDP parties are calling for more sweeping independent inquiries to unearth the truth about the allegations of electoral tampering.

While the robocalls and crank calls may be comedic fodder to some Canadians, providing much needed levity in a prosaic parliamentary system in desperate need of some drama, Iranian-Canadians aren’t laughing.

In the lead up to this week’s Iranian parliamentary elections or more accurately selections, as even the candidates are hand-picked by the regime, the Iranian government has launched an unprecedented campaign of terror against its citizens.

Speaking to the breadth and depth of this crack down is a 71-page report released on February 28, by Amnesty International, titled ‘We are ordered to crush you’: Expanding Repression of Dissent in Iran.

“In Iran today you put yourself at risk if you do anything that might fall outside the increasingly narrow confines of what the authorities deem socially or politically acceptable,” stated Ann Harrison, Interim Deputy Director of Amnesty International’s Middle East and North Africa Programme.

“Anything from setting up a social group on the internet, forming or joining an NGO, or expressing your opposition to the status quo can land you in prison,” adds Harrison.

While incidents of arrests, torture, forced confessions and executions inside Iran have intensified in the wake of the parliamentary elections, there are also disturbing cases of the Iranian regime targeting individuals and groups outside of its borders.

The Amnesty report highlights how family members of journalists working outside of Iran have also come under attack.  The report highlights the January 17, 2012 arrest of the sister of a BBC Persian employee, who was held in solitary confinement and subjected to an on-camera forced confession.

According to Mark Thompson, the Director General of the BBC, other family members of BBC Persian staff have had their passports confiscated, preventing them from leaving the country.

Thompson also noted that some BBC Persian staff have had their Facebook and email accounts hacked and others have faced a “stream of false and slanderous accusations in the official Iranian media, ranging from allegations of serious sexual assault, drug trafficking, and criminal financial behaviour.”

In light of these sweeping attacks against Iranians both inside and outside of Iran, designed to frighten voters into submission prior to the parliamentary elections, members of Canada’s growing Iranian community were looking to Canada for leadership on tackling Iran’s human rights violations.

Unfortunately, people in glass houses shouldn’t throw stones.  As a result of the recent allegations of electoral tampering in Canada it will be so much harder for the Canadian government to command the kind of moral authority needed to take Iran to task for its fraudulent electoral process and human rights abuses.

For Iranian-Canadians our task to achieve democratic change, respect for human rights and freedom of expression in Iran has just become more burdensome.  Today, as a community with roots in Iran and homes in Canada, we find ourselves having to not only fight for free, democratic and transparent elections in our homeland in Iran but also in our adopted homes in Canada.

Iranian-Canadians know that in order to fight the tyranny of the Islamic regime we need to have powerful allies in the international arena, the Canadian government was always one of those allies, however, it seems that first we have to take Toronto and then reach for Tehran.

In Toronto a protest against the Iranian Parliamentary Selection is organized to call attention to human rights abuses and executions in Iran.  The rally will take place on Thursday March 1, 2012 at 6pm at Mel Lastman Square (Yonge & North York Centre).

When One Billion Dance